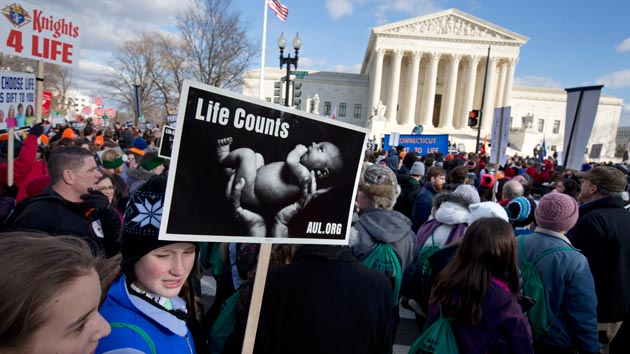 On Wednesday, the Supreme Court will hear arguments in what both sides of the abortion debate consider the most important abortion case in a generation. At issue in Whole Woman’s Health v. Hellerstedt is HB 2, an omnibus Texas abortion law passed in 2013 that has contributed to the closure of more than half of the abortion clinics in the state. The recent death of Justice Antonin Scalia has added a new layer of complexity to the possible outcomes, but the court’s decision in this case could transform the landscape of abortion access far beyond Texas.

The Texas law under consideration first made national headlines in 2013 when state Sen. Wendy Davis filibustered the bill in the state’s Legislature, standing on her feet for 11 hours in pink sneakers that have since become a symbol of the fight for abortion rights. She spoke of “the dark place it will take us,” referring to the potential harm to Texas women of the bill’s proposed abortion restrictions. The bill passed anyway.

In Whole Woman’s Health, the Supreme Court will consider two provisions of HB 2: the requirement that abortions be performed only in ambulatory surgical centers, hospital-like facilities usually used to perform outpatient surgery, and the mandate that doctors performing abortions have admitting privileges at a nearby hospital. Medical groups, including the American College of Obstetricians and Gynecologists, have repeatedly noted that these restrictions are not necessary to provide safe abortion care, while anti-abortion groups contend that the restrictions are crucial to protect women’s health.

The court will have to decide whether these restrictions constitute an “undue burden” on a woman’s right to get an abortion. This standard was established in the court’s 1992 decision in Planned Parenthood v. Casey, which upheld a woman’s right to terminate a pregnancy but allowed states to regulate this right, provided that state laws don’t place an “undue burden” on women. If the justices uphold the Texas law, they could expand the “undue burden” standard, greenlighting the evolution of more Texas-like abortion restrictions across the country and cementing the ones that already exist: 22 states require abortion clinics to meet the standards of ambulatory surgical centers.

The “undue burden” standard is already ambiguous, but it has provided some protection for clinics fighting to stay open. The plaintiff in this case, Whole Woman’s Health—which runs three abortion clinics in Texas—has used the standard in lower courts to put dents in HB 2. In 2014, lawyers from the Center for Reproductive Rights successfully argued in a Texas state court that the ambulatory surgical center provision places an undue burden on women seeking to exercise their right to an abortion. The restriction would lead to so many clinic closures, CRR’s lawyers argued, that thousands of women would be forced to make costly and time-consuming trips of hundreds of miles within Texas to get an abortion; other women would have to cross state lines to obtain an abortion in New Mexico.

The state court ruled in Whole Woman’s Health’s favor, striking down the ambulatory surgical center requirement because it “burdens Texas women in a way incompatible with the principles of personal freedom and privacy protected by the United States Constitution for the 40 years since Roe v. Wade.”

Less than a year later, the 5th Circuit overruled this decision, allowing the ASC provision to move forward. The Supreme Court intervened and put an emergency hold on the rule as the high court decided whether it would review the law. If the Supreme Court upholds the 5th Circuit decision, at most 10 clinics will remain open in Texas—which translates to roughly one clinic per every half million women of reproductive age in Texas.  A 2015 study conducted by the Texas Policy Evaluation Project estimated that 100,000 to 240,000 Texas women have tried to self-induce abortions, and that it’s possible the rate of attempted self-induction is rising as a result of added abortion restrictions and clinic closures in the state.

Other states have replicated the Texas model: passing their own laws with abortion restrictions similar to those in HB 2 and resulting in the closure of clinics. Today, six states—North Dakota, South Dakota, Mississippi, Missouri, Louisiana, and Wyoming—each have only one remaining abortion clinic, and several of these last clinics are at risk of closing if the court sets a national precedent upholding the surgical facilities and admitting privileges requirements.

“The Court now has the opportunity to decide whether we will continue to allow elected officials to play politics with women’s health,” wrote Ilyse Hogue, the president of NARAL Pro-Choice America, in a November 2015 statement. “This case represents the greatest threat to women’s reproductive freedom since the Supreme Court decided Roe vs. Wade over 40 years ago. Laws like the ones being challenged in Texas are designed to subvert the Constitution and end the right to a safe and legal abortion.”

With the death of Justice Antonin Scalia, a 4-4 split decision is likely, meaning the 5th Circuit’s decision to fully uphold HB 2 stays put. This would reinforce existing abortion regulations in Texas, Mississippi, and Louisiana—states that are within the 5th Circuit and already have restrictive laws. But it would also mean that the high court can’t issue a broader decision that would enable more abortion restrictions nationwide. As my colleague Nina Liss-Schultz explained, “Upholding the lower court’s decision would mean there would be no federal precedent determining whether admitting privileges and strict architectural standards are fair game for states interested in restricting abortion.”

In all likelihood, Justice Anthony Kennedy will determine whether this case will end in a 4-4 deadlock or in a 5-3 decision. Kennedy has historically wavered on abortion—in Casey, Kennedy famously changed his mind at the last minute, leading to the court’s 5-4 decision to reaffirm Roe v. Wade. “Now, however, with Scalia’s seat vacant and the Court evenly divided between Democratic and Republican appointees,” writes Think Progress fellow Ian Millhiser, “the likelihood HB2 will be upheld outright is vanishingly small.”