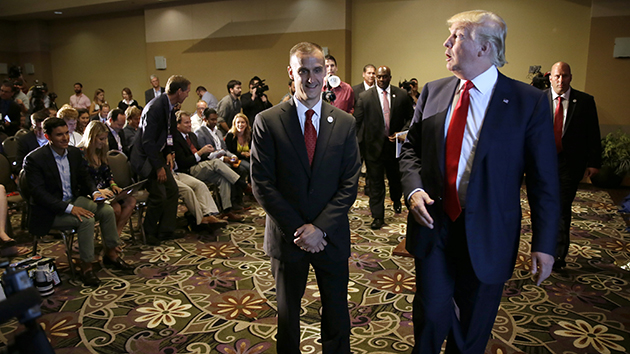 The conservative news website Breitbart News is in a tailspin. Six people have left the organization since Friday, and more departures are expected. The implosion, of course, was set off by the outlet’s tepid response to allegations from one of its own reporters, Michelle Fields, that Donald Trump’s campaign manager had violently grabbed her at a rally last Tuesday in Florida.

The episode forced Breitbart, a Trump-friendly site, to choose between its reporter and its favorite candidate. (Breitbart‘s Washington political editor, Matthew Boyle, reportedly boasted in January that he would be named White House press secretary in a Trump administration.) Breitbart‘s leadership essentially chose Trump, issuing only a hesitantly worded request for an apology from Trump’s campaign manager, Corey Lewandowski, even after the Trump campaign began to smear Fields.

With conservatives taking sides on the issue—and many siding with Fields and against Trump and Breitbart—the incident is a microcosm of the larger schism within the Republican Party and a telling look at what can happen when a news outlet gets too cozy with one candidate.

Here is a timeline of the epic meltdown:

Tuesday, March 8: Donald Trump holds a press conference following a series of primary elections. After the conference, Michelle Fields asks Trump a question about affirmative action as he heads toward the exit. Before Trump can respond, someone grabs Fields by the arm and nearly pulls her to the ground. Washington Post reporter Ben Terris identifies the man who grabbed her as Corey Lewandowski, Trump’s campaign manager.

Wednesday, March 9: In the early hours after the incident, Breitbart responds by issuing a tepid statement demanding an apology from Lewandowski “if” Terris’ account of what happened is true.

“It’s obviously unacceptable that someone crossed a line and made physical contact with our reporter,” Breitbart president and CEO Larry Solov says in a statement. “What Michelle has told us directly is that someone ‘grabbed her arm’ and while she did not see who it was, Ben Terris of The Washington Post told her that it was Corey Lewandowski. If that’s the case, Corey owes Michelle an immediate apology.”

The Daily Beast reports that Lewandowski acknowledged to Boyle that he had manhandled Fields.

Thursday, March 10: Fields publishes her own version of the events.

Later the same morning, Trump’s spokeswoman, Hope Hicks, issues a statement calling Fields’ accusations “entirely false.” Hicks claims there were no witnesses, despite the fact that Terris saw the entire thing, and questions Fields’ trustworthiness as a reporter.

Fields responds by tweeting a photo of her bruises to Lewandowski and Trump.

Lewandowski takes to Twitter to deny Fields’ claims and smear her as a fabulist who makes up stories to get attention.

Politico obtains audio of the incident, including Fields and Terris talking immediately after it happened, that backs up their version of the story.

A number of conservatives begin to speak out in support of Fields and call on Trump to fire Lewandowski.

After a Republican debate in Florida, the candidate himself denies the attack happened. “Perhaps she made the story up,” Trump says. “I think that’s what happened.”

Friday, March 11: Lewandowski continues his barrage of Twitter abuse against Fields with this tweet shortly after midnight:

@MichelleFields you are totally delusional. I never touched you. As a matter of fact, I have never even met you.

Later in the morning, Fields files a criminal complaint against Lewandowski in Jupiter, Florida, where the alleged battery took place.

A few hours later, Breitbart undercuts Fields by publishing a story questioning her account. The story uses videos and a series of screen shots to suggest Terris misidentified Lewandowski, confusing him for a security guard, and that Fields’ bruises “may have been accidental.”

The new footage leads Breitbart to update its story and change the headline to “Video Shows Lewandowski Reaching in Michelle Fields’s Direction.”

Breitbart spokesman Kurt Bardella resigns from the outlet over its handling of the situation.

Saturday, March 12: BuzzFeed publishes internal chats at Breitbart on the web messaging platform Slack, which show senior editor-at-large Joel Pollak ordering staff to stop publicly supporting Fields. “STOP tweeting about the story,” Pollak wrote in one chat. “Stop speculating about the story.” He reminded the staff, “You were given explicit instructions.”

When one staffer objected that “silence is abandoning our team member,” Pollack responded that he must “wait.”

“I do not believe Breitbart News has adequately stood by me during the events of the past week and because of that I believe it is now best for us to part ways,” Fields says in a statement to BuzzFeed.

Shapiro, who called for Trump to fire Lewandowski, says the news organization has betrayed the legacy of its founder, Andrew Breitbart, who died in 2012.

“In my opinion, [Breitbart News chair] Steve Bannon is a bully, and has sold out Andrew’s mission in order to back another bully, Donald Trump,” Shapiro says in a statement shared with BuzzFeed. “He has shaped the company into Trump’s personal Pravda, to the extent that he abandoned and undercut his own reporter, Breitbart News’ Michelle Fields, in order to protect Trump’s bully campaign manager, Corey Lewandowski, who allegedly assaulted Michelle.”

Shapiro continues, “Both Lewandowski and Trump maligned Michelle in the most repulsive fashion. Meanwhile, Breitbart News not only stood by and did nothing outside of tepidly asking for an apology, they then attempted to abandon Michelle by silencing staff from tweeting or talking about the issue. Finally, in the ultimate indignity, they undermined Michelle completely by running a poorly-evidenced conspiracy theory as their lead story in which Michelle and Terris had somehow misidentified Lewandowski.”

Monday, March 14: Breitbart posts a story savagely mocking Shapiro the morning after his resignation. The story is published under the byline William Bigelow, which turns out to be the pseudonym used by Shapiro’s father, David Shapiro, who also resigned from the outlet the previous night. “Breitbart put this under his byline because they knew I’d have to out him,” Shapiro tells Politico. “The fact they would use my father’s pseudonym in order to attack me just exposes how despicable they are.” The post, later deleted, can be read here. Pollack apologizes, saying the article was written in jest and did not go “through the normal editorial channels.”

The Independent Journal Review, a conservative outlet, publishes more of Breitbart‘s internal chats showing staff displeased with how the outlet has handled the situation.

The resignations continue as national security reporter Jordan Schachtel and editor Jarrett Stepman step down. “[I]n my opinion we are working with or perhaps even taking direction from a presidential campaign, which is unacceptable journalistic behavior,” Stepman says in a statement. “I believe Breitbart News is becoming less of a news site and more of a propaganda organization dedicated to the Trump campaign.”

Fields appears on Megyn Kelly’s Fox News show Monday night, where she recounts how Boyle responded when he heard she had been manhandled. “When this happened, my Washington editor Matthew Boyle was telling me, ‘Oh don’t worry, this is going to be great, because Donald Trump’s going to give us so many exclusives now, because they’re going to feel like they have to do it because of what they did,'” Fields tells Kelly. “This is how my company was looking at this. Instead of saying, ‘Wow, what happened, are you okay, let’s defend you,’ they were thinking that this was a good thing because we would get more access to Donald Trump.”

Fields says Lewandowski acknowledged to Boyle that he had indeed grabbed her. “My editor, as soon as it happened, had spoken to Corey,” she says. “He told me that Corey had admitted to it, and I was getting an apology, so I stayed quiet. I wasn’t going to make a big deal about it.”

Tuesday, March 15: Politico publishes a story on Lewandowski’s past behavior toward women. According to the story, when Lewandowski worked at Americans for Prosperity, a group backed by the Koch brothers, he called a subordinate woman the C-word in front of several colleagues.

Politico also notes that reporters saw Lewandowski’s conduct toward Fields as part of a pattern.

[O]ther reporters who have covered the Trump campaign described instances in which Lewandowski was rough with journalists, using his body to push reporters away from the candidate…

Additionally, reporters told POLITICO that Lewandowski has made sexually suggestive and at times vulgar comments to?and about?female journalists who have covered Trump’s presidential bid. One reporter who was on the receiving end of such comments described them as “completely inappropriate in a professional setting.”