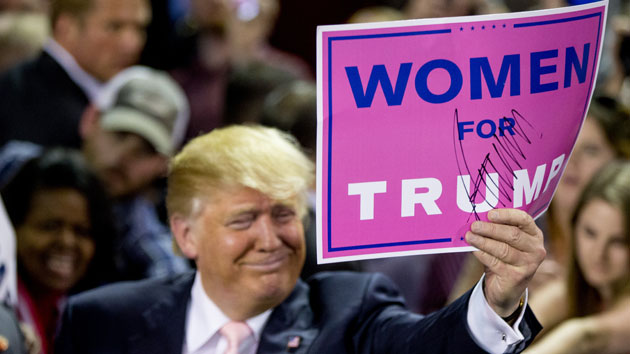 Donald Trump says he loves and respects women. Yet for decades he has uttered boorish comments that undermine that assertion, and in recent weeks his misogynistic remarks have become fodder for journalists (see here and here). Moreover, Trump’s attitude toward women has been a campaign issue—and it could become a major battlefront should he win the Republican presidential nomination. When Fox News host Megyn Kelly at a debate in August pressed Trump about his past derogatory remarks about women, he launched a feud against her and the conservative network. This week, a super-PAC run by a former Mitt Romney operative released a commercial in which a series of women quote ugly comments about women attributed to Trump. In these statements, Trump derided women as “dogs,” said he wouldn’t help raise his own children, and declared his preference for women with large breasts. On Wednesday, Trump posted an attack video showing Hillary Clinton barking like a dog.

As reporters and opposition researchers continue to dig into Trump’s past, they are likely to find more evidence that he harbors a negative or chauvinistic view toward women. Here are other examples—so far unreported or not widely noticed—to add to the list:

In the early 1990s, shock jock Howard Stern hosted an interview show on the E! network, and Trump was the featured guest on one episode. Stern, no surprise, wanted to discuss—and drool over—Trump’s active dating life, and the tycoon obliged him. Trump acknowledged he judged women on their looks: “I tend to like beautiful women more than unattractive women. I don’t know, maybe that makes me bad.” But what was more telling was an exchange in which Trump indicated he believed there was something “sick” about women that caused them to be attracted to men who treat them poorly.

Stern began this part of the discussion by saying to Trump, “You once said that the best way to treat a woman is to treat her like doody.” The conversation continued:

Trump: No, I never said that…It was attributed to me.

Stern: But I’ll tell you something: I agree with that statement.

Stern: They don’t listen otherwise. I tell you, women are troublemakers…So you never did say that?

Trump: No, I never said that, but it was attributed to me.

Stern: So you treat women with respect?

Trump: I can’t say that, either.

Trump quickly added, “I treat women with great respect.” Yet the two were not done with this subject. A few moments later, Stern asked Trump whether Marla Maples, his girlfriend at the time, would be upset if he were to see other women. Trump said, “Probably not.” Stern exclaimed, “Unbelievable!” And Trump tried to explain:

Trump: You said that women like being treated badly.

Trump: There’s something to that. It’s sick, isn’t it?

Trump appeared to be saying he thought Stern was on to something with his treat-women-badly theory—even if he had not said the quote attributed to him. Later in the show, at Stern’s request, Trump ranked women he has “had” and women he had been linked to in the gossip press.

In 2003, Trump went on Stern’s radio show, and the discussion was the usual fare. Stern discussed having hot-tub oral sex with Melania, Trump’s wife-to-be. Trump bragged that he could estimate a woman’s weight within half a pound. Stern asked Trump to name the “three hottest chicks you’ve seen.” Stern declared that Jennifer Lopez couldn’t be on the list because “her ass is too fat.” Trump replied, “You know, I really like J. Lo, but that ass is…” Trump then asked,” Do you really want me to do this?” Of course Stern did. “I’m very, very good at it,” Trump said. And he cited Keira Knightley, Paris Hilton, and his daughter Ivanka. He noted that he had watched Hilton’s sex video.

“You never get to the face because the body’s so good.”

A year later on Stern’s radio show, Trump boasted that the National Enquirer recently had published a story saying, as he put it, “that in the history of the world, nobody has gotten more beautiful women than I have.” Moments later, he and Stern were discussing tennis pro Steffi Graf. Trump called her a “great girl,” and Stern replied, “She’s not hot.” Trump responded, “She’s got one of the greatest bodies ever.” Stern shot back: “But what about the face?…[The] body’s a 10. What’s the face?” Trump had an answer: “Well, you never get to the face because the body’s so good.”

“how do the breasts look?”

In 2005, Trump was back on Stern’s radio show. The conversation ranged toward the juvenile, and at one point Stern asked Trump if he would still love Melania if she were disfigured in a horrible car accident. Trump replied, “How do the breasts look?” Stern said that in this scenario the breasts were not injured, and Trump responded, “Okay, well that’s important.” He did say he would “stay with her 100 percent.” (It was during this interview that Trump said he wouldn’t take care of any kids Melania would have; he’d just pay for them.)

“They Want to torment me.”

A video posted on YouTube in 2007 showed Trump entering a large auditorium in Toronto to give a seminar on success. Loud music was blaring. The crowd was applauding. And a squad of enthusiastic, fist-pumping cheerleaders—men and women—greeted his arrival on the stage. Trump’s first words were to tell the guys to leave the stage. The women could stay, he said. But he didn’t call them women. He said, “And the girls—we’re supposed to call them women, but they’re girls to me—the girls, you can stay the entire speech.” He then did request the women to leave, too: “They want to torment me, and they always have beautiful women over here, and I’m sitting up making this speech, and I can’t stand it. Girls, get off this stage right now.”

“i find women to be much more aggressive than men.”

In 1997, Trump appeared on Conan O’Brien’s show, and the host asked about his dating life. Trump didn’t provide many details, but he did expound on his views on women and sex. As he put it:

Moments later, he showed O’Brien what was in his jacket pocket: a condom.

Objectifying women, judging them based on appearance, suggesting they like being mistreated—all of this has been part of Trump’s long-running playboy schtick. His history of oafish remarks will certainly continue as a campaign controversy, especially if he snags the GOP nomination and ends up facing Clinton in the main event.