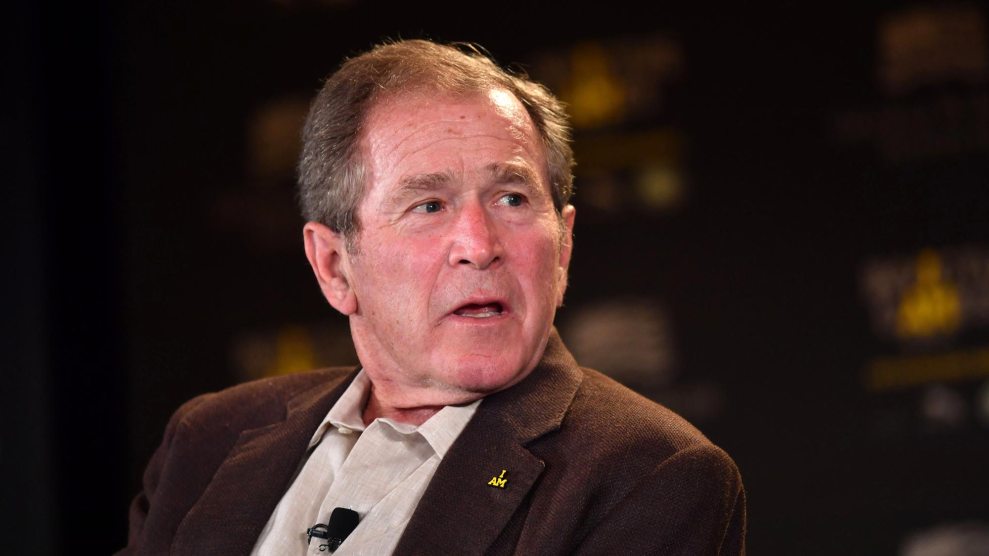 Earlier this week, former President George W. Bush accepted an award from the World Congress of Families, a social conservative group that has played a leading role in fostering anti-gay movements and legislation abroad, including a widely condemned measure in Russia that criminalized the public expression of same-sex relationships.

The World Congress of Families, which awarded Bush its “Family and Democracy Pro-Life Award” at its conference in Tbilisi, Georgia, is the main project of the Illinois-based Howard Center for Family, Religion and Society. In 2014, Mother Jones reported on the group’s involvement in helping to bolster the nascent anti-gay movement in Russia, where WCF representatives met with legislators and other high-ranking individuals who helped pass the so-called “gay propaganda” law. The law, which inspired anti-gay attacks in Russia, garnered international outrage in advance of the Winter Olympics held in Sochi. The WCF has also supported anti-gay rallies, legislation, and more throughout Eastern Europe, in countries like Serbia, Poland, Romania, Lithuania, Latvia, and the Czech Republic. The organization has been designated an anti-LGBT hate group by the Southern Poverty Law Center, which called it “one of the key driving forces behind the U.S. Religious Right’s global export of homophobia and sexism.”

Bush did not attend the WCF conference this week, but he sent a letter thanking the group for the pro-life award and praising its work: “I commend your efforts to recognize the importance of families in building nations. Your work improves many lives and makes the world better.”