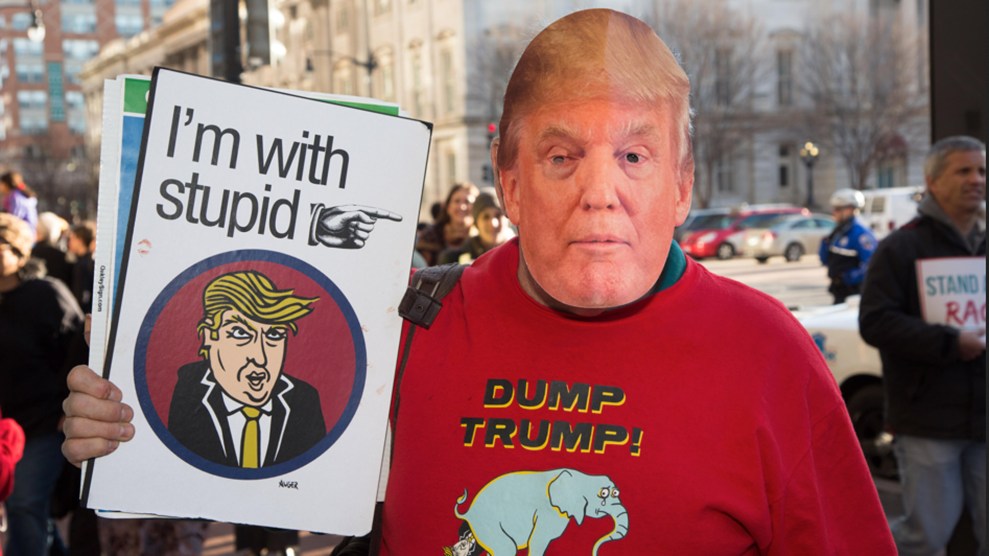 Last February, New York Republican Rep. Peter King said Donald Trump was “not fit to be president, morally or intellectually.” In early May, he endorsed Trump. And King is not alone. Where many Republican Party members were once focused on Trump’s negatives, they’re now courting him. Like King, Texas Sen. John Cornyn, who previously labeled Trump an albatross, is endorsing him, tweeting pictures of himself with the smiling businessman.

You might think this is just typical Washington—politicians changing their alliances with the wind to curry favor with the current power broker. But if you look closer, you’ll see this change isn’t just a Washington phenomenon. According to Gallup, Trump’s favorability among Republicans just hit a record high. What’s important to recognize here is that favorability ratings, unlike head-to-head preference polls, offer direct insight into how much people approve of a candidate, not just whether they’re willing to hold their noses and vote for one to beat the other. What’s going on? It’s not as if Trump has sworn off insulting tweets or explained away past actions that troubled many. What happened to #NeverTrump?

As a psychologist, I’ve studied decision-making, especially of the moral type, for over a decade, and research I’ve done with Claremont McKenna psychologist Piercarlo Valdesolo that examined how people evaluate others’ virtues offers some insight into why Trump’s fortunes are on the rise.

The mind evolved to be adaptive, not saintly. This fact doesn’t excuse hypocritical behavior, but it does help to explain why it’s so prevalent.

As more and more candidates dropped out of the primary race, Republicans who initially thought Trump unfit to be president faced a quandary: Willfully embracing him would mean recognizing that their decisions about whom to support were opportunistic rather than principled. That’s a difficult pill to swallow as no one wants to see themselves as a hypocrite. But everyone does want their team to win.

Luckily for Trump—or, for that matter, any other candidate who might find himself or herself in the same situation—the human mind has a built-in solution for this problem: the whitewash. When faced with the option to either stand on principle or gain advantage, people tend to go with the latter. And if that means rewriting your perceptions, the mind is more than happy to comply while maintaining the illusion that you were doing what was right all along.

To examine just how deeply this trait is embedded in the mind, Valdesolo and I designed a simple experiment (the results of which were published in Psychological Science). We brought people into a room one by one and told them they’d need to complete one of two different tasks: a short fun one or a long, more onerous one. There was one catch, though. In order to make sure equal numbers of people completed each of the two tasks, we told our participants that the next person in line would be assigned to work on whichever task remained (which wasn’t actually true). We also told participants that the fairest way to determine who got stuck with the long task was to flip a virtual coin we had set up on a computer screen next to them.

We then left the room but watched what unfolded via hidden video. Fully 90 percent of people cheated. They either assigned themselves the short task without flipping the coin or disregarded the results of the initial flip, which we had preset to assign them to the long task. When people cheated, they knew full well that they were unfairly dooming the “next person” to drudgery. Then, at the end of the experiment, we asked people to judge how fairly they felt they had behaved.

We also had people watch an actor who they believed to be a normal participant go through the same steps. This actor would always cheat by ignoring the coin flip and giving himself the short, fun job. After watching him, we asked people to judge how fairly they thought he had behaved. As we expected, people viewed their own cheating behavior as relatively acceptable but had no hesitation in condemning an identical transgression when committed by another. Hypocrisy pure and simple.

We had one last thing to figure out, though: if being affiliated with a group produces a similar whitewash. So Valdesolo and I added a new twist to the experiment. To get people to believe they were part of a specific group, we asked them to give us estimates on some obscure facts (e.g., the number of bears in Massachusetts, the number of planes that take off from Logan Airport each day) and then told them they were either the type of person who overestimates or underestimates things.

To denote which group they belonged to, we gave them either a red or blue wristband. Then, as in the earlier part of the study, we had them watch an actor assign himself to one of the tasks. Like before, the actor cheated at what people thought was the expense of another person. This time, though, the actor was wearing a wristband to indicate that he belonged to one of the two groups. When we then asked people to evaluate how fair he had been, another striking difference emerged. If the actor was a member of a participant’s group—a group that we had just created out of thin air—he was perceived as behaving more morally than if he was a member of a different group.

Believing that you’re a good person is important for self-esteem, but convincing yourself that someone on your team is worthy of support can offer something more: You’re likely to gain from his or her ill-gotten success. And that gain is the source of this self-serving bias. After all, the mind evolved to be adaptive, not saintly. This fact doesn’t excuse hypocritical behavior, but it does help to explain why it’s so prevalent.

So if you’re a Republican, Trump is now your standard-bearer, and the easiest way to come to terms with this fact is to lessen his sins. For example, if you were concerned by Trump’s initial failure to distance himself from the Ku Klux Klan’s David Duke, your mind can soften this blemish. That’s what Utah Sen. Orrin Hatch might have done once he realized his favored candidates weren’t likely to prevail; Hatch told himself, and the press, that “deep down” Trump doesn’t tolerate racist organizations, he’s just “inexperienced in expressing himself” about it. Hatch seemed to believe that Trump’s behavior really wasn’t that problematic after all.

Of course, this tendency isn’t a Republican problem; it’s pan-human. The only reason it isn’t happening as much to Democrats right now is there hasn’t yet been a lot of need to change alliances. If and when Sanders drops out, something similar might happen to those feeling the Bern. What this innate bias does mean, though, is that once Trump became the likely front-runner, #NeverTrump never had a chance. Just as the movement needed to gain steam, its fires—the blemishes of its targeted “apostate”—were fading out by virtue of the motivated, if not objective, moral mind.

David DeSteno is a professor of psychology at Northeastern University.