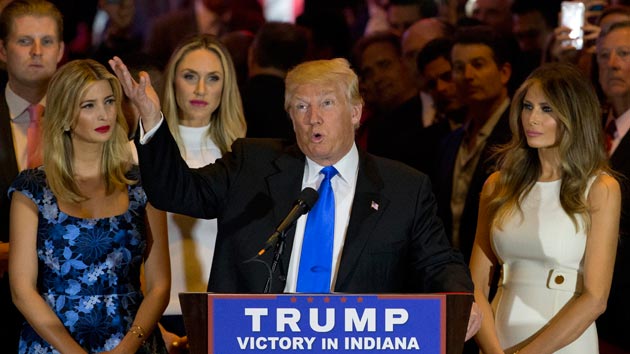 After Ted Cruz bowed out of the presidential race on Tuesday night following a devastating loss in the Indiana primary, a victorious Donald Trump—now the presumptive GOP presidential nominee—spoke from Trump Tower.

A subdued Trump opened the speech by thanking his family. He later praised Cruz as “one hell of a competitor,” and a “tough, smart guy” with “an amazing future.” He also thanked the Republican National Committee, saying he had just gotten off the phone with RNC Chairman Reince Priebus. ?“He had 17 egos,” Trump said of Priebus having to deal with the initial Republican field, “and now I guess he’s down to one.” Earlier in the night, the RNC chairman tweeted that Trump was now the presumptive GOP nominee and called on Republicans to rally behind him to defeat Hillary Clinton.