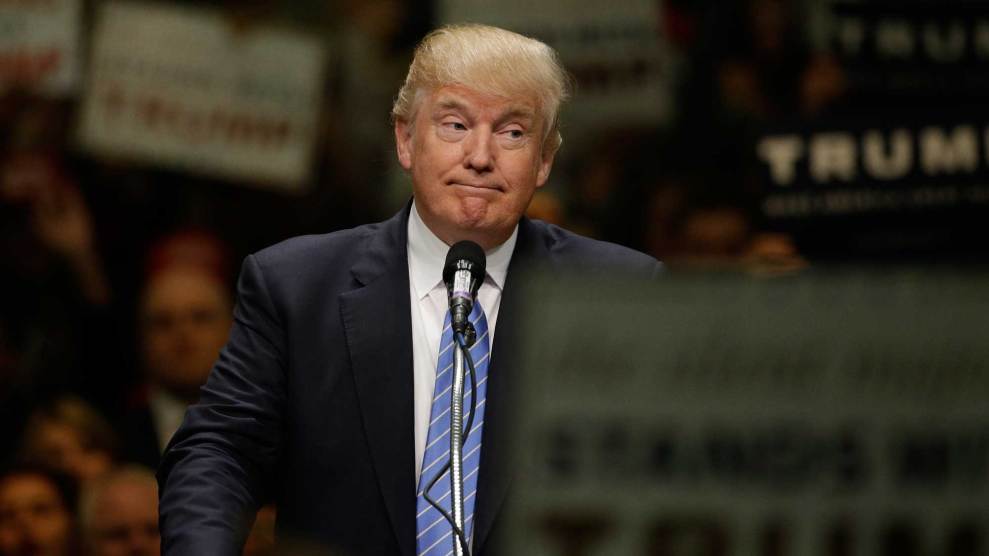 In his most recent financial disclosure statement, Donald Trump notes he has billions of dollars in assets. But the presumptive GOP nominee also has a tremendous load of debt that includes five loans each over $50 million. (The disclosure form, which presidential candidates must submit, does not compel candidates to reveal the specific amount of any loans that exceed $50 million, and Trump has chosen not to provide details.) Two of those megaloans are held by Deutsche Bank, which is based in Germany but has US subsidiaries. And this prompts a question that no other major American presidential candidate has had to face: What are the implications of the chief executive of the US government being in hock for $100 million (or more) to a foreign entity that has tried to evade laws aimed at curtailing risky financial shenanigans, that was recently caught manipulating markets around the world, and that attempts to influence the US government?

Trump’s disclosure form lists 16 loans from 11 different lenders, totaling at least $335 million, and the aggregate amount is likely much more. Deutsche Bank is clearly his favorite lender, and Trump’s financial empire has become largely dependent on his relationship with this major player on Wall Street and the global markets. The German bank has lent him at least $295 million for two of his signature projects. In 2012, Deutsche provided Trump with $125 million to help him buy Trump National Doral golf course. Last year, it handed Trump a $170 million line of credit for his new hotel project on Pennsylvania Avenue in Washington, DC.

Should Trump move into the White House, four blocks away from his under-construction hotel, he would be its first inhabitant to owe so much to any bank. And in recent years, Deutsche Bank has repeatedly clashed with US regulators. So might it be awkward—if not pose a conflict of interest—for Trump to have to deal with policy matters that could affect this financial behemoth?

Richard Painter, an attorney who teaches at the University of Minnesota and who was the chief ethics lawyer for President George W. Bush from 2005 to 2007, says a situation in which a sitting president owes hundreds of millions of dollars to any entity, especially a bank that jousts with regulators, is disturbing. There have been wealthy presidents and vice presidents, Painter notes, pointing to John Kennedy, Franklin Roosevelt, and Nelson Rockefeller, but none were as heavily leveraged as Trump. “They had large assets and usually diversified assets. They weren’t in a situation where someone could put pressure on them to do what they want,” Painter remarks. “Whereas having a president who owes a lot of money to banks, particularly when it’s on negotiable terms—it puts them at the mercy of the banks and the banks are at the mercy of regulators.” Painter adds: “In real estate, the prevailing business model is to own a lot but also owe a lot, and that is a potentially very troublesome business model for someone in public office.”

Members of a Trump cabinet would have to recuse themselves from any government business that would have a direct impact on their personal financial interests. If a Treasury secretary held this sort of loans, he or she could not participate in policy deliberations and actions that might have an impact on Deutsche Bank—and that would likely be many. But the president and vice president are excluded from this requirement. As president, Trump would have no obligation to divest his vast business holdings, though recent presidents and presidential candidates have taken steps to avoid any concern. President Barack Obama has even put off refinancing his Chicago home to save money because it would mean establishing a financial relationship with a bank, and that could prompt questions.  In 2011, Mitt Romney promised to use a blind trust for his substantial personal business interests, though there were concerns regarding how “blind” the trust was.

Trump’s relationship with Deutsche Bank means he is in league with a financial giant that has been at odds with US government regulators and has attempted to skirt reforms designed to prevent Wall Street firms from wrecking the US economy once again. Last year, around the same time Trump secured the $170 million for the Washington project, Deutsche Bank agreed to pay a $2.5 billion fine to regulators here and abroad for its role in rigging interest rates. This included $600 million to the New York State Department of Financial Services, $800 million to the Commodities Futures Trading Commission, and $775 million to the Department of Justice. As Reuters reported, “Slamming Germany’s largest lender for ‘cultural failings,’ regulators squarely blamed senior staff for misleading them, failing to be open and cooperative, and prolonging the investigation.” From roughly 2003 to 2010, as the news service put it, the bank ran a scam to “fix rates…used to price hundreds of trillions of dollars of loans and contracts worldwide.” The bank also recently reached settlements in lawsuits alleging it had manipulated prices for precious metals and their derivatives.

Like most big banks, Deutsche Bank has been at odds with regulators over the 2010 Dodd-Frank financial reform measure. But it went to unusual lengths to dodge some of the law’s requirements. For years, the bank operated in the United States through two subsidiaries that were legally considered to be American entities. Yet in 2012—after Dodd-Frank was enacted—the bank tried to rewrite its own corporate structure to make it less American. Under the new law, a foreign-based bank’s subsidiaries were required to maintain certain minimum levels of capital—as much as $20 billion worth of reserves in Deutsche Bank’s case—so that the bank could weather another financial catastrophe like the one that occurred in 2008. The consequence of the rule also restricted how freely an American subsidiary of a foreign bank could invest and how much risk it could assume. This was the point of the law: to prevent gargantuan financial firms from behaving recklessly, collapsing, and, once more, requiring a taxpayer-funded bailout.

Rather than accept these limitations, Deutsche Bank reorganized itself, moving its commercial banking subsidiary out of the holding company for its American operations, which also contained its investment arm. Deutsche Bank then claimed this banking subsidiary was not subject to the new Dodd-Frank regulations. The Federal Reserve didn’t fall for this stunt. The bank eventually was forced to comply with Dodd-Frank requirements.

That was only the beginning of Deutsche Bank’s problems with Dodd-Frank. Last September, in its first enforcement action on new Dodd-Frank provisions, the Commodity Futures Trading Commission fined Deutsche Bank $2.5 million for failing to report properly on its trading of swaps, which are complex financial derivatives.

And like most big banks, Deutsche Bank lobbies heavily in Washington. Last year it spent $600,000 on a stable of lobbyists. In 2010, the year Dodd-Frank was enacted, the bank spent nearly $2.6 million on influence-peddlers in the nation’s capital.

So how might Trump, should he become president, handle the conflict of interest posed by his relationship with Deutsche Bank?

The Trump campaign did not respond to a request for comment, but previously Trump has said (without mentioning Deutsche Bank specifically) that he would avoid any conflicts of interest by installing his children at the top of the Trump business empire.

“There would be enormous tax consequences from just giving it all to the children,” Painter says. “But just merely letting his [children] run the business doesn’t solve the problem. You really have got to figure out a way to sell your interest in the business and sell off the risk.” Other wealthy presidents have tended to own assets that could easily be unwound or sold off. But for Trump, disposing of his real estate holdings would be a special challenge. “I think what you need to do is wind down or sell off the real estate portfolio, and that probably takes time,” Painter says. “It’s not like liquid securities that are easy to sell. Or he’d need to start to focus on paying off this debt.”

Selling the parts of the businesses that he has mortgaged might be particularly difficult, because some of the debt may be tied to him personally. In the past that has led to problems, even with Deutsche Bank. In 2005, Trump borrowed $640 million from Deutsche Bank and several other lenders for the construction of a Chicago hotel tower. When he failed to pay back the money on time in 2008, the banks, including Deutsche Bank, demanded he pay up the $40 million he had personally guaranteed. In response, Trump sued Deutsche Bank for $3 billion, saying the project’s financial troubles were the fault of the economic recession, essentially an act of God, and accusing the bank of undermining the project and his reputation.

Trump and Deutsche Bank patched things up, and hundreds of millions of dollars in credit subsequently flowed from the German behemoth to Trump. But with all his debt to Deutsche Bank coming due before the end of what would be Trump’s second term as president, there’s more to this relationship than what’s on the financial ledger. The American public, too, has much at stake when it’s possible that the next president will be deeply in debt to a global financial player that has been caught trying to use its influence to rig the financial system.