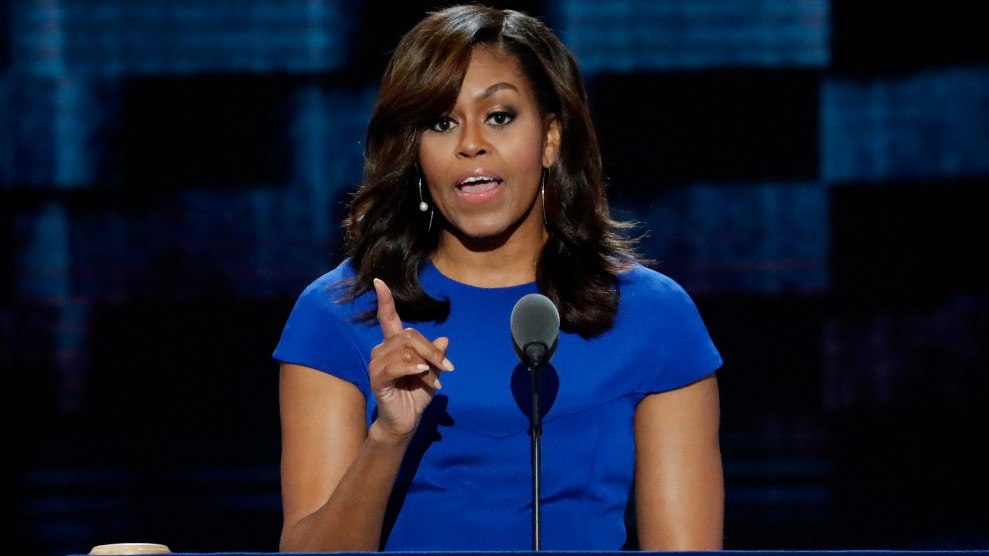 Michelle Obama delivered a powerful rebuke to Donald Trump at the first night of the Democratic National Convention in Philadelphia on Monday night, without invoking his name. Building a narrative arc around her daughters’ upbringing and maturation in the White House, she delivered a prime-time speech asking the crowd to choose a president who will be a good role model for the nation’s children.

“With every action we take, we know our kids are watching us,” she said. “This election, and every election, is about who will have the power to shape our children for the next four or eight years of their lives.”

Obama described leadership as people coming together to help their children—and without saying his name, she drew a contrast to Trump’s style of leadership. “Police officers and the protesters in Dallas who all desperately want to keep our children safe; people lined up in Orlando to give blood because it could have been their son, their daughter in that club,” she said. “Leaders like Tim Kaine who show our kids what decency and devotion look like. Leaders like Hillary Clinton, who has the guts and the grace to keep coming back and putting those cracks in that highest and hardest glass ceiling.”

That is the story of this country. The story that has brought me to this stage tonight. The story of generations of people who felt the lash of bondage, the shame of servitude, the sting of segregation but kept on hoping and striving and doing what needed to be done so that today I wake up every morning in a house that was built by slaves…And because of Hillary Clinton, my daughters, and all our sons and daughters, now take for granted that a woman can be president of the United States.

The idea of the president as a role model to children is already one that the Clinton campaign has hit on during the campaign and will likely continue as an attack on Trump through election day. (The Clinton campaign recently released an ad showing young children watching Trump swear and mock people on television, absorbing his style of insulting others.)

Obama ended her speech with a call for Democrats to roll up their sleeves and get to work to elect Clinton. “In this election, we cannot sit back and hope that everything works out for the best,” she said. “We cannot afford to be tired or frustrated and cynical. We need to get out every vote, we need to pour every last ounce of our passion and our strength and our love for this country into electing Hillary Clinton president of the United States of America. So let’s get to work.”