The hacker or hackers working under the pseudonym “Guccifer 2.0” released another set of documents Friday, this time posting a series of documents that appear to have been stolen from the internal Democratic Congressional Campaign Committee network. The latest dump includes personal contact information for dozens of members of Congress, along with memos related to a campaign in Florida’s 18th Congressional District, and other internal DCCC documents, and is titled “Guccifer 2.0 Hacked DCCC.”

The hacker(s)’ site had been dormant for nearly a month before the DCCC documents were posted Friday evening, and over the last several weeks multiple news outlets have cited anonymous US government officials as saying that they believe the hacks are not the work of a lone hacker—as the hacker claimed in interviews with Vice News’ Motherboard and Mother Jones, among others—rather they’re the work of Russian intelligence groups or hackers working with the Russian government in an alleged effort to divide Democrats and aid Republican nominee Donald Trump.

On Wednesday, the New York Times reported that US government officials believe the hack, which was first publicly acknowledged by the Democratic National Committee on June 14, was much wider than initially thought, and could have targeted several Democratic political organizations along with the private email accounts of more than 100 Democratic Party officials and other groups.

Shortly after the documents were released Friday, Guccifer 2.0 answered a series of questions for Mother Jones via Twitter direct messaging. Here’s our semi-casual exchange: 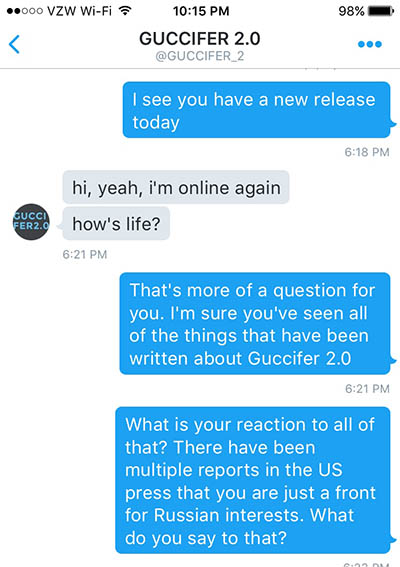 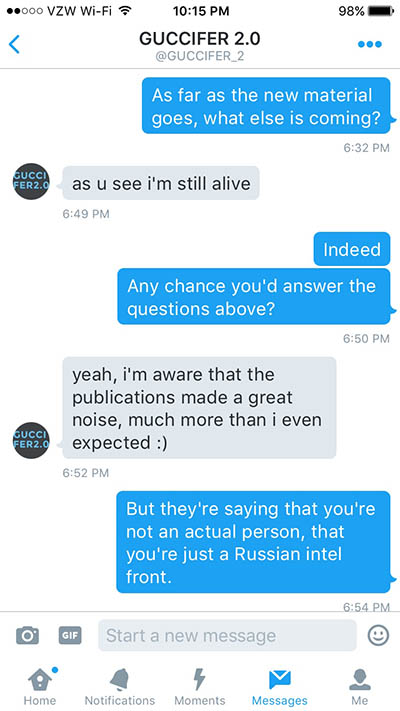 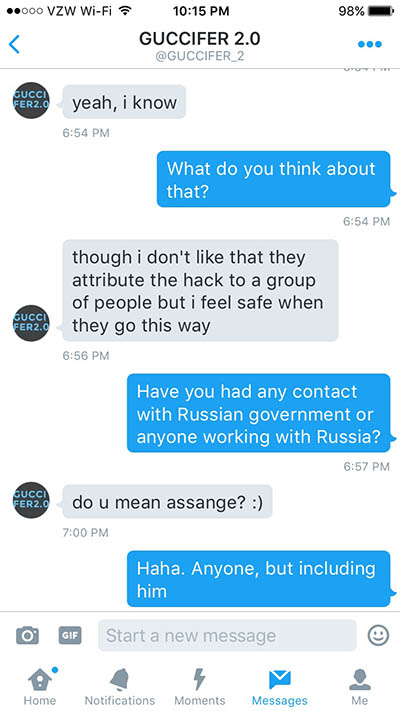 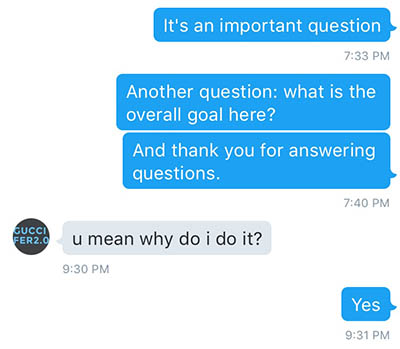 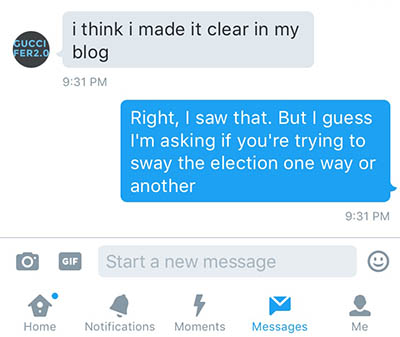 At that point, the hacker(s) stopped communicating with me.

The initial release of hacked documents from the DNC, and the subsequent release of nearly 20,000 DNC emails and thousands of attachments by Wikileaks, showed signs that some Democratic Party officials did not like Bernie Sanders and discussed ways to undermine his campaign. The controversy led to the resignation of then-DNC Chairwoman Debbie Wasserman-Schultz and several other top party officials, and cast a shadow over the Democratic National Convention in Philadelphia. The DNC later publicly apologized to Sanders for “inexcusable” behavior of those officials.

The hacker(s) included a message about US elections along with the stolen documents posted Friday: “As you see the U.S. presidential elections are becoming a farce, a big political performance where the voters are far from playing the leading role. Everything is being settled behind the scenes as it was with Bernie Sanders. I wonder what happened to the true democracy, to the equal opportunities, the things we love the United States for,” the hacker(s) wrote. “The big money bags are fighting for power today. They are lying constantly and don’t keep their word. The MSM are producing tons of propaganda hiding the real stuff behind it. But I do believe that people have right to know what’s going on inside the election process in fact.”