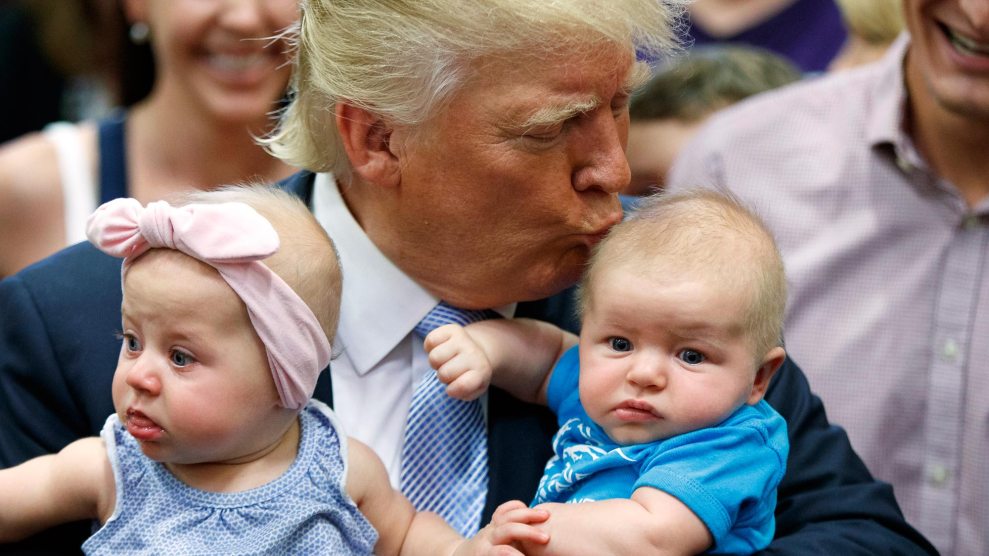 Donald Trump has worked hard to reassure conservative voters that his election-year conversion to pro-life views is genuine: He has repeatedly promised to appoint pro-life Supreme Court justices and selected a running mate, Indiana Gov. Mike Pence, famous for his anti-abortion legislative record.

But many pro-life voters are still skeptical, which might present a problem for anti-abortion Republicans running for office. Recently, Women Speak Out, the super-PAC affiliated with the anti-abortion advocacy group the Susan B. Anthony List, has launched a major initiative to help re-elect anti-abortion candidates in down-ballot races in Utah, North Carolina, Ohio, and Florida. Their aim is to bring conservative voters to the polls, in order to ensure that anti-abortion warriors don’t lose out because of Trump’s ideological flexibility on this key issue.

“Pro-life voters need an extra spark of reassurance that Trump is on their side,” Marjorie Dannenfelser, the president of SBA list, told Roll Call last week. “It could be a season where a lot of voters stay home unless we take the argument directly to them.” (SBA List did not respond to a list of questions from Mother Jones.)

Dannenfelser’s concerns about the Trump effect on conservative candidates are backed up by Republican strategists across the country: Several told Roll Call that Trump’s presence at the top of the ticket may well cause the GOP to lose its Senate majority—one strategist put the odds at 80 percent, another at 75 percent.

Dannenfelser herself has had to evolve on Trump’s abortion stance: In January, she signed on to a letter warning voters against Trump, in which pro-life women leaders said they were “disgusted” by his treatment of women.

But by May, with the primaries swiftly pointing to Trump as the presumptive GOP nominee, Dannenfelser wrote an op-ed for the conservative news site Townhall.com, laying out “the pro-life case for Trump.” She wrote that it is important to oppose Hillary Clinton, in part because her promise to fund Planned Parenthood is “the most dramatic pro-abortion position espoused by a leading political figure to date.” Her group, she wrote, “is already diligently working to engage with voters and expose Hillary Clinton’s extremism.”

One place that SBA List is focusing its efforts is Utah, where voters aren’t very enthusiastic about Trump, according to favorability polls. Rep. Mia Love has represented Utah’s 4th congressional district in Congress since 2014. She co-sponsored the 20-week abortion ban and voted for multiple pieces of anti-abortion legislation. She also sits on the select investigative panel tasked with investigating allegations of illegal fetal tissue sales by abortion providers. Love is facing Doug Owens, the same Democratic opponent that she defeated in 2014, and recent polls have her in the lead by about 19 points. But in June she was down 6 points, and she won the 2014 election by a slim margin, causing strategists to consider this race a top target for a Democratic pickup in November.

Last week, SBA List and Women Speak Out said that they have selected Love as the only House candidate they will be supporting with an independent expenditure—funds supporting work that explicitly advocates for or against a candidate—of $100,000. Their campaign will pay pro-life activists to canvass for Love, knocking on more than 35,000 doors by election day. It will also pay for digital ads and phone calls targeting pro-life voters.

In other battleground states, SBA List’s ground game will combine efforts to elect anti-abortion senators with a direct appeal to anti-abortion voters to oppose Hillary Clinton and cast ballots for Trump in November. The super-PAC plans to spend another $100,000 in Florida this month, to pay for canvassers, lapel pins, and stickers aimed at opposing Hillary Clinton and Senate candidate Patrick Murphy, who is running against Sen. Marco Rubio. Murphy has been a Democratic House representative for Florida’s 18th congressional district since 2013. He co-sponsored the Women’s Health Protection Act, a bill that would prohibit states from imposing unnecessary restrictions on abortion and voted against the 20-week abortion ban. SBA List’s team of more than 100 canvassers in Florida have knocked on more than 200,000 doors during this campaign so far.

In Ohio, the super-PAC will spend nearly $45,000 in September to oppose former Ohio governor and congressman Ted Strickland, and in North Carolina, Women Speak Out plans to spend another $100,000 in September to oppose Deborah Ross, a Democrat who served in the state’s legislature from 2003 to 2013. She’s running against incumbent Sen. Richard Burr, who’s been in the Senate since 2004 and has co-sponsored or voted for numerous anti-abortion measures, including the 20 week abortion ban, parental notification, and efforts to defund Planned Parenthood. SBA List has partnered with the North Carolina Values Coalition on this ground operation, employing more than 200 canvassers who have knocked on more than 250,000 doors. (Tami Fitzgerald, the state director of SBA List’s North Carolina team and the head of the NC Values Coalition did not respond to questions from Mother Jones.) For his part, Burr has maintained only a narrow lead over Ross throughout this election, and his campaign has long been wary of the so-called Trump effect—they’ve been working to turn out voters who would vote Burr but don’t like Trump, since April.

The SBA List’s current campaign is a far cry from the letter penned by pro-life women leaders in January: “America will only be a great nation when we have leaders of strong character who will defend both unborn children and the dignity of women,” they wrote. “We cannot trust Donald Trump to do either. Therefore we urge our fellow citizens to support an alternative candidate.”