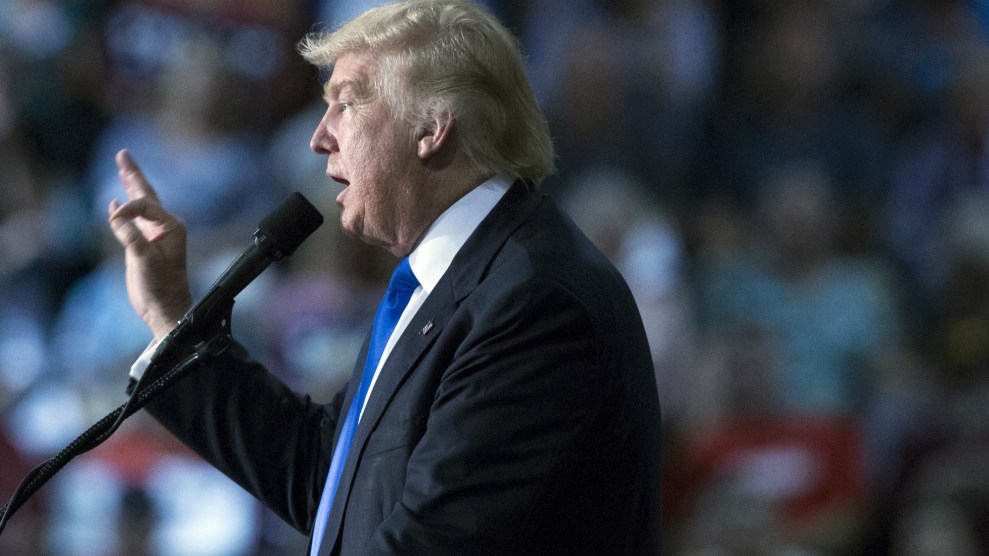 Donald Trump came under fire last week for his financial ties to overseas investors, including controversial financiers and corporations, whose interests might not align with US foreign policy. But if elected president, Trump would face a tremendous conflict of interest regarding the hundreds of millions of dollars he owes Deutsche Bank, which is now in the crosshairs of US regulators.

The US government has charged that the German banking giant misled investors into buying bad mortgage-backed securities in the run-up to the financial crisis of 2007 and 2008, and it is demanding that Deutsche Bank pay $14 billion to settle legal claims. The bank is reported to have planned for a settlement of $2 billion to $3 billion, and negotiations between it and the Department of Justice are likely to be contentious and last for months—possibly well into the next administration. Should Trump take the White House, what Deutsche Bank ends up paying for its alleged misdeeds might depend on how tough Trump’s Justice Department will be with the bank to which he owes so much money.

The conflict of interest in this possible scenario is obvious. His administration would have to render a decision greatly affecting a foreign commercial interest holding substantial leverage over Trump. A President Trump would have a strong disincentive to apply pressure on Deutsche Bank and risk souring his relationship with the institution on which he is so dependent. And would he want to tick off this lender? If Trump and his company ever were to have trouble repaying his Deutsche Bank loans, he would be at the bank’s mercy.

A President Trump would have a strong disincentive to apply pressure on Deutsche Bank and risk souring his relationship with the institution on which he is so dependent.

Deutsche Bank is one of the only big banks willing to work with Trump these days and has provided financing for his various real estate projects. Trump has borrowed as much as $364 million from Deutsche Bank since 2012, and all four of the outstanding loans will come due before 2024—the end of a potential second Trump presidential term.

Most other major banks stopped lending to his companies long ago, after a number of large banks were burned when earlier Trump projects failed. If Trump becomes president, he could find himself pulled between competing priorities: protecting his relationship with the one big bank that will do business with him or punishing a major player in the financial crash. (Though the terms of the loans are set, Trump could at some point try to renegotiate the loans, as he has done many times before. Consequently, he would have a potential interest in scoring points with the bank and enhancing its financial standing.)

The sums that Trump owes are unprecedented for a US president. Richard Painter, a University of Minnesota law professor who served as George W. Bush’s chief ethics officer, says Trump’s situation is unique. There have been presidents who possessed enormous wealth, including John F. Kennedy and Franklin D. Roosevelt, and the main concern at the time about them was whether they would use the presidency to enrich themselves further. That might be true for Trump, too. But Painter points out that in the case of the Deutsche Bank loans, Trump is not the party with the leverage because he owes the bank.

Previous presidents “had large assets and usually diversified assets,” Painter says. “They weren’t in a situation where someone could put pressure on them to do what they want. Whereas having a president who owes a lot of money to banks, particularly when it’s on negotiable terms—it puts them at the mercy of the banks, and the banks are at the mercy of regulators.”

Jessica Tillipman, a professor at George Washington’s law school specializing in corruption and ethics, says deep indebtedness is considered a major red flag when government employees are being considered for sensitive jobs. “With the president, I can’t imagine being this indebted, for the same reason you have any government employee that needs to go through a background check looked at for debt,” she says. “That is something that could be held over that individual. Any time you have something that can be held over someone, I see it as a security issue.”

There are no hard rules for how a president must resolve potential conflicts of interest, Painter and Tillipman say, but they agree Trump would need to take affirmative steps to make clear how he would prevent personal business interests from interfering with his priorities as president. (The luxury hotel he recently opened at Washington’s Old Post Office, for example, pays rent to the General Services Administration, whose leaders are presidential appointees.) Trump’s family members have alluded to setting up a “blind trust,” but that only works if the president is unaware of the assets in the trust—an impossibility in Trump’s case, given his penchant for putting his name in large letters on the property he owns.

Trump would need to take affirmative steps to make clear how he would prevent personal business interests from interfering with his priorities as president.

Trump has made vague references to turning the business over to his children, but Painter says that’s unlikely. “There would be enormous tax consequences from just giving it all to the children,” he explains. “But just merely letting his [children] run the business doesn’t solve the problem. You really have got to figure out a way to sell your interest in the business and sell off the risk.” Painter says real estate investments, such as the ones Trump has borrowed money from Deutsche Bank to develop, are not easily sold, unlike securities or more liquid forms of investment.

Since 1998, Deutsche Bank has lent Trump and his organizations approximately $2.5 billion and has made loan commitments worth another $1 billion, according to the Wall Street Journal. Currently, Trump owes Deutsche Bank more than $350 million stemming from loans on properties. Some of Trump’s most prized investments were built with money from Deutsche Bank, and three of his signature projects remain tied up in mortgages with the bank. For the Old Post Office project, Trump borrowed $170 million from Deutsche Bank. He has borrowed $125 million from the bank for two mortgages on his Trump National Doral golf course in Miami. For his Chicago skyscraper, he took out a loan in 2014 listed at $69 million on paperwork filed with the Cook County real estate office, although he said it was worth between $25 million and $50 million on the most recent personal financial disclosure form filed this past May.

Deutsche Bank has struggled in recent years, both with its finances and with regulators. In January, the bank announced that it had lost more than 6.1 billion euros in 2015. The company’s stock price has collapsed in recent months, and the bank this summer barely passed European “stress tests,” a process that evaluated its financial health. Last year, the bank agreed to pay a combined $2.5 billion in fines to US and British regulators for its role in rigging the Libor interest rate in London for years.

On Friday, the Justice Department announced the $14 billion settlement it is seeking from Deutsche Bank as punishment for the role the bank had in selling bad mortgage-backed securities. That amount is significantly higher than what the bank believes it owes, the Wall Street Journal reported, and Deutsche Bank is fighting to reduce the settlement. How tough the US government is in the upcoming negotiations could well depend on the person who next occupies the Oval Office—and his or her priorities.