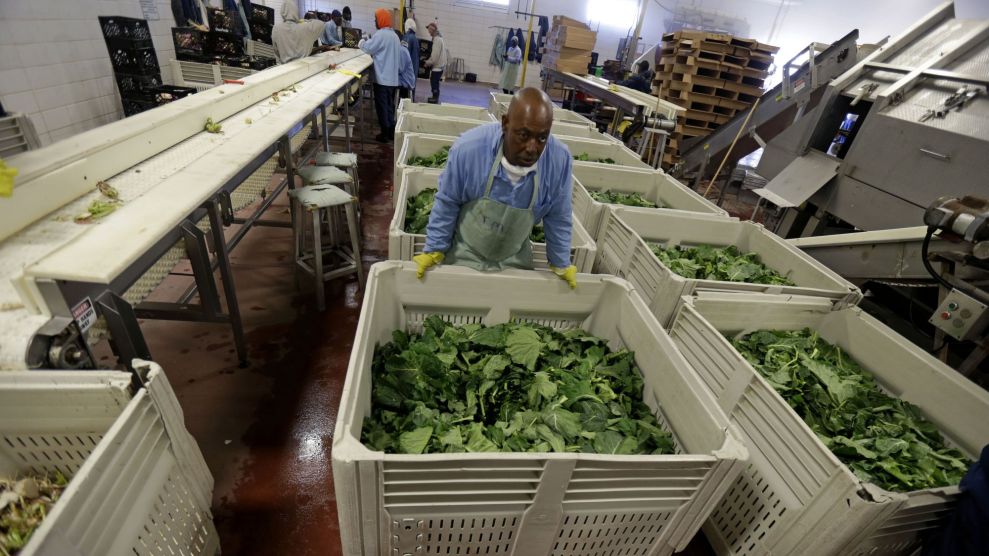 An inmate pushes a bin of greens inside a processing plant at the Louisiana State Penitentiary in Angola. Gerald Herbert/AP Photo

Following a call for a nationwide prison strike that began September 9, inmates in at least three states have organized work stoppages or staged protests in support of improving their wages and working conditions. Here’s the latest on the strike and the issues behind it:

How many prisoners are on strike?

The strike’s organizers had originally expected prisoners in 21 states to participate. So far, they say that prisoners in at least 29 prisons in 12 states have launched strikes and more than 24,000 prisoners have missed work.

• In Florida, protests erupted in four facilities last week, and a small group of inmates refused to follow orders at one facility, according to a Florida Department of Corrections spokesperson. The prisons were placed on lockdown, but resumed normal operations on September 12.

• Prisoners at the Kinross Correctional Facility in Kincheloe, Michigan, refused to report for kitchen work, forcing correctional officers to provide bagged food for lunch and breakfast the next day, says Chris Gautz, a Michigan Department of Corrections spokesman. Four hundred prisoners marched peacefully in the yard for several hours, but after a common room area was damaged, the facility went on lockdown, says Gautz. Around 150 prisoners who are considered strike organizers are being transferred to other prisons in the state.

• In Atmore, Alabama, inmates at the William C. Holman Correctional Institute facility did not report to work on September 9, but returned to work on the next day, according to the Alabama Department of Corrections.

• In Alabama, inmates who are part of the Free Alabama Movement, an organization that helped launch the strike, released a “freedom bill” that called for the abolishment of free labor from prisoners.

The strike’s organizers and supporters on the outside say they are still working to confirm reports of protests as information trickles in. Prisoners on lockdown have no access to phone and visitation. So far, no prisons or correctional departments have announced changes as a result of the strike, but ongoing lockdowns “could potentially be the breaking point,” says Cole Dorsey, an organizer with the Incarcerated Workers Organizing Committee. “They can’t run the prison just with guards alone. That will be the important part.”

How does prison labor work?

The strike, billed by activists as one of the first nationally coordinated strikes among prisoners, is intended to combat prison labor conditions, or what they call “modern-day slavery.” The Thirteenth Amendment to the Constitution abolished slavery, but left an exception for people who have been convicted of crimes. This means that prisoners can legally be put to work for little to no pay.

Inmates in state and federal prisons do many different types of work. All inmates who are medically able must do mandatory jobs, such as maintenance, cleaning, and kitchen duties. Inmates may be paid for this work—usually between 12 to 40 cents an hour. But some states, including Texas, Arkansas, and Georgia, do not pay inmates at all. Eligible inmates may participate in work programs, such as the Federal Prison Industries programs (known as UNICOR) or the Prison Industry Enhancement (PIE) Certification program, which pay wages and generally teach work skills. In UNICOR programs, wages range from 23 cents to $1.15 an hour. However, only about 7 percent of eligible inmates are employed by federal prison industry programs.

Corrections officials say that prison work offers opportunities and job training. Research has shown that some work programs can be effective at reducing recidivism and helping inmates find jobs upon release. A study of inmates in four correctional facilities in Pennsylvania found that working can help inmates improve their sense of self, provide structure and routine, and give incentives to stay out of trouble. Some correctional departments, such as Florida’s, allow inmates to work towards shortening their sentences.

“[Work] provides monetary value for [prisoners], but more importantly, a lot of prisoners come to us without ever having had a job,” says Gautz. “They’re learning not only the task of the job of what they have, and they’re learning the soft skills of showing up on time, general interpersonal skills, how to take criticism, all those things they’ve never had any experience with… The goal is to find them jobs before they’re paroled.”

What are the main criticisms of prison labor?

Despite some of these benefits, inmates and their advocates say the current prison labor system has to be overhauled. Some of their criticisms include:

• All prisoners are required to work: As long as prisoners are medically able, they must work, notes the Federal Bureau of Prisons. Various welcome manuals for prisoners also similarly state that inmates must work. (“Work is a necessary part of your daily life while in prison,” notes a handbook for prisoners in Georgia, which does not pay its inmates.) In Texas, inmates who refuse to work, lose their privileges and are confined to their cells for 24 hours a day.

• There’s not really a legal way for prisoners to ask for better wages or work conditions: Though prisoners aren’t necessarily excluded from laws such as the Fair Labor Standards Act, which establishes the country’s minimum wage, they’re not necessarily covered by it either. That’s because courts generally do not consider prisoners to be employees. As a result, previous cases where prisoners have sued for minimum wage have failed. And as an investigation by the American Prospect notes, labor unions are reluctant to represent prison workers, because prison labor produces goods that competes with other industries.

• Prisoners’ low wages are subject to taxes and deductions: In the PIE program, inmates are supposed to be paid prevailing wages. But up to 80 percent of inmates’ wages may go to taxes and deductions, including deductions for victim’s compensation funds, restitution to victims, and child support. Additionally, if an inmate wants to take part in a work-release program, some states deduct a percentage of his wages to cover the cost of the program and other incidentals. And while prison labor helps prisons and their states save money (prison workers reportedly helped Florida taxpayers save more than $59 million in 2014), prisoners may have to pay additional fines and fees. A 2010 study by the Brennan Center for Justice found that states and counties are increasingly imposing “per diem” fees on prisoners, resulting in some inmates going into debt by the time they are released.

• There are few workplace safety standards for prisoners: In 2010, the Government Accountability Office slammed the federal prison system for purposefully hiding dangerous practices at an electronic waste recycling plant staffed by inmates. “Most people don’t think of prisoners as a vulnerable population, [with] high degrees of mental illness and social isolation,” says Paul Wright, an editor at Prison Legal News. “It’s an easy population to exploit physically, labor-wise and by every other means.”