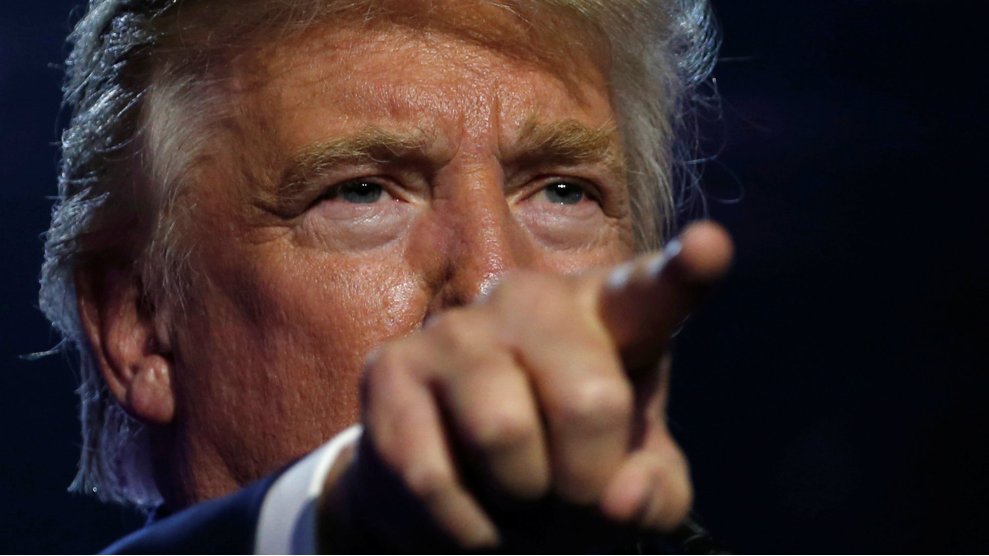 At the second presidential debate, GOP nominee Donald Trump went where no major candidate has gone: He vowed that if elected he would prosecute and imprison his opponent. This promise was a pure act of vengeance and drew much scorn. But Trump’s supporters, who have long rallied around the “lock her up” meme, embraced his declaration. Days later, Trump expanded on his pledge: He said he would also throw Clinton’s lawyers into the hoosegow. And after the New York Times and other media published the accounts of women who said they had been groped, grabbed, and kissed against their will by Trump, the former reality television star threatened payback against his accusers and the press. Next he attacked GOP House Speaker Paul Ryan after the top Republican dared to suggest that the US electoral system worked fine while Trump was claiming it was rigged against him.

“Revenge is sweet and not fattening.” – Alfred Hitchcock

Revenge—it’s a big part of Trump’s life. Following the first presidential debate, he spent days of valuable campaign time (and hours of valuable sleep time) slamming Alicia Machado, the former Miss Universe. At other times during this contest, he could not let go of his feud with Rosie O’Donnell. He tried to smear Judge Gonzalo Curiel, the American-born federal judge hearing a fraud case against Trump University, as a “Mexican” unqualified to preside over this litigation. For days, he derided Khizr and Ghazala Khan, the parents of an Army captain killed in Iraq, after Khizr criticized him during a speech at the Democratic convention. He launched misogynistic attacks against Carly Fiorina and Megyn Kelly. Rather than attempt to unify his party after a divisive primary fight, he threatened to finance future campaigns against GOP rivals, most notably Ohio Gov. John Kasich. He encouraged violence against protesters at his rallies. And there were the mean and nasty nicknames: Lyin’ Ted, Little Marco. Why all the insults, bullying, and grudge matches? There is a reason. Trump fervently believes in retaliation. How do we know? Because he has said numerous times that he is driven by revenge and that it is a basic tool to use in business. He is obsessed with payback.

In speeches and public talks, Trump has repeatedly expressed his fondness for retribution. In 2011, he addressed the National Achievers Congress in Sydney, Australia, to explain how he had achieved his success. He noted there were a couple of lessons not taught in business school that successful people must know. At the top of the list was this piece of advice: “Get even with people. If they screw you, screw them back 10 times as hard. I really believe it.”

This “get even” bit was a key part of his shtick when Trump spoke before crowds of people about the keys to his success. In a 2012 speech, he offered a longer version of this riff:

One of the things you should do in terms of success: If somebody hits you, you’ve got to hit ’em back five times harder than they ever thought possible. You’ve got to get even. Get even. And the reason, the reason you do, is so important…The reason you do, you have to do it, because if they do that to you, you have to leave a telltale sign that they just can’t take advantage of you. It’s not so much for the person, which does make you feel good, to be honest with you, I’ve done it many times. But other people watch and you know they say, “Well, let’s leave Trump alone,” or “Let’s leave this one,” or “Doris, let’s leave her alone. They fight too hard.”  I say it, and it’s so important. You have to, you have to hit back. You have to hit back.

At a speech in 2007 in Toronto, Trump railed against actor Rosie O’Donnell, recalling that he had recently said, “If she stopped looking in the mirror, I think she’d stop being so depressed.” He then expanded to his deeper message: “The point is, one of the things I say later is…get even. When somebody screws you, you screw them back in spades. And I really mean it. I really mean it. You’ve gotta hit people hard. And it’s not so much for that person. It’s other people watch.” For Trump, acts of revenge are an essential way for a person to demonstrate he or she is tough.

During another 2007 speech in which Trump (of course) assailed O’Donnell—once again calling her a “pig” and a “degenerate”—he explained his first rule of business:

In an interview with Erin Burnett on CNBC, Trump reiterated this article of faith: “There are a lot of bad people out there.  And you really have to go…If you have a problem, if you have a problem with someone, you have to go after them. And it’s not necessarily to teach that person a lesson. It’s to teach all of the people that are watching a lesson. That you don’t take crap. And if you take crap, you’re just not going to do well…But you can’t take a lot of nonsense from people, you have to go after them.”

In an undated video, a younger Donald Trump expressed the same sentiment: “I have some very very good friends and I guess I have some very good enemies. And I like it that way, somehow, and I really believe in trashing your enemies.”

Trump summed up this lifelong philosophy in a 2013 tweet: “‘Always get even. When you are in business, you need to get even with people who screw you.’ – Think Big.” The following year he tweeted this quote: “‘Revenge is sweet and not fattening.’ – Alfred Hitchcock.”

“Always get even. When you are in business, you need to get even with people who screw you.” – Think Big

For decades, Trump has been an advocate of revenge. And now his revenge fantasies are running wild on a grand stage. Clinton assails him? He will pronounce her a criminal (and in league with a global conspiracy involving international bankers) and throw her into the slammer. Iranian sailors make rude gestures at US vessels? He will shoot them “out of the water.” His favorite form of revenge is escalation—upping the ante, screwing ’em more than they screwed you. And he clearly has been taking his own advice during this presidential race. These days, Trump is lashing out at his antagonists and the media. At this point—with Trump falling in the polls—it does not seems like a strategy for success. But given how revenge seems to be embedded in his DNA, Trump may not be able to help himself. Revenge as an ubertactic might work for him in business, but constantly behaving vengefully is hardly a positive attribute for a presidential candidate or a commander in chief. One can only imagine how Trump’s profound desire for vengeance will play out, should he find himself a big loser on Election Day.