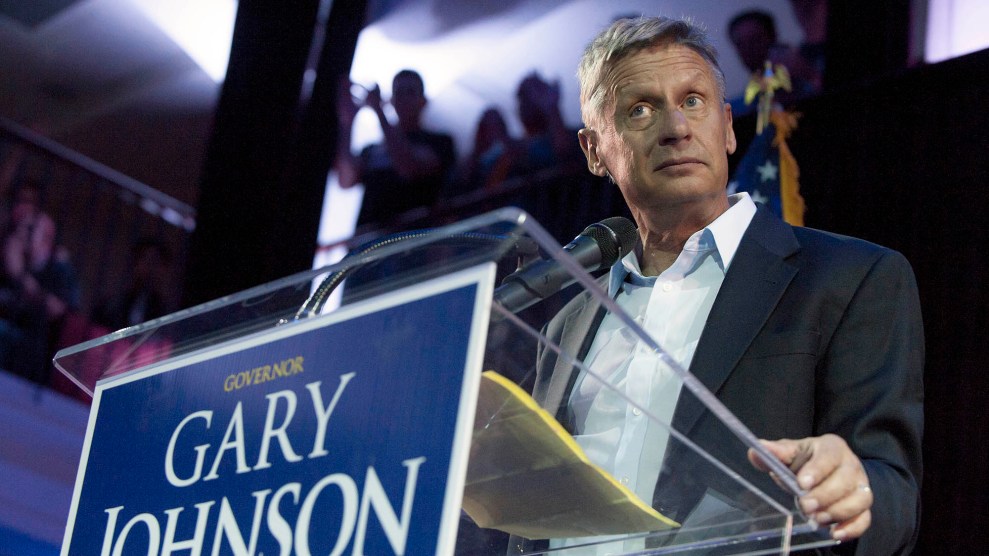 Democrats have won the majority of young voters in all recent presidential elections, and this one is shaping up to be no exception. But although Hillary Clinton leads among millennials, Libertarian Party candidate Gary Johnson has proven surprisingly popular among young voters this year, with polls show him winning as much as 29 percent of millennial support. Some of those voters—it’s unclear how many—are disaffected Bernie Sanders fans who are still wary of Clinton. Johnson and Sanders have a similar surface-level appeal: They both play the authentic outsider trying to reform politics. But there’s a host of policy differences between the two, and their views couldn’t be more divergent on one policy popular among millennials: net neutrality.

The Federal Communications Commission has set net neutrality rules to prevent the companies that deliver broadband internet access to homes and offices from restricting or enhancing access to certain websites. Under these rules, companies like Comcast and Verizon can’t for example tell Mother Jones that they will slow down page load times for users trying to access the site or even block it altogether unless Mother Jones pays special fees to them. The FCC adopted net neutrality rules in 2015, and earlier this year a court upheld the regulations. But the next president will be able to appoint new FCC commissioners who might seek to overturn these rules, under pressure from internet service providers.

Reliable polling on net neutrality is hard to come by. Take competing headlines from the Hill last year. In January: “Poll: Voters Support Broad Concept of Net Neutrality.” A month later: “Poll Finds Skepticism on Net Neutrality.” But when the FCC opened its rule to public comment in 2014, the agency’s website crashed as it received a flood of millions of public feedback submissions, overwhelmingly tilting in favor of net neutrality. (A segment on John Oliver’s HBO show helped speed along the rush of favorable comments.) Students and other millennials have been particularly active in advocating net neutrality.

Befitting his broadly anti-government attitude, Johnson has been critical of efforts by the federal government to regulate the internet, including net neutrality. “Net neutrality sounds great on paper, but the reality is that it is the start of government control of the internet,” Johnson said in an interview in 2011. “And, of course, as with every act of intervention by the government, this specific example would have unintended consequences. It will end up with the restriction of the Internet. I’m not the guy who wants to regulate [the internet] or pass legislation that might do that.”

The “internet freedom and security” section of Johnson’s campaign website hints at opposition to net neutrality, stating, “It is no coincidence that the unprecedented innovation and entrepreneurship the Internet has allowed and the resulting improvements to our daily lives have happened largely without interference from the government.”

His campaign’s communications director, Joe Hunter, said in an email that Johnson “rejects the assumption that without government regulation the Internet would devolve into fast lanes and paid prioritization of data, as is assumed in the FCC’s 2015 Open Internet Order. He has more faith in the marketplace than that.” More faith, it seems, than many people in his strongest demographic do.