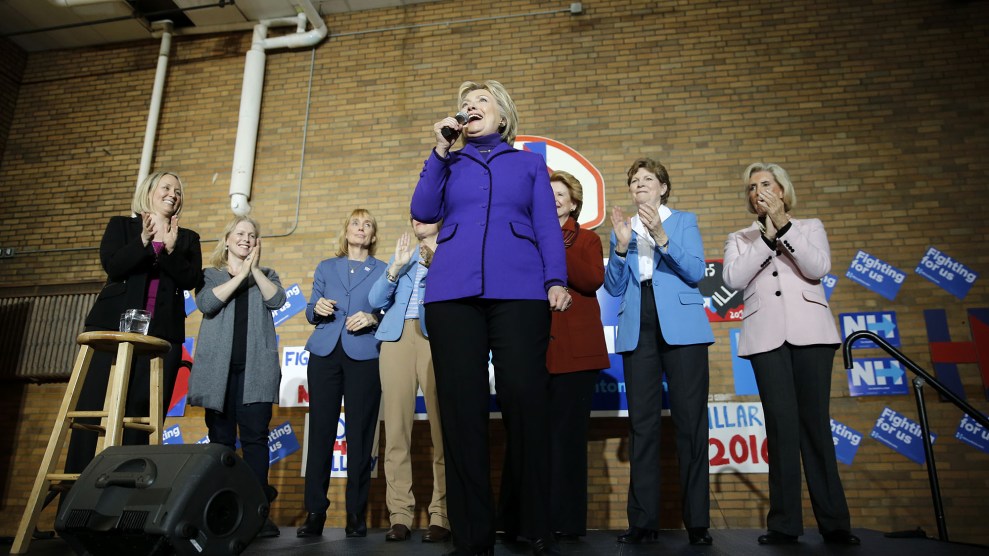 For a case study in how much an election can change in a matter of days, you could do a lot worse than the past week. A week ago, it looked probable that Hillary Clinton would win the White House, possible that Democrats would take control of the Senate, and extremely unlikely that they would flip the House of Representatives. But a lot has changed in a few tumultuous days, and Donald Trump’s disastrous week has put every chamber in play.

To recap: Last Friday, the Washington Post unearthed a 2005 video that showed Trump bragging about sexually assaulting women, prompting dozens of Republicans to rescind their endorsements of the Republican nominee. During a debate on Sunday, Trump responded to the video by haranguing his opponent with accusations of rape against Bill Clinton. House Speaker Paul Ryan announced on Monday he would no longer defend Trump and would focus his energy on maintaining the Republican congressional majority; Trump then more or less declared war on Ryan and the GOP establishment. By Thursday, press coverage of the election was dominated by the stories of women who have begun to come forward to claim that Trump assaulted them.

Over the course of those events, polls showed Clinton expanding her lead over Trump. Suddenly, the biggest questions about November 8 were no longer about the White House, but about just how long Clinton’s coattails might be if she continues to build on her lead. Has enough gone wrong for Republicans to cost them the Senate, or even the House, where they hold a substantial built-in advantage?

Unlike presidential polls, the numbers for down-ballot races are trickier to interpret and often lag behind those for the top of the ticket. Though the polls for congressional races are not yet showing a clear effect, Democratic pollster Mark Mellman says they are likely to move in Democrats’ favor. “Races that people were looking at as outside possibilities become more reasonable in a scenario where Clinton has a bigger national lead,” he says. Polling over the next week will provide a few clues as to whether Democrats’ down-ballot fortunes will indeed rise as Trump sinks.

For the House, the most important polling number to watch is the congressional “generic ballot” question, which asks voters which party’s candidate they are more likely to vote for in their district. In a truly representative House, any advantage in the generic ballot for a political party would mean a majority in the chamber. But the House isn’t quite representative, and Democrats face three hurdles to gaining a majority.

First, some districts, such as those in low-population states like Wyoming, have fewer constituents, who therefore hold more voting power. Second, Democrats’ diverse coalition is geographically concentrated in urban areas, limiting the number of congressional districts where they hold an edge and providing a systemic advantage to Republicans. Finally, there’s gerrymandering. As the party in charge in a majority of states during the last redistricting process, Republicans drew maps in many states that defy geographical logic but are very friendly to their electoral prospects.  Pennsylvania, for example, has voted for a Democrat for president in every election since 1992, but 13 of its 18 districts are represented by Republicans in the House. That is not expected to change in November, even as the state is likely to go for Clinton.

As a result, Democrats will need to lead by more than a few percentage points on the generic ballot to gain control of the House. How much more? Pollsters and forecasters differ in their projections, but answers generally fall in the range of 6 to 10 percentage points.

Kyle Kondik, managing editor of the electoral forecasting site Sabato’s Crystal Ball at the University of Virginia’s Center for Politics, says the Democrats will need a 10-point margin to put the House in play. Mellman would see margins of between 6 and 8 points as an indication that a Democratic takeover of the House is possible. Republican pollster Bill McInturff says a 7-point advantage would mean Democrats “have a shot.”

So where are the Democrats now? For months, polls have shown Democrats with a slight edge on the generic ballot but nowhere near enough to take back the House. On October 6, the day before the Trump video was released, Democrats had a 3.3-point lead in the RealClearPolitics average. But polls after the video have shown Democrats pulling ahead. A Wall Street Journal/NBC poll over the weekend gave Democrats a 6-point lead on the generic ballot, and a Reuters/Ipsos poll gave Democrats a 10-point lead. Democrats’ advantage in the RealClearPolitics average has now jumped to 6.2. The next week could determine whether Democrats’ polling gains are a blip or the beginning of a down-ballot wave.

“If you’re basically just casting a protest vote for president, it’s easy to imagine voters just not showing up at all,” says Kondik. “That’s when it starts to get very dire for Republicans in the House and Senate.”

A second variable for down-ballot candidates is turnout. The big question is whether some Republican voters who cannot bring themselves to vote for Trump will simply stay home on Election Day, hurting the chances of Republican House and Senate candidates who need them to turn out. “If you’re basically just casting a protest vote for president, it’s easy to imagine voters just not showing up at all,” says Kondik. “That’s when it starts to get very dire for Republicans in the House and Senate.”

Turnout is hard to predict on the basis of polls. Poll questions that ask about levels of enthusiasm could be one indicator: Turnout among Republicans is likely to decline if they start indicating they’re much less enthusiastic about Trump than they were about Mitt Romney in 2012. Another metric is early voting and absentee ballot returns, which are possible to track in certain states to determine whether Republicans are casting ballots in reduced numbers. In the swing state of North Carolina, for example, early data shows that Republicans are returning absentee ballots at a lower rate than they did in 2012—a bad sign for Trump as well as for the incumbent Republican senator, Richard Burr.

It’s still not clear what effect the events of the last week will have on Senate races. The conventional wisdom holds that it will be hard for most Republican Senate candidates to outperform Trump by significant margins, so the presidential polling could dictate the outcome of competitive Senate races. Republican Senate candidates in states where Trump is tanking will have to rely on ticket splitting, when people vote for different parties for president and other offices. Split-ticket voting has declined in recent elections as voters’ association with a political party has grown stronger. “We live in a country where the partisan polarization is very high and very intense,” says Mellman. “Running three, four, five points ahead of the top of the ticket is difficult.”

Still, some Republican Senate candidates seem to be immune to Trump’s collapse. Rob Portman, the incumbent Republican senator in Ohio, has polled ahead of Trump for months and likely will keep his seat even if Trump loses Ohio. (A poll released Thursday had him leading his opponent, former Gov. Ted Strickland, by 18 points.) In other races, Republicans may be dragged down because they decided late in the cycle to disavow Trump—a move that could hurt them among Trump’s most ardent supporters. The prime examples are incumbent Sen. Kelly Ayotte in New Hampshire and Senate aspirant Joe Heck in Nevada. Mellman predicts those two will “have problems”—that they could become casualties of the dilemma of being forced to choose between distancing themselves from Trump and risking the support of moderate voters by standing with him.

At the moment, however, it’s not clear that Clinton is lifting Democratic Senate candidates along with her. In fact, recent polls show Democrats struggling even in races where they were thought to hold a substantial advantage before Trump’s recent controversies, such as in Wisconsin, where Democrat Russ Feingold suddenly leads incumbent GOP Sen. Ron Johnson by only a few percentage points in the latest polls. FiveThirtyEight actually found an inverse correlation on Thursday between Clinton’s polling and that of Democratic Senate candidates in the past few weeks. But it’s too early to tell whether this is a sign of more ticket splitting this cycle than pollsters thought was possible, or whether Clinton’s rise is simply slow to manifest at the Senate level.

The question, says Kondik, is whether we are looking at a cycle like 1996, when Bill Clinton easily won reelection but Republicans kept the House and the makeup of Congress hardly budged. “I just wonder if we’re actually in that kind of election cycle,” he says. There’s a “clear trend toward less ticket splitting.”