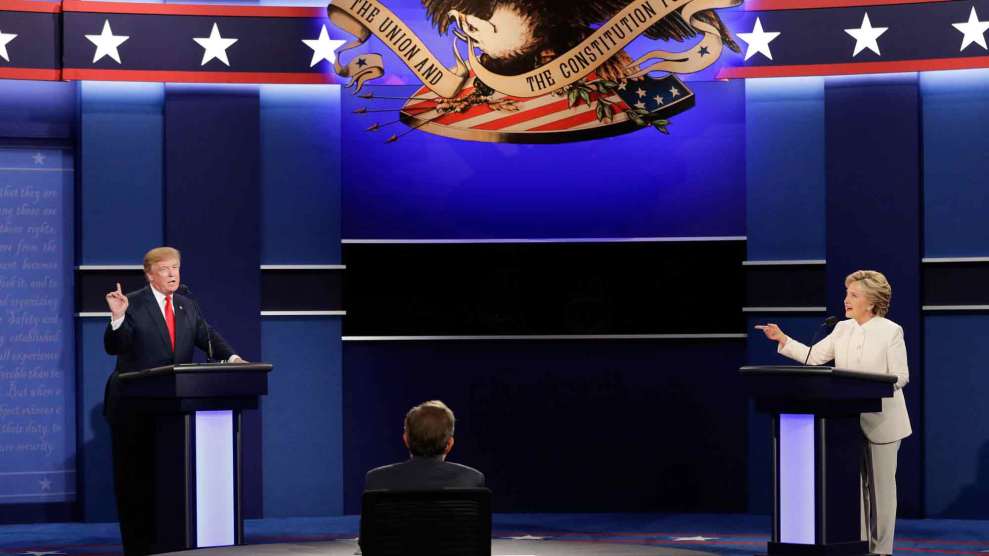 The debates between Hillary Clinton and Donald Trump are finally over. And they will go down as unprecedentedly nasty, incoherent, and bizarre political theater. The final debate, Wednesday night in Las Vegas, featured what will go down as one of the enduring legacies of Trump’s campaign: his refusal to promise to accept the election results on November 8. As moderator Chris Wallace of Fox News himself noted, the peaceful transition of power is one of the bedrock principles of American democracy.

Beyond Trump’s stunning comments about the election results, the debate featured many noteworthy—and vicious—moments. Trump hurled insults at Clinton, at one point calling her a “nasty woman.” Clinton, well prepared as always, peppered her answers with attacks on Trump’s record, such as his use of Chinese steel to build his hotel in Las Vegas. As MSNBC host Lawrence O’Donnell noted after the debate, there were “just so many things to be astounded by.”

Here are the most astounding moments of the night:

Trump says Roe v. Wade will “automatically” be overturned if he’s elected president. While the two candidates discussed their approach to the Supreme Court, Donald Trump tried to avoid clarifying his stance on abortion rights but essentially conceded that he would seek to appoint Supreme Court justices who would overturn Roe v. Wade. “Well, if that would happen, because I am pro-life and I will be appointing pro-life judges, I would think that that would go back to the individual states,” Trump said when asked if he’d aim to reverse Roe. When Wallace tried to pin him down, Trump said, “If we put another two or perhaps three justices on, that will happen. And that will happen automatically in my opinion because I am putting pro-life justices on the court.”

Clinton defends her position on late-term abortion. In a rebuttal to Trump’s assertion that late-term abortion constitutes ripping a fetus from the womb days before the pregnant woman’s due date, Clinton defended her politically thorny position that late-term abortion should be legal. “Well, that is not what happens in these cases,” Clinton said. “And using that kind of scare rhetoric is just terribly unfortunate. You should meet with some of the women that I’ve met with. Women I’ve known over the course of my life. This is one of the worst possible choices that any woman and her family has to make.”

Clinton goes after Trump for using cheap, undocumented labor. The Democratic candidate also attacked Trump for exploiting immigration laws in his own business. “Donald knows a lot about this,” she said. “He used undocumented labor to build the Trump Tower. He underpaid undocumented workers, and when they complained, he basically said what a lot of employers do: You complain, I’ll get you deported. I want to get everybody out of the shadows, get the economy working and not let employers like Donald exploit undocumented workers, which hurts them and also hurts American workers.”

Trump to Clinton: “No, you’re the puppet.” In one of the stranger moments of the debate, the candidates found themselves debating who was a puppet of a foreign dictator. When the issue of recent email hacks—which US intelligence agencies have traced to Russia, but whose origin Trump refused to concede—were raised, Trump defended himself by saying he had no association with Putin. “I don’t know Putin,” Trump said. “He said nice things about me. If we got along well, that would be good.”

Clinton didn’t quite disagree with that assessment and said that Putin would “rather have a puppet as president.”

“No, you’re the puppet,” Trump fired back.

Trump refuses to say whether he will accept the results of the election. Wallace addressed Trump’s assertion, which he repeats at rallies across the country, that the election is going to be rigged, asking Trump point-blank whether he would accept the results on November 8. Trump would not promise that. “I will tell you at the time,” Trump said. “I will keep you in suspense.”

Trump says all the assault allegations against him are Clinton’s doing. When Wallace pushed Trump on the string of women who have stepped forward since the last debate to accuse Trump of sexual assault or other unwanted contact, Trump tossed it aside and put all the blame at Clinton’s feet. “I believe, Chris, that she got these people to step forward,” he said. “If it wasn’t—they get their 10 minutes of fame. But they were all totally—it was all fiction. It was lies and it was fiction.”

Clinton: “I mean who does that? It just was astonishing.” Clinton had ample opportunities to apply this line. But in this case, Clinton said it in discussing Trump’s charitable foundation and the fact that Trump used the foundation—and other people’s donations to it—to buy a giant portrait of himself.

Trump claims the military operation to free Mosul from ISIS was done to help Clinton win. In a stemwinder about foreign policy, Trump posited that the military operation that began this week to free Mosul, Iraq’s second-largest city, from ISIS control was undertaken in order to help Clinton win the presidential election. “The only reason they did it is because she is running for the office of president,” Trump said. “She wanted to look good for the election, so they’re going in.” Clinton responded that Trump’s suggestion was another example of his conspiracy theories.

“I’m just amazed that he seems to think that the Iraqi government and our allies and everybody else launched the attack on Mosul to help me in this election,” she said. “But that’s how Donald thinks, you know. He always is looking for some conspiracy.”

Wallace calls out Trump for lying in past debates. Wallace, who said prior to the debate that he would not be fact-checking, pointedly called out Trump when asking a question about the military battle playing out for the Syrian city of Aleppo.

Trump on Clinton: “Such a nasty woman.” Near the end of the debate, Clinton was explaining that she wants to protect social security by raising payroll taxes on the wealthy. She quipped that Trump might try to get out of paying more payroll taxes—referring to widespread reporting that Trump may not have paid federal income taxes for nearly two decades by using tax loopholes. As Clinton spoke, Trump leaned into his microphone and said, “such a nasty woman.”