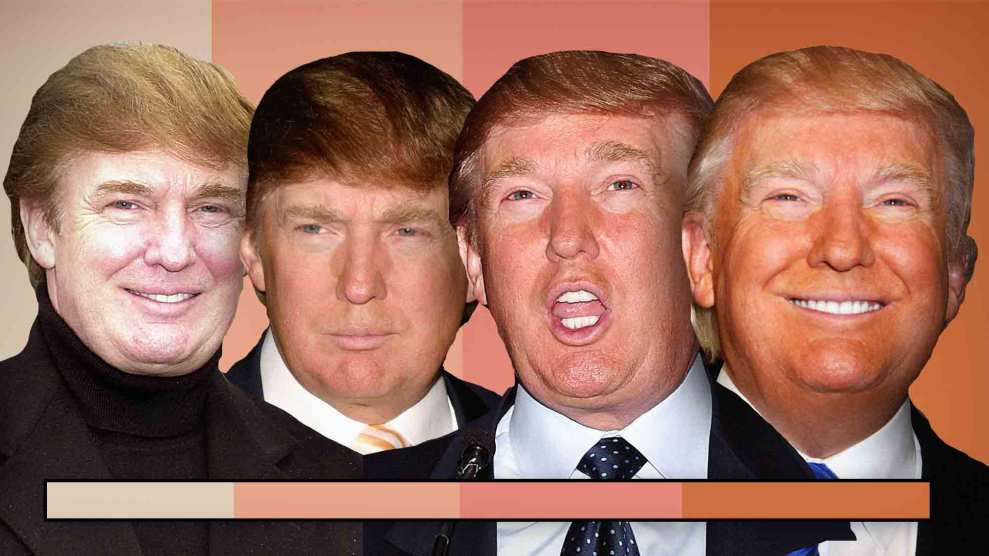 Why is Donald Trump so orange? This has been one of the mysteries of the 2016 presidential campaign. The internet is full of speculation, but the consensus is that Trump is an aficionado of bad spray tans or the tanning booth. (The white goggle lines are a dead giveaway.) He hasn’t always been this shade. Fifteen years ago, Trump’s pallor was almost normal. But something changed about 10 years ago and the internet hasn’t fully explained why. There might be a strong clue: Trump’s longtime friendship with the former CEO of a tanning company.

For nearly 20 years, Trump has had a close personal and business relationship with an Indiana businessman named Steve Hilbert, who in 2006 became CEO of New Sunshine, a maker of tanning beds, spray booths, and Kardashian-branded tanning lotions and bronzers.

Hilbert and Trump have much in common. Both men are 70, have made and lost fortunes, and have cycled through multiple marriages. They enjoy outsize lifestyles and indulge garish decorating tastes. And they share a similar orange skin tone that can result from the use—or overuse—of certain tanning products.

Hilbert made his fortune at Conseco, the insurance behemoth he founded in the late 1970s. In his glory days, he was one of the country’s highest-paid CEOs. He was famous for helicoptering to work—a commute of less than two miles. The businessman reportedly met his sixth and current wife in the early 1990s, when she jumped topless out of a cake at a party for one of his stepsons. The cake story may be apocryphal, but Tomisue Hilbert, who is the same age as Melania, was indeed a 23-year-old topless dancer and a single mother when she married Steve.

The Hilberts once lived in a three-story, 23,000 square-foot faux-French mansion dubbed Le Chateau Renaissance, which was located on a 33-acre compound outside Indianapolis that included a 15,000-square-foot “sports barn” with a full-size reproduction of the Indiana University basketball court. The mansion, once valued at $25 million, featured Trumpesque gold-plated bathroom fixtures and French crystal chandeliers. Hand-painted murals adorned a dome above the entryway, including one depicting a toga-clad Steve Hilbert as an ancient deity.

Trump and Hilbert’s first business deal together came in 1998 when they bought the iconic General Motors Building in New York City for more than $800 million. Trump put up $11 million for a 50 percent interest, and Hilbert and Conseco contributed more than $200 million. Trump put his name on the building in giant gold letters, so bright in the sun that they blinded the staffers broadcasting the CBS Morning Show from the building’s first floor. (The network had to negotiate with Trump to tone down the sign.)

Trump and Hilbert also socialized together. The Trumps attended Tomisue’s 30th birthday bash in St. Martin, where the Hilberts owned a palatial home, and stayed at Le Chateau while in Indiana for a NASCAR race and some golf. The Hilberts stayed at Trump Tower during their visits to New York and vacationed at Mar-a-Lago, Trump’s Florida resort.

Tomisue and Steve Hilbert at the opening of the Trump campaign office in Carmel, Indiana Run with permission from Current Publishing LLC. Copyright 2016. All Rights Reserved.

In 2000, Hilbert’s business empire started to collapse, thanks in large part to his disastrous decision to buy Green Tree Financial, a company that had made millions in bad loans to people buying trailer homes. Conseco, mired in $8 billion in debt, forced him out as CEO. The company eventually filed for bankruptcy in 2002. At the time, it was one of the largest corporate bankruptcies in American history, right behind those of Enron and WorldCom.

Under new leadership, Conseco tried to staunch the bleeding by selling off assets, including the GM building. Trump had the option to buy it from Conseco, but the negotiations fell apart after Trump failed to come up with the cash. Conseco forced him to sell his share for $15.6 million. Meanwhile, the company won a $62 million court judgment against Hilbert for money he owed the firm. Hilbert had borrowed $162 million from the company to buy Conseco stock, a move now illegal under federal law, and the stock became worthless when Conseco went bankrupt. Hilbert defaulted on the loans, which had been guaranteed in part with his house. Conseco foreclosed on Le Chateau in 2003.

Through it all, Trump and Hilbert remained friends. (The Hilberts attended Trump’s 2005 wedding to Melania.) And Steve Hilbert eventually began to bounce back. In 2005, he persuaded Wisconsin billionaire John Menard to let him manage some of his assets in a private equity fund. The Hilberts put in a mere $2 to the venture, while Menard, also a Trump friend, contributed $495 million, according to court records. Steve became CEO of the fund, and Tomisue, a high school dropout, was the managing partner. They earned hefty management fees from the fund.

In 2006, under the Hilberts’ leadership, the fund got into the tanning business. Not long before, Tomisue had found a lost black Lab that belonged to one of her neighbors. When she returned the dog, she discovered that its owners happened to own New Sunshine, the company that made a tanning bed the Hilberts owned. That moment of serendipity led to the Hilbert-Menard fund buying New Sunshine.

This is also around the time that Trump started to turn orange. Did the Hilberts get Trump into tanning? Does he use New Sunshine spray tans or tanning bed bronzers? (Reviewers have suggested that turning orange—a “rich shade of burnt orange,” in the words of one—can be a distinct side effect of using such products.) The Trump campaign did not respond to questions about whether Trump used New Sunshine tanning products. Questions sent by email and FedEx to Hilbert’s Indiana home went unanswered. It’s clear, though, that Trump is familiar with New Sunshine’s wares. He promoted the company’s tanning products on The Celebrity Apprentice in two episodes.

New Sunshine’s first appearance on the show came in April 2011, after Trump dumped another advertiser to make room for the company’s Australian Gold line of tanning lotions—a promotional opportunity for which New Sunshine paid between $5 million and $9 million, Hilbert acknowledged in a TV interview. “When I went to [Trump] just on the spur of the moment about The Apprentice, he did what a great friend does: He bumped someone and put Australian Gold in,” he told the station WTHR.

In the interview, Hilbert gushed about Trump, saying, “If you can have three to five great friends, when you are gone you’ve been a success and Donald is absolutely one of those individuals.” Trump returned the praise on The Celebrity Apprentice, saying, “Steve Hilbert, who in my opinion is one of the great natural entrepreneurs I’ve ever known in my life, and Tomisue, his wife, they’re just special people.”

Around the time the episode aired, Trump had generated a slew of bad press by publicly questioning whether President Barack Obama had been born in the United States. Activists launched a boycott of his show’s advertisers. But Hilbert stuck with his friend. New Sunshine issued a press release, saying, “Australian Gold would like to go on record stating that the brand is extremely pleased with the results from their April 10th, 2011 sponsorship, would certainly consider supporting Celebrity Apprentice with potential future sponsorships, and has the highest respect for Donald Trump both personally and professionally.” And it did. Australian Gold sponsored another episode in 2013.

That same year, New Sunshine underwrote yet a third installment of Celebrity Apprentice, this one featuring none other than Trump’s wife, Melania. In 2011, Hilbert had recruited Melania as the face of New Sunshine’s new high-end skin care line—her caviar-based anti-aging creams and lotions. The company agreed to pay her $1 million upfront and to provide many lucrative perks. As part of the deal, Hilbert arranged to receive $50,000-a-year worth of free products for himself. The agreement with Melania became an issue in 2013, when Menard ousted Hilbert from their private equity fund and from the management of New Sunshine, after alleging in court that Hilbert had caused the fund to lose more than $250 million. Menard canceled Melania’s contract and went to court to argue that the deal was so one-sided—and so favorable to Hilbert personally thanks to all the free stuff—that it constituted “corporate waste.”

Menard’s lawyers were suspicious of Hilbert’s relationship with Trump. According to court records, they believed the licensing deal Hilbert brokered with Melania was not made with the fund’s financial interests at heart but rather was intended to further the interests of the Trumps and Hilberts. The lawyers also questioned another Trump-Hilbert deal, one that occurred right in the middle of litigation over Melania’s skin care contract.

The Hilberts’ finances were a mess. In June 2013, the private equity management company they created to manage Menard’s money filed for bankruptcy, and they had been trying unsuccessfully for three years to sell their villa on the Caribbean island of St. Martin, which had been on the market for nearly $20 million. While Menard’s lawyers were in the middle of deposing the Hilberts, Melania, and other players involved in the deal, Hilbert asked Trump if he would buy it, and he did. The sale and its timing raised eyebrows among Menard’s lawyers, who tried to investigate the deal further to see whether it might have improperly influenced testimony in the case. But an Indiana federal judge blocked them from deposing Trump or further investigating Hilbert’s relationship with Trump. The litigation over Melania’s contract ended up in private arbitration in New York and was settled confidentially.

Hilbert has remained a faithful Trump supporter, and their friendship has endured, along with their tans. Last year, Hilbert bought a small insurance company and looked to be starting over again. Trump took time off from the campaign trail to call and congratulate him on the purchase. Hilbert and his wife saw Trump at a campaign fundraiser in Indiana in July, and Tomisue Hilbert donated $2,700 to Trump’s campaign. Hilbert has been a regular Trump cheerleader in the media. In April, he told a local Indiana paper that Trump was a “class act” who had been “the greatest operating partner” he’d ever had. “He’s what this country needs. I don’t care if he is in New York, he has Indiana values.”