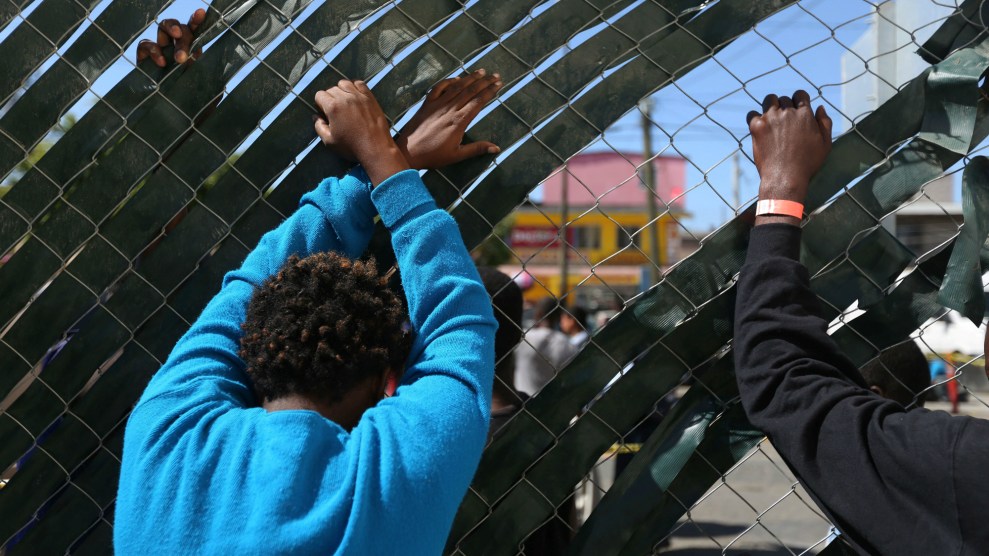 Haitian migrants stand outside a shelter in Tijuana, Mexico. A large number of Haitians have entered Mexico in recent months as they seek entry into the United States. Edgard Garrido/Reuters via ZUMA Press

Two days before the presidential election, Donald Trump traveled to the deeply segregated city of Minneapolis to make a final pitch to voters. He didn’t spend any time discussing Minnesota’s racial wealth gap—according to one study, the state’s financial disparity between races is the highest in the country—or the fatal police shooting of Philando Castile during a traffic stop in the state four months earlier.

Instead, he talked about Minnesota’s Somali population, larger than in any other state. “Here in Minnesota, you’ve seen first-hand the problems caused with faulty refugee vetting, with very large numbers of Somali refugees coming into your state without your knowledge, without your support or approval,” Trump said in the November 6 speech. “Some of them [are] joining ISIS and spreading their extremist views all over our country and all over the world,” he added.

A thousand miles away in New York City, the speech left Amaha Kassa worried. In 2012, Kassa founded African Communities Together, an immigrant rights group that connects African immigrants to services and advocates for immigration policies beneficial to people coming from Africa. “When our community sees a group of African immigrants being targeted in that way, then that gives cause for concern about what we are going to see from the administration,” he said of Trump’s Minnesota speech. “The fear is that [under President Trump] it is going to get worse.”

In the weeks after Trump’s stunning electoral upset, discussions of what the incoming administration could mean for immigrants have largely focused on the concerns of undocumented Latinos—an unsurprising development given the size of that population and its vocal activism in recent years. But other immigrant communities have also begun to question exactly how the Trump administration will affect their lives. And the country’s growing black immigrant population, which advocates say has borne the brunt of some of the country’s harshest immigration policies, fears that it could suffer particularly severely under Trump.

Advocates point to Trump’s call for a restoration of “law and order,” his focus on “criminal aliens,” and his proposal to make nationwide use of “stop and frisk,” the highly controversial New York practice that targeted minorities disproportionately and was eventually found ineffective and unconstitutional. (Trump has since walked back his stop-and-frisk proposal after criticism.) Immigrant groups worry that these policies could prey on black immigrants, given widespread evidence of prejudice that causes people to equate blackness with criminality and black immigrants’ existing struggles in the immigration enforcement system. Trump has also used harsh rhetoric about refugees, causing concern among groups that have fled disaster and conflict zones in Haiti and parts of Africa.

The country’s growing black immigrant population fears that it could suffer particularly severely under Trump.

Recent policy proposals to assist immigrants have focused largely on Latino groups, leaving some black immigrants to feel that their concerns aren’t being addressed by lawmakers. “People don’t look at particular communities and how they benefit within the overall immigration system,” says Francesca Menes, the policy and advocacy coordinator for the Florida Immigrant Coalition and a member of the Black Immigration Network. “When you’re black and you’re coming from a black country it is much harder for you to come into the US.”

The United States’ black immigrant population has grown considerably in recent decades. According to a report released earlier this year by the Black Alliance for Just Immigration and the New York University School of Law’s Immigrant Rights Clinic, black immigrants now account for nearly 10 percent of the nation’s black population, up from roughly 3 percent in 1980. The majority come from Africa and the Caribbean, with immigration from African countries seeing a particularly sharp increase in recent years in response to a number of humanitarian crises. While black immigrants are more likely to be in the country lawfully than some other immigrant groups, the undocumented black population is growing at a faster rate than the overall foreign-born black population. The roughly 600,000 undocumented black immigrants currently living in the United States may have cause to be especially concerned about Trump’s plans for deporting large numbers of undocumented immigrants.

“Being undocumented and black, we have the traditional issues that come with being undocumented,” says Jonathan Jayes-Green, a founder and coordinator of the UndocuBlack Network, a group that advocates for the black undocumented community. “But because we are also black we deal with the ways in which blackness is criminalized in this country.”

“We are already not in the best of places, so as we think about the next administration, our community has gone into a sort of crisis control.”

The Black Alliance for Just Immigration report found that black immigrants, like the black population overall, were more likely to have criminal convictions, and that as a result they were more likely than other immigrant groups to be detained by immigration officials and to be deported due to a criminal record. Although less than 8 percent of the noncitizen population in the United States is black, more than 20 percent of immigrants in deportation proceedings on criminal grounds are black. The report notes that in 2013, “more than three quarters of Black immigrants [who were deported] were removed on criminal grounds in contrast to less than half of immigrants overall.”

“The voices of black immigrants were not being heard in migrant rights, even as some of the most violent aspects of migration were impacting black immigrants the most,” says Ben Ndugga-Kabuye, a research and policy associate with the Black Alliance for Just Immigration. Ndugga-Kabuye attributes much of the expansion of immigration enforcement and detention to the Illegal Immigration Reform and Immigrant Responsibility Act of 1996, a bill passed as part of the Clinton administration’s tough-on-crime agenda. “The criminal justice system became the welcome mat into the immigration system, and the issues of racial profiling in the criminal justice system are replicated in the immigration system,” he says.

Many of the issues black immigrants face in the immigration enforcement system are not new. Advocates note that the focus on immigrants with criminal records intensified during the Obama administration and could become even more of an issue once Trump takes office. While the president-elect’s exact policy plans remain unclear, he has frequently discussed his desire to deport undocumented immigrants en masse and has more recently settled on the goal of deporting as many as 3 million “criminal aliens” during his first hours in office. He has also suggested that he would give more leeway to police. During the campaign, he frequently characterized black protesters reacting to instances of police violence as anti-police.

“I think our communities were already in a state of emergency under a Democratic president,” says Jayes-Green. “We are already not in the best of places, so as we think about the next administration, our community has gone into a sort of crisis control.”