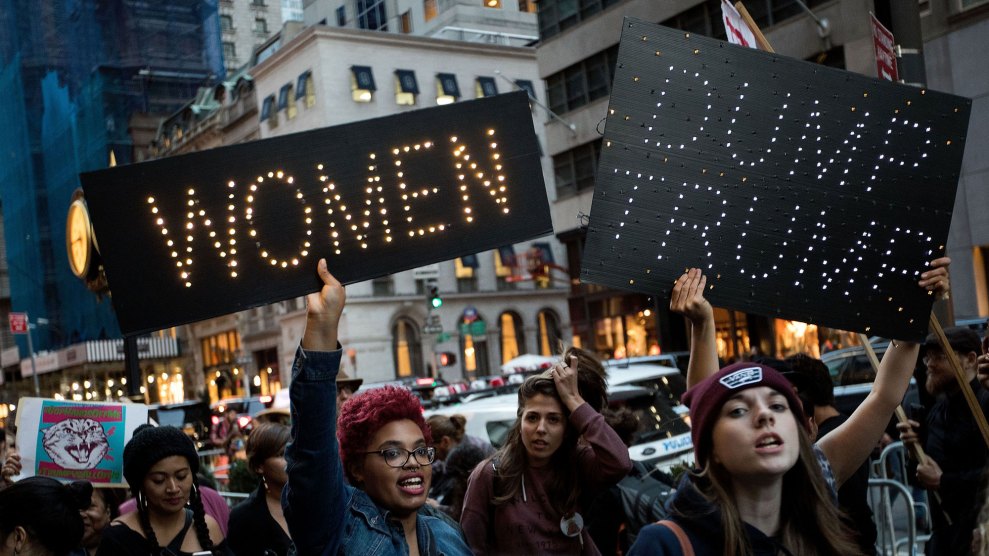 Need proof that the surge of protests following the election of President Donald Trump is having an impact on members of Congress? Just listen to the complaints of Rep. Dave Brat (R-Va.), the former economics professor who was elected in 2014 after unseating House Majority Leader Eric Cantor.

In a meeting with local conservative groups on Saturday, Brat, a fierce critic of the Affordable Care Act, lamented the vocal opposition he was facing from defenders of the health care law, and implored his supporters to write letters to the editor so they would not be drowned out. “Since Obamacare and these issues have come up, the women are in my grill wherever I go,” he said. “They come up to me and go, ‘When’s the next town hall?’ And believe me, it’s not to give positive input.”

The video was posted to the Facebook page of “7th District Town Hall,” and reported by the Richmond Times-Dispatch. The 7th District group exists for the sole purpose of persuading Brat to host a town hall meeting, at which point, presumably, he’ll face a lot more questions about the Affordable Care Act.

But the Brat pack is one small part of a nationwide progressive awakening that is both spontaneous and organized, to grind Trump’s agenda to a halt through direct action. Some 60,000 activists listened in on a January organizing call hosted by the founders of the Indivisible Guide, a new nonprofit founded by former congressional staffers that offers insider tips on how to get your elected officials to pay attention to you. (TL;DR: show up.) The organization’s thousands of local chapters have sent delegations to representatives’ and senators’ district offices on an almost daily basis since Trump took office. The Town Hall Project 2018 Google doc, meanwhile, posts detailed information on all upcoming town halls being hosted by members of Congress, for the purposes of helping activists crash more town halls.

The result is that Brat isn’t the only Republican who’s feeling the heat. Texas Rep. Kevin Brady, who represents a deep-red district north of Houston, was confronted at a January 17 meeting at a local chamber of commerce by dozens of Obamacare supporters who showed up unexpectedly to a forum that had not been publicly announced. Colorado Rep. Mike Coffman, who represents a Denver-area swing district, was caught sneaking out of a town hall filled with angry constituents in January:

While more than 100 people were waiting to meet with him, Mike Coffman sneaks out early from his own community event. #9News pic.twitter.com/NAZlXTKgQm

And activists have also targeted Democrats, hoping to apply leverage to elected officials who are still trying to figure out how best to take on the new administration. On Sunday, more than a thousand people marched to a town hall held by Rhode Island Democratic Sen. Sheldon Whitehouse, to show their disapproval for his vote to confirm CEO director Mike Pompeo. (Whitehouse eventually addressed the protesters by megaphone.) That march was organized by a coalition of left-leaning groups, including the state Working Families Party, Demand Progress, and Resist Hate Rhode Island. That same day, 200 protesters rallied outside Sen. Dianne Feinstein’s San Francisco home, after the sixth-term senator voted to confirm Trump’s first four nominees.

When a group of Indivisible activists showed up at one of Feinstein’s offices on Monday, a staffer was candid about the persistence of their efforts: “Indivisible broke my BlackBerry, and it’s close to breaking my desktop.”