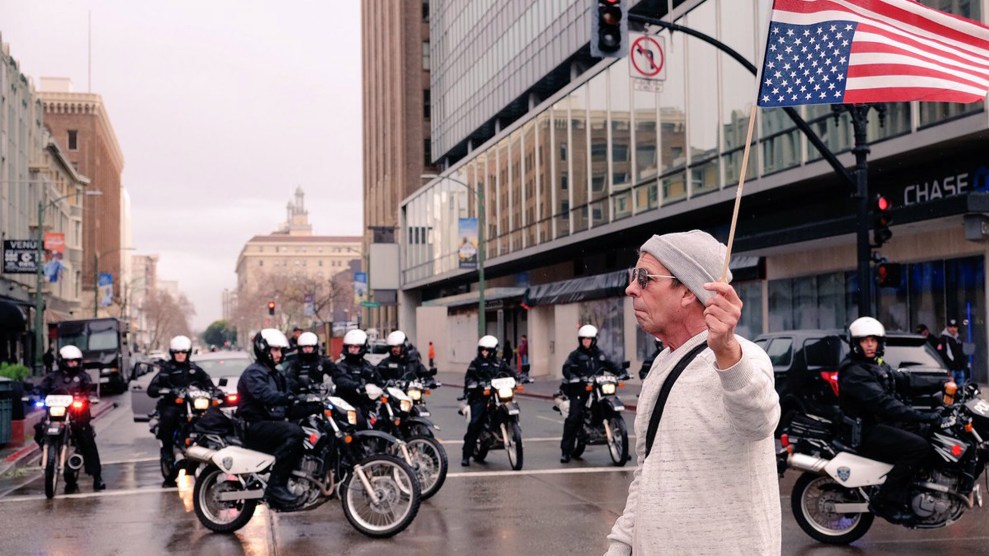 In the coming days, crowds of Donald Trump supporters will take to the streets to welcome the new president, including at Thursday’s Make America Great Again rally at the Lincoln Memorial and Friday’s inaugural parade outside the White House.

But a whole lot of people are organizing to protest Trump, including more than 1 million people who are expected to participate in women’s marches around the world.

Here are highlights from some of the protests. Come back here for more news as we update this story.

Demonstrations against Donald Trump’s presidency continued to erupt across the country.

Scenes from K-Street protests this evening in #washingtondc #inuaguration pic.twitter.com/ju2qNmKN7C

This is what happened earlier, when a Trump supporter extinguished the first fire on K Street. #InaugurationDay2017 pic.twitter.com/3KSSq3jCkV

Protesters in D.C. lit fires and clashed with police trying to disperse them. At least 95 were arrested. https://t.co/5veqb09JXO pic.twitter.com/Gqo4MhpUJP

Students in high school and on college campuses in Texas, California, and elsewhere staged walk-outs in protest.

Student protest is on the move. They’re headed from Cal Poly campus to the SLO courthouse. pic.twitter.com/QzLwaEl5CS

Hundreds gather @UCBerkeley “I will not be silenced by hate. I will spread as much love as my soul can hold” #InaugurationDay2017 pic.twitter.com/YqnD1BMH7Y

After Trump is sworn in, police clash with protesters in downtown Washington, DC.

Fire started in the middle of K Street, right in front of the WaPo HQ. pic.twitter.com/idtLIwLdTm

There seem to be hundreds, if not thousands of marchers in the streets north of the Mall right now. pic.twitter.com/LK52Fdu6Xt

Meanwhile, a crowd marches along Market Street in San Francisco.

On @MSNBC, @Maddow says she’s getting reports of “as many as 50 arrests in San Francisco” related to Trump protests

The message is important but the signs are really my favorite part right now at the #J20 #protest in #SanFrancisco #inauguration pic.twitter.com/M2c6r0t9Uf

Around the world, protesters draped banners over bridges and landmarks to speak out against Donald Trump’s policy proposals.

More Than 150 Trump Protest Banners Are Being Dropped Over Bridges Across The Worldhttps://t.co/hElNdsQUxr pic.twitter.com/UN7mNROC7h

I just filmed this here in Edinburgh. #trump https://t.co/0QskRP0zNE

The people chanting “1, 2, 3, 4, we won’t take it any more” at this anti-Trump protest in Brussels are going to have a long 4 years… pic.twitter.com/LfsQjM2Nh1