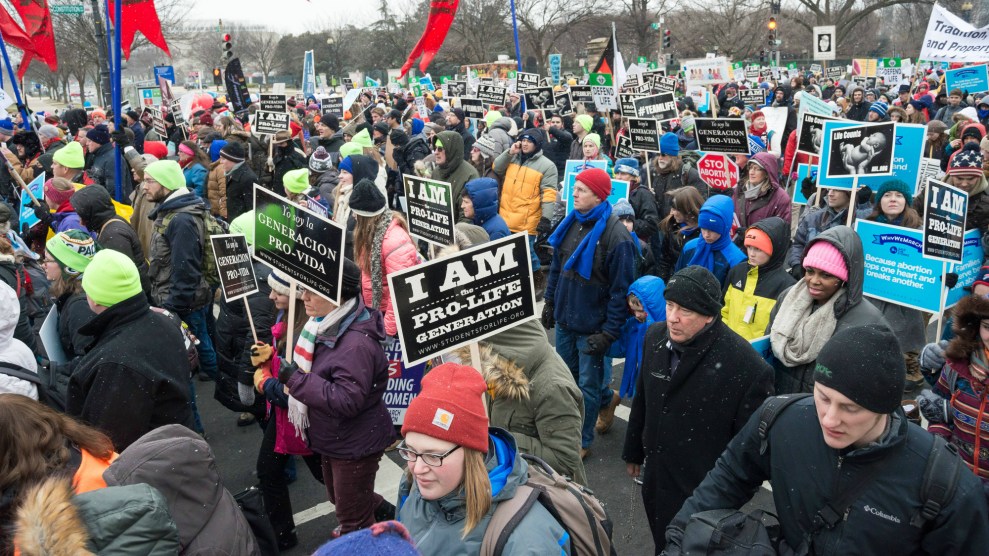 A new survey released today has sparked a debate on both sides of the abortion divide with its finding that the abortion rate has hit its lowest point since the 1970s. The survey, “Abortion Incidence and Service Availability in the United States, 2014,” was released by the Guttmacher Institute, a research and advocacy organization that supports abortion rights.

“If there are women…who want abortions but can’t get them because there aren’t any clinics that they can get to, and that’s why abortion’s going down, that’s not a good thing,” the survey’s principal researcher, Rachel Jones, told NPR. “But we think the story that’s going on in a lot of situations, in a lot of states, is that fewer women are having unintended pregnancies and in turn fewer abortions, and that is actually a good story.”

To conduct the survey, researchers collected information from abortion providers across the country, combining the self-reported numbers with state- and national-level population data to get an estimate of how many abortions were performed in each state in 2014.  The survey found that the rate of abortion in 2014 was 14.6 per 100,000 people—meaning that roughly 19 percent of all pregnancies in 2014 ended in an abortion. That marks the lowest abortion rate recorded since the Supreme Court legalized abortion with its 1973 ruling in Roe v. Wade. After a consistent decline, the total number of abortions performed in the United States dropped below 1 million for the second year in a row.

The researchers noted that the number of abortions performed in 2014 declined in all but six states—Arkansas, Kansas, Michigan, Mississippi, North Carolina, and Vermont—but understanding the reasons why this happened is more complicated. The survey’s authors acknowledge that abortion restrictions passed in a number of states could have limited abortion access, but they also note that increased access to contraception has likely prevented unintended pregnancies and limited the need for abortion.

Advocates on both sides of the abortion rights debate claimed credit for the good news in the report. In an interview with NPR, Planned Parenthood President Cecile Richards argued that the lower abortion rate suggests that contraceptive access has improved. Richards said the decline, when coupled with lower incidents of unintended pregnancy and teen pregnancy, “shows that we’re finally doing a better job of helping women get access to birth control that’s affordable and that’s high-quality.”

Anti-abortion advocates point to laws regulating clinics, or those that require women to undergo ultrasounds or view information about fetal development before an abortion, as successful deterrents and evidence of the effectiveness of restrictions on reducing abortion. “These have been game-changers, and we see the abortion rate dropping in response,” Americans United for Life spokeswoman Kristi Hamrick told NPR.

Examining the possible effect that state-level regulations on abortion providers might have had on the lower rate, the researchers found that while the overall number of available providers declined 6 percent between 2011 and 2014, “reductions were not always associated with declines in abortion incidence.” The abortion rate declined in some states like New Jersey, where the number of available clinics actually increased, while some states with a reduced numbers of clinics, like Michigan, saw a slight increase in the abortion rate. The researchers also note that 90 percent of counties in the United States did not have a clinic that provided abortions in 2014, leaving almost 40 percent of reproductive-age women without an abortion provider.

Since the survey only analyzed data from 2014, the most recent year that has information available, the effect of more recent abortion restrictions remains unseen. More than 60 new abortion restrictions were passed in 19 states in 2016, and state legislatures have already considered a wave of anti-abortion legislation, from 20-week abortion bans to bills criminalizing abortion, in the first month of 2017. At the federal level, the new Republican-led Congress has pledged to restrict abortion, introducing several abortion restrictions in the past week. House Speaker Paul Ryan has also pledged to defund Planned Parenthood, a move that would limit reproductive health access for low-income women.