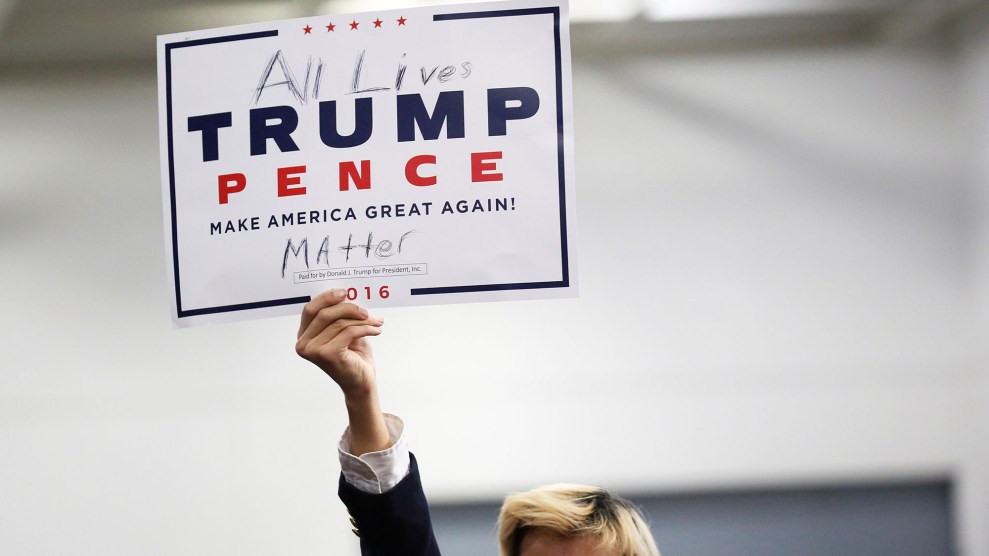 A supporter of President-elect Trump holds a sign at the USA Thank You Tour event at the Wisconsin State Fair Exposition Center in West Allis, Wisconsin. Shannon Stapleton/Reuters/ZUMA

We often think of empathy as a good thing. The ability to put ourselves in someone else’s shoes and feel their pain makes us more understanding and compassionate. In the aftermath of the divisive presidential election, there’s been a call for voters to try to empathize with people who hold opposing views.

But what if empathy actually isn’t as helpful to us as we think it is—and might even get us into trouble? That’s the case that Yale researcher and psychologist Paul Bloom makes in his latest book, Against Empathy: The Case for Rational Compassion. In this episode of Inquiring Minds, Bloom tells host Indre Viskontas that empathy can lead to poor decision-making and even get in the way of doing the right thing. “Many philosophers argue that [empathy] is an essential catalyst for good behavior,” says Bloom. “I argue that although sometimes it can lead to good behavior, more often it gets us into trouble.”

Bloom focuses on one type of empathy in particular, which he defines as emotional empathy: the ability to feel the feelings of others. Studies have shown that when we make decisions based on how we feel, we almost always end up making biased decisions, he says. Take the idea of giving to charity. Why do we tend to give more to certain victims, such as children or abandoned animals? That’s because we tend to feel more sympathy toward groups we prefer or individuals we can identify with. Conversely, we’re less likely to feel empathy toward people or groups who don’t align with our values. Empathy, says Bloom, is “what makes us focus our energy on one small child and ignore the suffering of thousands.”

Being too sensitive to someone else’s emotions can get in the way of roles where some suffering is necessary, such as those held by doctors, psychologists, or even parents, says Bloom. In situations where a child is emotionally distressed or angry, parents shouldn’t just absorb their child’s feelings; they need to be able to step back and remain calm. “Being a good parent not only involves being able to withstand the short-term suffering of your kid, it involves being able to cause the short-term suffering of your kids,” says Bloom, such as getting them to do their homework or saying they can’t go out. Being too attuned to someone’s emotions can cause you to feel emotionally depleted or burnt out. “If you’re too empathic, you can’t do any of those things, you’re so caught up in the pain and pleasure of the people around you. Too much empathy makes for a bad parent and a bad doctor and a bad friend.”

Empathy is “what makes us focus our energy on one small child and ignore the suffering of thousands.”

Bloom is all too aware of how offputting his argument sounds—he even starts his book by addressing some of the counterarguments his readers might present. But he stresses that he isn’t dismissing empathy altogether. What Bloom proposes instead is “rational compassion.” Rather than placing emotions at the center of our decisions, we should strive to be compassionate and kind to people, regardless of our feelings, he argues. Suppressing empathic emotions and focusing on more rational analysis can lead to better policy-making, allow us to focus on the long-term effects of problems such as climate change rather than our current comfort and well-being, and, ultimately, make us better people.

So do Clinton supporters need to empathize with Trump fans?

Instead, we should try to understand people on the other side of the political divide, without needing to feel the same feelings. “There’s all sorts of reasons to understand the motives of political opponents,” he says. “We have to share the same country.” And, he stresses, understanding doesn’t require moral approval. “Many Clinton supporters would say to me, ‘They don’t deserve my empathy because they’re racist and sexist and so on,'” he says. “And my response is, ‘So what?’ You should try to understand people even if their motives are awful.”