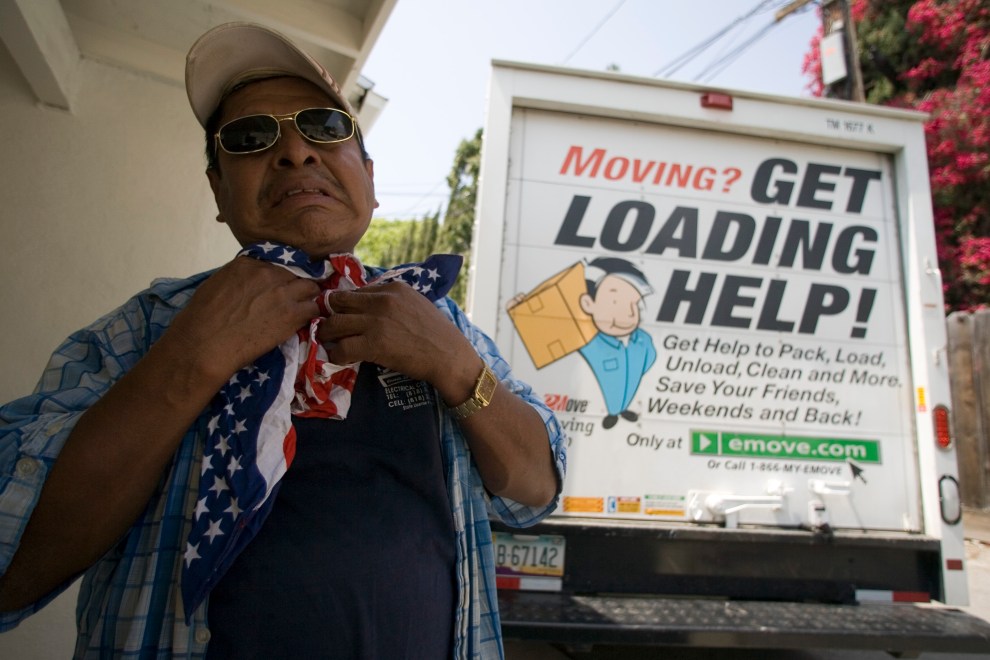 Herminio Velazquez, a day laborer, takes a break from unloading boxes at a private home in Burbank, California.AP Photo/Damian Dovarganes

Labor and immigration rights advocates are worried that the policies being rolled out by President Donald Trump will make life particularly difficult—perhaps even dangerous—for an especially vulnerable worker population: immigrant day laborers.

Trump wants to target “anybody that has any kind of ticket or infraction…That’s the danger” for day laborers.

In the executive order he signed on January 25, Trump prioritized the removal of undocumented “criminal” immigrants. Specifically, his interior enforcement plans call for the removal of undocumented immigrants who have been charged or convicted, or have even just “committed acts that constitute a chargeable criminal offense,” which could include everything from entering the country illegally to getting paid to work or driving without a license. Such a broad definition of criminality—the order also tells immigration agents to focus on those who are a “risk to public safety or national security”—has advocates for day laborers more than a little concerned.

“What President Trump wants to do is increase that kind of enforcement and target—not just certain crimes, but anybody that has any kind of criminal past, any kind of ticket or infraction,” says Victor Narro, project director at the UCLA Labor Center. “That’s the danger” for day laborers.

While reliable numbers are hard to come by, a 2006 national study of day labor estimated that 117,600 people seek this kind of work daily. The laborers often stand out on public streets near lumber yards or home improvement centers in the hope that a contractor or homeowner will hire them for help with heavy jobs such as landscaping, hauling, clearing, or moving.

This makes them highly visible to law enforcement. And while it is legal to solicit work in public in many cities, local ordinances banning loitering or jaywalking can get laborers ticketed and their names put into police databases. If undocumented immigrants are detained and fingerprinted, for whatever reason, they have more to fear. Under Secure Communities, a controversial and since shuttered Obama-era program, fingerprints were automatically sent to Immigration and Customs Enforcement, whose agents could ask local officials to hold undocumented immigrants for deportation.

And Trump isn’t just bringing back Secure Communities. After the presidential election, the Los Angeles Times reported that administration hardliners want to vastly expand expedited removal, a process in which ICE can deport people without so much as a hearing. It is currently used only within 100 miles of the border to remove people who cannot show proper documentation.

Enforcement and backlash against undocumented workers “is going to be much more violent…much more dramatic.”

Already there have been reports of anti-immigrant vigilantes photographing and harassing day laborers and, in one incident, going into a labor center in Hollywood and taking pictures of signup sheets bearing laborers’ names. “Now it’s going to be much more violent, much more explicit because of the xenophobia and very explicit racism that we see from this administration and from his supporters,” National Day Laborer Organizing Network spokesman Armando Carmona told me. “This is going to be much more dramatic.”

In defiance of the Trump administration, Los Angeles city officials have agreed to draft a law that decriminalizes the work of street vendors—many undocumented—who sell hot dogs, fruit, and other foods on streets. For years, their actions were illegal. The next push by the city’s pro-immigrant advocates is to convince officials to grant amnesty to those vendors who still face criminal charges in the hope of helping them avoid deportation. (Trump’s order also calls for cities that don’t comply with federal immigration law to lose discretionary federal funding.)

In any case, the threat of deportation and physical violence isn’t going to stop people from seeking a livelihood, says labor organizer Salvador Reza, who works with day laborers in Phoenix. “Day laborers are here to work. They need to work. In order to work, they will face the Minutemen, they’ll face the racists, they’ll face the police,” he says. “If you take Arizona as an example, we can fight it and we can win it—but it’s just massive.”

President Trump, adds Reza, “is taking on the whole nation.”