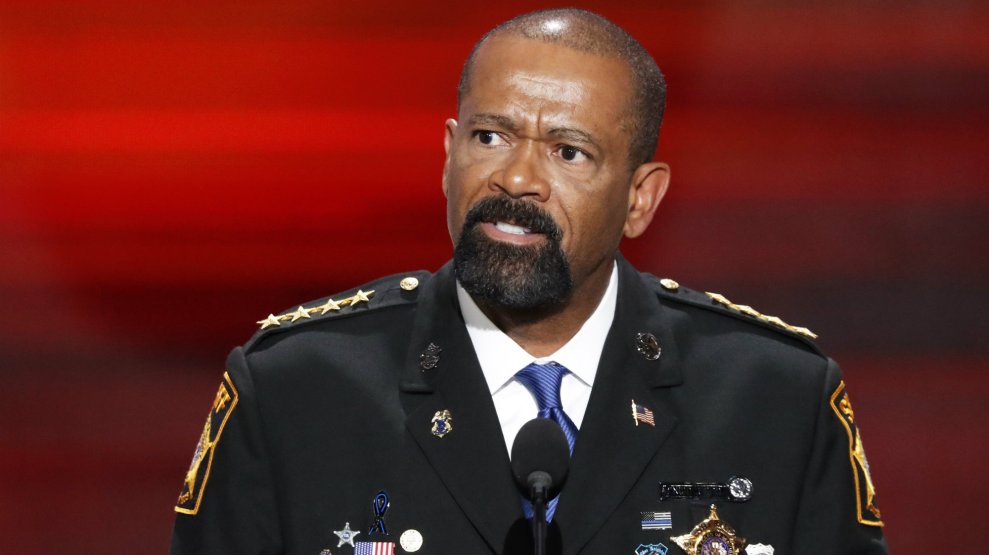 David Clarke, the controversial sheriff of Milwaukee County, Wisconsin, rose to national prominence last year as a vocal supporter of Donald Trump and a frequent guest on Fox News. Clarke traversed the country speaking to pro-gun and religious rights groups, and he endorsed Trump in a fiery pro-police (and anti-Black Lives Matter) speech at the Republican National Convention. After the election, Clarke met with the president-elect at Trump Tower, reportedly under consideration to head the Department of Homeland Security.

But things haven’t gone so smoothly for Clarke back home in Milwaukee County. Four people died last year in the county jail overseen by Clarke, and he has been sued three times since December over treatment of inmates. Clarke has faced calls for his resignation over the jail deaths and his absenteeism. And since January, he has clashed with other county leaders over immigration enforcement policy. Here’s the latest on what’s been happening on Clarke’s turf:

Clarke has faced two federal lawsuits since December, in the wake of four deaths that occurred last year in the Milwaukee County Jail. In mid-March, the family of a man who died of dehydration in April 2016 sued Clarke and the county, alleging that jail staff subjected the man to “torture” by denying him water as he pleaded for it over 10 days. County prosecutors are considering bringing felony charges against jail staff for neglect. Another lawsuit, filed last December, seeks damages for the death of a newborn in the jail last July, after jail staff ignored the infant’s mother as she went into labor and for more than six hours thereafter, according to the suit.

Clarke visited 20 states in 2016, according to financial disclosures, often to give paid speeches in which he praised Donald Trump.

A lawsuit filed earlier this month also alleges mistreatment of pregnant inmates. In that suit, a woman alleges that, during a seven-month stint at the jail in 2013, she was forcibly shackled with a “belly-chain” that tied her wrists and legs to her stomach during her hospitalization for pre-natal care, while she was in labor, and while she received treatment for post-partum depression after she gave birth. The restraints made giving birth more painful for the woman, left marks on her body, and made it more difficult for doctors—who insisted she be freed—to give her an epidural, the lawsuit says. The jail has a policy that inmates be shackled while receiving medical care that makes no exceptions for pregnancy, according to the lawsuit, which also states that more than 40 women were subjected to the same treatment.

County officials and relatives of the four people who died have called for independent investigations into the deaths, but Clarke has relinquished control of the investigation into only one of the cases. In December, the Department of Justice said it would “consider” launching a civil rights investigation into Clarke’s office for the deaths, in response to a letter sent by Wisconsin Democratic Rep. Gwen Moore. But it’s unclear what action the department might take under Attorney General Jeff Sessions, who has said his department will “pull back” on investigating police abuse. Moore plans to reach out to the DOJ about an investigation into the jail, a spokesperson for her office told Mother Jones.

Calls for Clarke to resign

Clarke has been celebrated by the likes of NRA CEO Wayne La Pierre and Fox News host Sean Hannity, but he’s less highly regarded in his overwhelmingly Democratic home county, despite running for sheriff as a Democrat in the last three election cycles. Multiple county and state officials have called in recent months for Clarke to resign his post. In December, three Democratic state lawmakers wrote a letter calling for Clarke’s resignation, citing “gross mismanagement” of the county jail. At least one county supervisor and the county executive have also called for Clarke to resign over the jail deaths.

Clarke is also facing mounting scrutiny for his repeated absences from the job last year. Clarke visited 20 states in 2016, according to financial disclosure documents he filed with the county, often to give paid speeches in which he praised Donald Trump. He spent about 60 days out of state last year, the documents show. (Before he campaigned for Trump, Clarke took a trip to Moscow in December 2015 with a delegation from the NRA, during which they met with Russian officials.)

Lady came up, told me I should take this hat off. Told her she should go get her money back for her ugly haircut. That ended THAT! Mic drop! pic.twitter.com/SfQQDMNi9V

In January, the Milwaukee Journal Sentinel published an editorial calling for the sheriff to step down, citing the jail deaths, his habit of attacking his political opponents on social media—which he does on his department’s official Facebook page—and the fact that Clarke seemed more focused on “pining for a job in the Trump administration” than on his responsibilities as county sheriff. County auditors have launched an investigation into whether Clarke abused his power following an airplane flight in January when he had six deputies and two K-9 units confront a passenger at the gate with whom Clarke had an unfriendly exchange on the plane.

Although Clarke’s approval rating plummeted to 31 percent among county voters as of February, he has scoffed at calls for his resignation and been fundraising for a 2018 re-election bid. At least one Super PAC has also begun raising money to encourage Clarke to run for US Senate next year. (Clarke has said he has no intent to run for any public office besides Milwaukee County Sheriff.) At least one person has emerged as a likely challenger to Clarke in the Democratic primary next summer.

A showdown over immigration enforcement

In early March, Clarke sent a letter to Immigration and Customs Enforcement expressing interest in enrolling his department in the controversial federal immigration enforcement program known as 287(g). Through the program, sheriff’s deputies would be trained to enforce federal immigration law in the county jail. The move put Clarke at odds with the county board of supervisors, which recently passed an “anti-discrimination” resolution that essentially sought to declare the county—home to the largest immigrant population in Wisconsin—a sanctuary county. Enrollment in the ICE program could also open the door for sheriff’s deputies to make immigration arrests in other areas where the department holds jurisdiction, including county highways, parks, and the county courthouse—a location the board’s resolution sought to declare a “sensitive location” where immigration arrests won’t be carried out by enforcement officials.

Clarke’s letter also pits him against the Milwaukee Police Department, which only shares information about a detainee’s immigration status with federal officials when the person is suspected of committing a violent offense. Wisconsin Gov. Scott Walker urged Clarke and Milwaukee Police Chief Edward Flynn to come to an agreement on how to approach federal immigration law. But the two are unlikely to find common ground: Clarke has argued that the mayors of sanctuary cities should be prosecuted under a federal statute that prohibits harboring undocumented immigrants, and he vowed to prevent Milwaukee County from becoming a “sanctuary anything” in a post on his department’s Facebook page in January.

Meanwhile, thousands of people protested at the Milwaukee County courthouse in February to denounce Trump’s immigration crackdown and Clarke’s plan to play a role in it. Others demonstrated at the state capitol in opposition to a bill—endorsed by Clarke, but expected to fail—that would fine sanctuary cities in Wisconsin up to $5,000 a day.

Earlier this month, a local immigrants’ rights group lost a key legal battle against Clarke over his department’s past compliance with requests from ICE that the department hold individuals suspected of immigration offenses. The group had sought to force Clarke to release those requests. But the court ruled that the requests were exempt from disclosure under the state’s public records law, potentially jeopardizing the public’s ability to get information about detentions made under 287(g). “Before this decision we were getting at least redacted information,” Christine Neumann-Ortiz, president of the local group Voces de la Frontera, told Mother Jones. “Now we get nothing.”

Peggy West, a board supervisor who co-sponsored the anti-discrimination resolution, cited the multiple deaths in the county jail last year as another reason to oppose Clarke’s moves against immigrants. “You probably shouldn’t want to put anyone in our jail at this point,” West said.