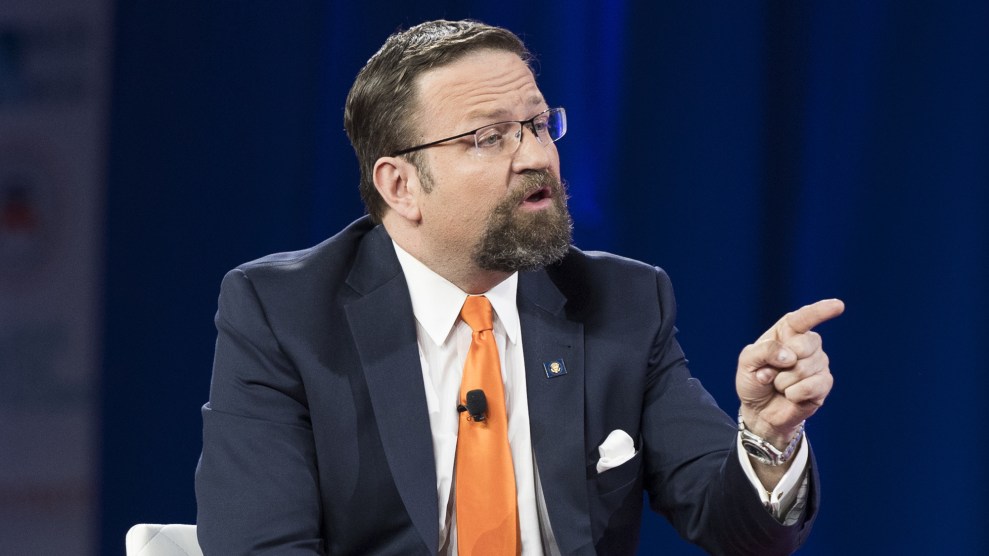 Earlier this month, National Public Radio’s Steve Inskeep asked Sebastian Gorka, the deputy assistant to Donald Trump, whether the president believes Islam is a religion. Rather than answering the question, Gorka lambasted the Morning Edition host. “It would be nice if you actually reported things accurately,” Gorka responded. “This is not a theological seminary. This is the White House. And we’re not going to get into theological debates. If the president has a certain attitude to a certain religion, that’s something you can ask him.”

Gorka went on to say that the United States is not at war with Islam: “That would be absurd.” Yet Gorka’s refusal to answer Inskeep’s simple question was telling, as was his insistence on reframing any discussion of Islam in political and ideological terms. “We’re talking about national security and the totalitarian ideologies that drive the groups that threaten America,” he said.

Gorka’s evasive comments nodded to a fringe concept that’s been floating for more than a decade: the idea that Islam is not a legitimate religion, but a dangerous political ideology. This idea has gained new currency as Trump has elevated some of its adherents to the highest levels of his administration. At a conference last summer, Lt. General Michael Flynn, who would become Trump’s initial pick for national security adviser, told an audience, “I don’t see Islam as a religion. I see it as a political ideology that…will mask itself as a religion globally, and especially in the West, especially in the United States, because it can hide behind and protect itself by what we call freedom of religion.” (Flynn resigned last month after lying about his contacts with Russia.)

Last July, Steve Bannon, the former head of Breitbart who is now the president’s chief strategist, told Mother Jones that Islam is “a political ideology.” Previously, Bannon had mocked former President George W. Bush for calling Islam “a religion of peace,” and suggested that there is an “existential war” unfolding between Islam and the West.

“They lost some credibility and respect in Republican circles—until Donald Trump came around. He gave them the biggest platform they ever could have imagined.”

Bannon’s us-versus-them rhetoric echoes the argument articulated by Samuel Huntington in his controversial 1996 book, The Clash of Civilizations and the Remaking of the World Order. In it, Huntington described a world split along “fault lines” between “hostile” rival civilizations, of which the “Islamic civilization” is the most troublesome. That narrative took hold among conservative evangelicals and the far-right fringe following the September 11 terror attacks. The recent strain of Islamophobia taps into long-standing Western stereotypes about and prejudices against Islam, says Khaled Beydoun, an associate professor at the University of Detroit Mercy School of Law who studies the intersection of race, religion, and citizenship. These orientalist views portray the Muslim world as a separate civilization, inferior to the West, and inhabited by a monolithic religious and political group. “These tropes, these stereotypes, continue to feed how Muslim identity is shaped and framed by Islamophobes today,” Beydoun says. “You see this framing adopted by Trump, and more importantly, the brain trust he has around him.”

Painting the Muslims in such broad strokes feeds into the idea that Islam is not a true religion but rather something akin to a totalitarian cult. In 2002, the Reverand Jerry Falwell declared the prophet Mohammad a “demon-possessed pedophile.” In 2007, Christian Broadcasting Network founder Pat Robertson said, “Ladies and gentlemen, we have to recognize that Islam is not a religion. It is a worldwide political movement meant on domination of the world. And it is meant to subjugate all people under Islamic law.” In 2010, former Lt. General Jerry Boykin, then the executive vice president of the Family Research Council, stated that Islam “should not be protected under the First Amendment, particularly given that those following the dictates of the Quran are under an obligation to destroy our Constitution and replace it with Sharia law.”

#Trump Choice for National Security Adviser Michael Flynn: Islam is a political ideology that hides itself behind what they call a religion. pic.twitter.com/5hqaSem7Dq

“I think you see an alignment of these very right-wing Christian elements like Boykin viewing Islam as an illegitimate religion—they view the religion as not being a bona fide faith that should be protected by the First Amendment—aligning with nonreligious figures like Michael Flynn, who wrote this book Field of Fight,” says Beydoun. In his 2016 book, Flynn wrote, “We’re in a world war against a messianic mass movement of evil people, most of them inspired by a totalitarian ideology: Radical Islam.”

Another step toward the idea that Islam is not a religion is the notion that there is no such thing as peaceful Islam. David Yerushalmi, general council of the Center for Security Policy, once wrote, “Islam was born in violence; it will die that way.” He also scoffed at Bush for his “ideological whim to build democracies among a ruthless people who believe in a murderous creed falsely labeled a ‘religion of peace.'” In 2010, Bannon, echoed these remarks, saying, “Islam is not a religion of peace. Islam is a religion of submission.” Robert Spencer, the director of the Islamophobic site Jihad Watch, wrote a book on the topic: Religion of Peace? Why Christianity Is and Islam Isn’t.

“There is this framing of Islam as less a legitimate religion, the position that Islam isn’t a religion in the way we understand Judaism or Christianity or Hinduism, that it’s more political in nature, and that Muslims must be viewed as political actors who are following the dictates of this political ideology,” Beydoun says. “And if you buy that premise, the next step is, ‘These individuals don’t deserve the same kind of protections that Jews, Hindus, Christians, and so on do.'”

Trump stated that the United States will have “absolutely no choice” but to shut down mosques because “some bad things are happening.”

In 2011, shortly after the controversy over the so-called Ground Zero mosque and the spread of a conspiracy theory that Shariah was taking over America, the Center for American Progress published a lengthy report titled “Fear Inc.,” which documented what amounted to a cottage industry of Islamophobic misinformation. Prominent players include Act for America, a “national security” group that currently boasts Flynn as a board member. Another is Frank Gaffney, the founder of the Center for Security Policy, which has pushed the unlikely notion that Islamists are secretly trying to infiltrate the American government and prominent organizations—including the National Rifle Association—through a process he calls “civilization jihad.”

“These were people who were always on Fox News, being cited on Pamela Geller’s blog, who were always on Sean Hannity, the Christian Broadcast Network, the National Review, and others,” says Faiz Shakir, the national political director of the American Civil Liberties Union and one of the authors of the report. (Pamela Geller writes a prominent anti-Muslim blog.) “You had major political groups who were then taking this and getting it into the mouths of lawmakers. At that time it was Allen West, Herman Cain, and Michele Bachmann. We went through a period where we had really fought back and marginalized some of these voices,” says Shakir. “They lost some credibility and respect in Republican circles—until Donald Trump came around. He gave them the biggest platform they ever could have imagined.”

This network also had links with what would become Trump’s inner circle. Gaffney appeared on Bannon’s radio show 34 times. Gorka, a former Breitbart editor, has regularly appeared at Center for Security Policy events and on Gaffney’s own radio program. Gaffney once defended the disgraced former FBI agent turned anti-Muslim crusader John Guandolo—who has said that mosques in the United States “do not have a First Amendment right to anything” and has helped draft anti-Muslim legislation.

Trump himself has expressed some of the key tenets of the Islamophobic right. In late 2015, Trump proposed a total ban on Muslims entering the country, justifying the idea by citing a debunked survey commissioned by Gaffney’s Center for Security Policy and conducted by Kellyanne Conway, who would become Trump’s campaign manager. The survey claimed that 51 percent of those polled believe that Muslims in America should have the choice to be governed by Shariah, and a quarter agreed that violence against Americans in the United States “can be justified as part of the global jihad.” A few weeks earlier, he stated that the United States will have “absolutely no choice” but to shut down mosques because “some bad things are happening.”

There have already been previous efforts to prevent mosques from being built using the “Islam is not a religion” argument. “Those are all real efforts,” says Shakir. “They have been on the back burner and bubbling up for a long time, and now they have people in positions of power who can effectuate these radical ideologies that they’ve long held on to.” Until Trump provides some clarity on his true views, people on both sides of the issue may assume that he is unwilling to publicly state that Islam deserves the same legal status and protections as other religions.