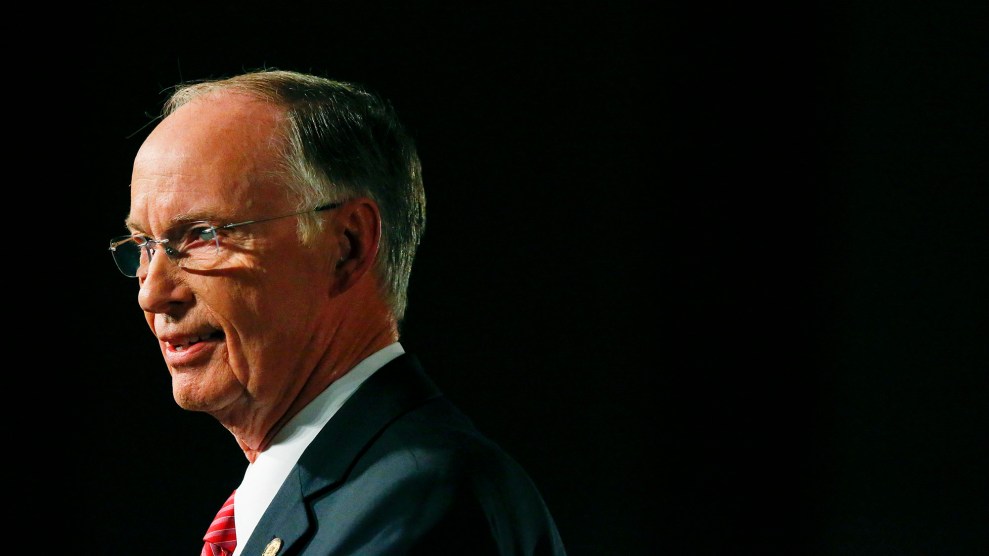 Alabama Gov. Robert Bentley speaks during the annual State of the State address at the Capitol in Montgomery on February 7, 2017.Brynn Anderson/AP, File

Alabama Gov. Robert Bentley, a Republican whose relationship with a former aide earned him the nickname “Love Gov,” resigned Monday under threat of impeachment. But Bentley’s departure won’t resolve every scandal plaguing his administration.

On Friday, the special counsel leading the impeachment investigation released a 130-page report, which found that Bentley had improperly used law enforcement officials to cover up his “inappropriate relationship” with the former aide, Rebekah Mason. “Bentley directed law enforcement to advance his personal interests and, in a process characterized by increasing obsession and paranoia, subjected career law enforcement officers to tasks intended to protect his reputation,” the report says. The findings come days after the Alabama Ethics Commission found probable cause to believe Bentley committed multiple felony violations of state ethics and campaign finance laws.

Apart from Bentley’s fate, the report shed some light on an episode that brought national scorn and a federal civil rights investigation to Alabama—an episode that also involves the state’s junior US senator, Luther Strange (R).

In 2015, the Bentley administration announced it would shutter 31 driver’s license offices. The closures—which were portrayed as a cost-saving measure—hit rural, minority counties the hardest, leaving 8 of the state’s 11 majority-African American counties without an office that issues driver’s licenses. The move was especially problematic given that Alabama requires voters to present photo identification to cast a ballot.

The closures drew widespread condemnation from civil rights activists. The NAACP filed a lawsuit, which led to an investigation by the US Department of Transportation. The department found that the closures violated the Civil Rights Act of 1964. In December 2016, the state of Alabama agreed to expand hours of operations for some offices—a partial reversal of the 2015 closures.

According to Friday’s report, former Alabama Law Enforcement Agency Director Spencer Collier told investigators that it was Mason who asked him to shutter driver’s license offices. Collier alleged that at a budget meeting in 2015, Mason proposed closing offices and asked his agency to come up with a plan for doing so. Collier also said he contacted that state attorney general’s office because he thought the proposal might violate federal law; Strange was the attorney general at the time.

“It was Collier’s understanding that Mason intended the plan to be rolled out in a way that had limited impact on Governor Bentley’s political allies,” the report states. “Collier claims he reported this to the Attorney General’s office because he was concerned about a Voting Rights Act violation.”

Ultimately, Collier came up with a plan to close offices with the smallest workloads—which hit rural and minority communities the hardest. Bentley approved the plan but, according the report, took an office in the district of a Republican state senator off the closure list.

In an email, Bobby Segall, an attorney for Mason, declined to address Mason’s involvement in the closures but added, “I will say generally there is a good bit in the report with which we do not agree.”

In February, Bentley appointed Strange to the US Senate seat vacated when Jeff Sessions (R) became US attorney general.

Beyond Bentley’s strange saga, the report raises the question of whether Strange’s office green-lighted a plan that the federal government found discriminatory. Collier first noted in the fall of 2015—amid a public backlash over the closures—that he had discussed the plan with Strange’s office. Spokespeople for Strange and the Alabama attorney general’s office did not respond to requests for comment.