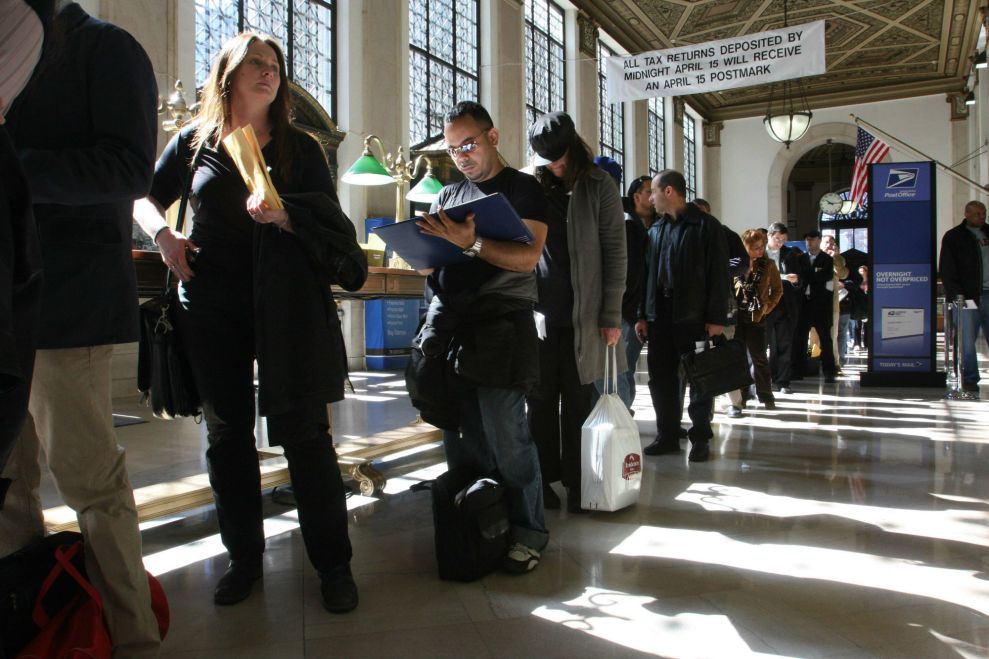 People line up to mail in their taxes in 2008.Tina Fineberg/AP

President Donald Trump isn’t close to passing his proposed tax cuts yet, but he’s already inspired one group of taxpayers to avoid the IRS this year: undocumented immigrants. National Public Radio reports that while millions of undocumented immigrants previously filed federal tax forms to prove their “good moral character” in immigration proceedings, many are now wary of leaving a paper trail amid the Trump administration’s immigration crackdown. While there is supposed to be a firewall between the Internal Revenue Service and the Department of Homeland Security, many immigrants are skeptical that it will protect them from deportation.

There is a widely held misconception that undocumented immigrants do not pay taxes. However, according to the Institute on Taxation and Economic Policy, a Washington, D.C. think tank, roughly half of undocumented immigrants pay taxes using the IRS’ Individual Taxpayer Identification Numbers (ITIN) program. The program is intended for nonimmigrant visa holders, contract workers, investors, and students. But many undocumented immigrants use it since it allows them to file taxes without obtaining a Social Security number. The ITIN program is used by 4.6 million people; in 2015, 900,000 people applied to get an ITIN. The largest numbers of ITIN users originate from Mexico, Guatemala, and India.

Undocumented immigrants are eligible for tax refunds and tax benefits such as the Child Tax Credit. This has caused conservatives to attack the ITIN program, demanding that Social Security numbers be required to receive the Child Tax Credit. Rep. Luke Messer (R-Ind.) recently proposed a bill that would require this.

While critics present the ITIN program as riddled with fraud and benefit theft, the reality is more complex. According to the IRS, in 2015 the average tax payment for ITIN users was $2,089, while the average refund for ITIN users was $2,896. Overall, ITIN users paid $23.6 million in taxes and received $9.9 million in refunds. As an IRS report points out, without the ITIN program, people without Social Security numbers could not legally file taxes, which would result in the loss of that tax income.

It is also common for undocumented immigrants to pay taxes by providing their employers with false Social Security numbers, paying for benefits they will never receive. The Social Security Administration estimates that in 2010, 1.8 million immigrants used falsified Social Security information resulting in $12 billion in tax revenue.

The anticipated drop in undocumented immigrants filing federal tax returns is part of their larger retreat from public life in the wake of Trump taking office. There are reports of immigrants refusing food assistance, medical services, and other public services, as well as refusing to report domestic violence for fear of drawing attention to their immigration status.