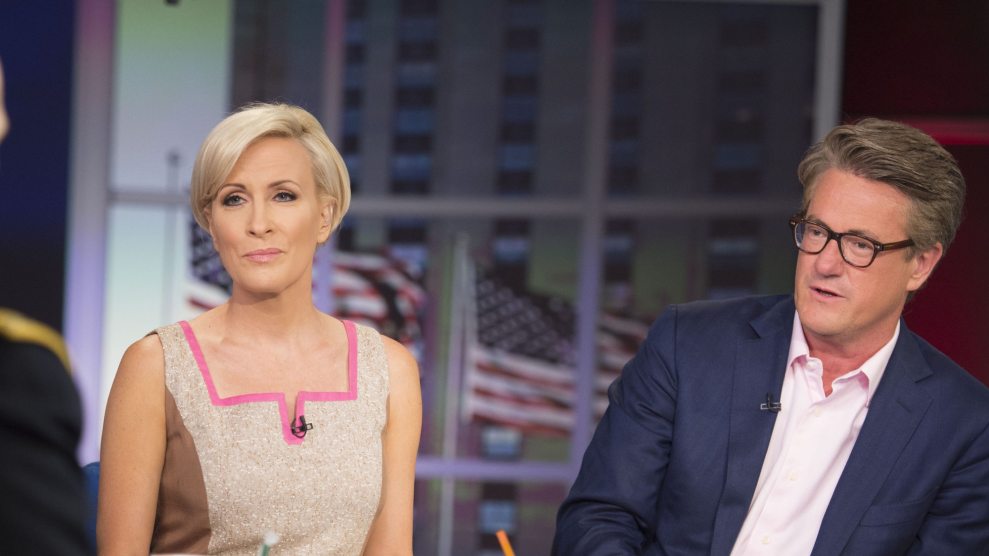 It was no shock that Donald Trump set the political media world ablaze on Thursday morning when he tweet-blasted MSNBC morning co-hosts Joe Scarborough and Mika Brzezinski as “psycho” and “crazy,” focusing his fire on “low I.Q.” Brzezinski and claiming she had been “bleeding badly” from plastic surgery during a visit to his ritzy Mar-a-Lago estate. On cue, the indignation poured forth, with Republicans wringing their hands. GOP Senator Ben Sasse tweeted, “Please just stop. This isn’t normal and it’s beneath the dignity of your office.” His colleague Lindsey Graham bemoaned, “Mr. President, your tweet was beneath the office and represents what is wrong with American politics, not the greatness of America.” House Speaker Paul Ryan remarked, “Obviously, I don’t see that as an appropriate comment.”

But Trump was not acting in an exceptional manner; he was combining two of the driving forces of his personality, both of which were well documented before he was elected: misogyny and revenge. In fact, he was just following his personal code of conduct—as Melania Trump’s response to this tweetstorm made clear.

Reacting to a question about Trump’s extreme tweets, a spokeswoman for the first lady noted, “When her husband gets attacked, he will punch back 10 times harder.” This was Trump’s wife echoing one of Trump’s favorite mottos. As Mother Jones reported in October, Trump has a long history of touting his love of revenge, and for years in speeches and public talks he has declared that a key to success is vengeance: “Get even with people. If they screw you, screw them back 10 times as hard. I really believe it.”

In fact, this was a catchphrase he deployed repeatedly when giving paid addresses on how to become rich and famous like him. In a 2007 speech, he explained his first rule of business:

Sometimes Trump said you should screw people back 10 times as much as they screwed you, sometimes he said 15 times. Melania Trump has adopted the more moderate position. But the point was always the same: Worship revenge. Trump once exclaimed, “I really believe in trashing your enemies.” And he summed up this lifelong philosophy in a 2013 tweet: “’Always get even. When you are in business, you need to get even with people who screw you.’—Think Big.” The following year, he tweeted this quote: “‘Revenge is sweet and not fattening.’—Alfred Hitchcock.”

Of course, the other constant in Trump’s life is his fondness for degrading women. His feud with actor Rosie O’Donnell is famous; he called her a “pig” and a “degenerate.” He has often derided women as “dogs.” In March 2016, I chronicled a long list of Trump’s misogyny eruptions. He once said Jennifer Lopez could not be on a list of the most beautiful women because her backside was too big. He noted that women were attracted to men who treated them badly. (“It’s sick, isn’t it?”) When radio shock jock Howard Stern asked him if he would still love Melania if she were disfigured in a horrible car accident, Trump replied, “How do the breasts look?” Other news outlets published similar lists of his boorish assertions. (See here and here.) In public, he bragged that he hired a woman just because she was “hot.” During the campaign, he claimed he had mocked women’s looks only “for the purpose of entertainment.” (One of Hillary Clinton’s best zingers of the campaign: “Donald looks at the Statue of Liberty and sees a 4….Maybe a 5, if she loses the torch and tablet and changes her hair.”)

Throughout the 2016 campaign, Trump repeatedly displayed his penchant for mixing misogyny with get-even wrath. He assailed Alicia Machado, the onetime Miss Universe whom he had previously fat-shamed. He derided Fox News host Megyn Kelly, who had dared to ask him about his history of sexist remarks, as a “bimbo” and referred to her blood as well. He attacked Carly Fiorina for her appearance. Much of his lock-her-up campaign against Clinton was laced with sexism. Oh yeah, and there was also that video of Trump bragging about committing sexual assault.

Trump certainly did not hide his misogyny or his obsession with revenge. He couldn’t. He placed both front and center during the campaign. (Some Trump associates have noted that his primary reason for running for president was revenge: to get back at President Barack Obama for having mocked him so effectively at the 2011 White House Correspondents Association Dinner.) As a candidate, Trump presided over a crusade fueled by hate. So it’s bit late for any Republican or pundit who did not declare Trump’s earlier behavior unacceptable to complain now or register surprise.

Responding to Trump’s anti-Joe-and-Mika tweets, Sen. James Lankford (R-Okla.) said, “The President’s tweets today don’t help our political or national discourse and it does not provide a positive role model for our national dialogue.” The same could be said for much of Trump’s presidential campaign, and yet Republicans supported him and thereby enabled his loathsome conduct. By backing Trump and overlooking his bigotry and profound flaws, they taught him—and the entire nation—this lesson: Misogyny and revenge indeed can work. That is, there is no need for this dog to learn any new tricks. His old ones work just fine.