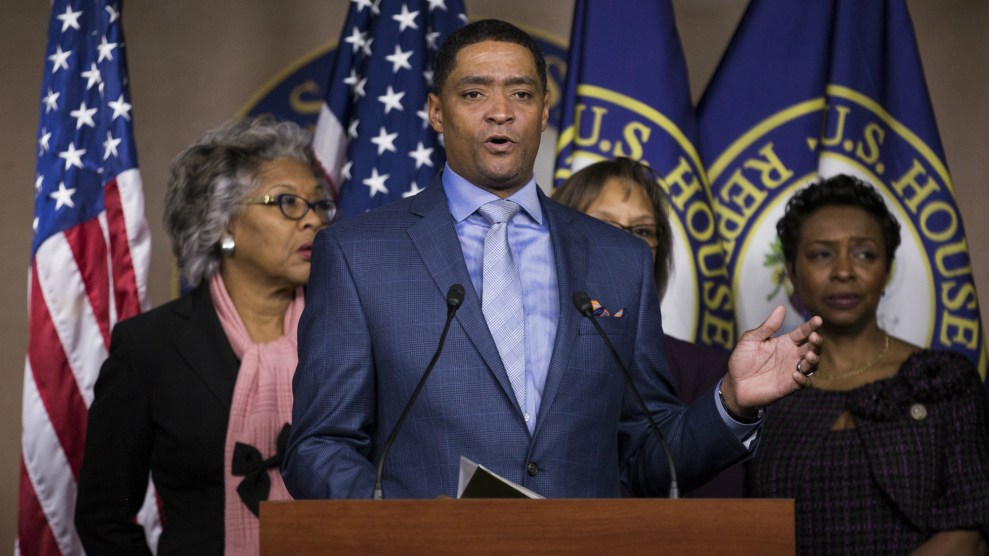 For months, the members of the Congressional Black Caucus have been some of the most ardent critics of President Donald Trump. Now, in the wake of Trump’s widely panned response to white-supremacist-fueled violence in Charlottesville, Virginia, the caucus says it will redouble its efforts to oppose the Trump administration when Congress reconvenes next month after its summer recess.

“This country is having a crisis of leadership” said the caucus’ chair, Rep. Cedric Richmond (D-La.), during a CBC leadership press call with reporters on Monday. “This president has proven time and time again that he doesn’t have the maturity or the temperament to govern in a common-sense manner.”

Richmond argued that current discussions of Confederate monuments should not distract from the fact that policies pursued in recent months by the Trump administration have had a devastating impact on people of color. Other members of the caucus leadership shared these concerns, pointing to specific issues, such as Attorney General Jeff Sessions’ push to revitalize the war on drugs, the administration’s failure to meet its promise to support historically black colleges and universities, and the president’s election integrity commission—which has fueled fears that the administration will further voter suppression efforts—as actions reflecting the administration’s lack of interest in, and even hostility toward, helping minorities.

Caucus leaders also noted that while Trump has often framed his actions on immigration as something that would benefit African Americans, ramping up immigrant arrests and slashing the current level of legal immigration are particularly devastating for black immigrants, including more than 50,000 Haitians who could see their temporary legal status expire in the next few months.

These criticisms can be seen as the continuation of the already tense relationship between Trump and the Congressional Black Caucus, whose members have been some of Trump’s harshest critics in Congress. But the timing of the press call suggests that the caucus sees recent events in Charlottesville as a critical moment. Hours before the call, the Washington Post published an op-ed by Richmond that outlined his concerns with the administration’s response to Charlottesville and the broader effect of the administration on African Americans, noting that “the black community has a lot to lose under this administration, and we have lost a lot, already.”

Monday’s call also served as the official launch of the caucus’ new #RootOutRacism campaign. The campaign, the result of an emergency all-caucus phone meeting late last week, will focus on highlighting and opposing racism “in federal policy, the White House, and on federal property,” according to a fact sheet shared with reporters. The caucus launched a related social media campaign on Tuesday, and will continue the promotion Wednesday afternoon in an effort to build momentum ahead of its members return to Washington.

The relationship between the president and the caucus has been consistently rocky but has deteriorated further since a White House meeting in March when CBC leaders gave the president a 130-page policy document outlining its vision for black America. In the months since, the caucus has continued to criticize members of the Cabinet, notably calling for the resignation of Attorney General Jeff Sessions. In June, the caucus voted to decline future meetings with Trump, arguing that the administration had failed to listen to any of the CBC’s requests and ignored attempts to meet with Cabinet officials. Last week, the CBC joined with the leadership of the Congressional Asian Pacific American Caucus, the Congressional Hispanic Caucus, and the Congressional Progressive Caucus to call for the firing of White House advisers Sebastian Gorka, Stephen Miller, and former White House Chief Strategist Steve Bannon, citing their connections to white nationalist causes. (Bannon was removed from his position last Friday.)

Asked if the CBC was actively looking into impeachment, Richmond hedged, saying that the entire 49-member caucus needed to discuss the issue before any official statements would be made. But, he added, there are legitimate concerns about Trump’s “fitness to serve.” A handful of CBC members have independently called for Trump’s impeachment, but the discussion hasn’t received support from Republicans.

During the call, caucus leadership argued that even though the caucus is a minority in Congress, there are areas where it is ready to challenge Trump. Near the top of that list is the administration’s upcoming conference for historically black colleges and universities scheduled for next month. HBCU leaders have suggested that the conference, which is reportedly being planned by White House aide Omarosa Manigault-Newman as a follow-up to a meeting that HBCU presidents had with Trump in February, be postponed in the wake of the president’s Charlottesville comments.

Members of the CBC took this argument a step further. “Not only do I think it should be postponed, it shouldn’t have been happening in the first place,” Richmond told reporters. “This White House isn’t serious about improving our HBCUs…They brought all those HBCU presidents to town, they took a picture in the Oval Office, and then they did nothing.”