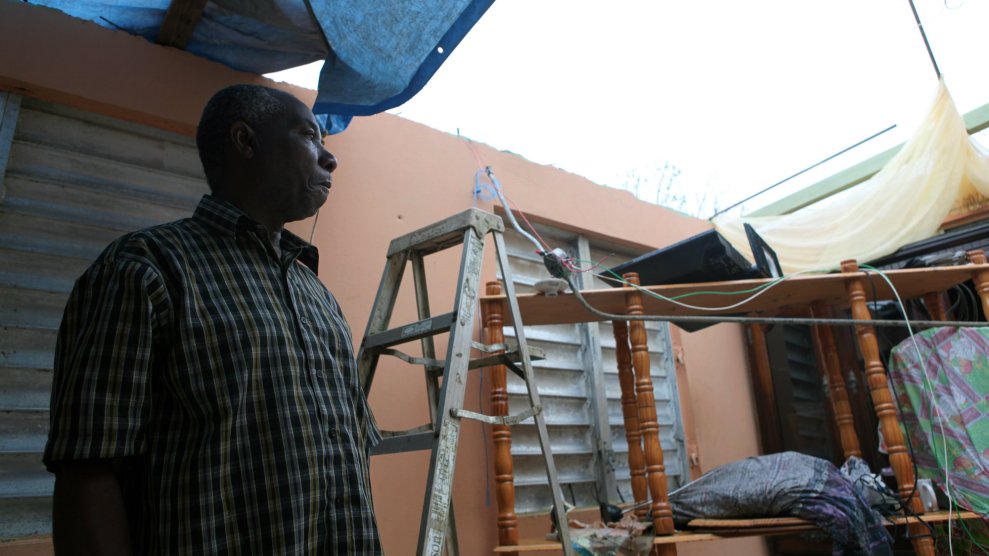 Pedro Fígaro surveys the makeshift repairs of his roof that was ripped off by Hurricane Maria.AJ Vicens/Mother Jones

Adela Fígaro wasn’t worried when high winds began to lash her home, high on a hill in Las Marias, an area in the west-central region of Puerto Rico. The Dominican Republic native, with a quick wit and a big smile, had been through other serious storms in her 30-plus years living deep in the mountains of the island, about 60 miles from San Juan, where much of the island’s coffee and fruit is grown.

The winds picked up but she remained safe in bed, even when large parts of trees flew by her window as the full force of Hurricane Maria’s 200-mile-an-hour winds reached the area.

“I’m not getting up out of my bed until the roof comes off,” she remembers thinking.

And then it did.

Nonetheless, she wasn’t scared, she recalls as we talk outside her home as still more rain begins to move into the area. Her family’s home is adjacent to their 16.5-acre property where they grow bananas, mangos, coffee, and other fruits—much of which was wiped out by the storm.

Three weeks ago today, Maria tore through Puerto Rico, inflicting one of the worst natural disasters in a generation on the island of about 3.5 million. The government counts more than 5,700 refugees—those whose homes were destroyed or have been rendered uninhabitable—and claims that cellular communications are back up to about 53 percent of the capacity the island had before the storm—although connections still drop frequently in San Juan, the island’s capital city. (If you see groups of cars pulled onto the shoulders of highways in a given spot, it’s probably because there’s a small pocket of cell service.) The government reports that more than 86 percent of grocery stores are open, but people across the island will tell you that there isn’t much food on the shelves, and they’re forced to go buy meals in the restaurants where either power has been restored or, more likely, a diesel-powered generator keeps the lights on.

While the entire island of Puerto Rico was devastated by Hurricane Maria, the residents of the more isolated central mountain region that runs across the island from east to west were particularly hard hit. And for those like Adela Fígaro and her family, their relative isolation has made it nearly impossible for them to access relief supplies, forcing them to buy what little food stock has made it to market.

Even if bountiful food supplies were accessible, many don’t have the electricity to refrigerate it. Roughly 10.6 percent of the island has had its electricity restored, the government says, but there are still giant chunks of the island that go black at night. In the central mountain areas where Fígaro lives with her husband and two grown sons, people aren’t expecting to get electricity back anytime soon. Eduardo, one of Adela’s sons, estimates it will take two years, but his mother is a bit more fatalistic.

She is unfazed by the fact that the more prosperous San Juan is getting electricity before the mountains, saying she is just “happy because at least someone” is getting it.

She scoffs at the government claims that more than half of Puerto Rico’s electricity has been restored. “To where?” she asks, as the men sitting at her bar laugh.

In the Cerrote sector of Lares, a town in the central mountains about an hour-and-a-half from San Juan on a good day, Denise Ruíz and her husband own and run a convenience store and bar called the Colmada La Nueva Parada at a junction of roads that snake through the area. She scoffs at the government claims that more than half of Puerto Rico’s electricity has been restored. “To where?” she asks, as the men sitting at her bar laugh.

“I’ve accepted that we won’t have electricity up here for at least a year,” she says, noting that she’ll just have to keep running her business on a diesel-powered generator.

But more pressing than electricity is access to clean drinking water, and in this too those in the mountains are underserved. The government says that 64 percent of island residents have had their water service restored, but in many places, that’s not the case. In Lares, some residents now have clean water, but others still rely on state or federal government distribution centers. Angela Serrano, the principal of Domingo Aptone Collazo High School in Lares, has run a refugee center out of the high school where 24 people have been living temporarily for the last three weeks. She says they have most of what they need besides water, which has to be brought in every other day from Arecibo, a city on the island’s north coast about an hour away.

At the shelter, which is inside the town’s high school’s classrooms, I talked with Johana Camacho, 38, a small woman with colorful hair, who is living in a classroom with her 18-year-old son Hector Ríos, and her 14-year-old daughter Naishaly Ríos—both of whom have special needs. The family occupies one classroom, while other rooms have been designated for women and men, separately. She says her home was partially destroyed in the storm, but that she wants to get out of the shelter and get her children back to their house but can’t because it’s been destroyed. She has been having trouble getting medications for herself and her kids, and is trying to navigate the FEMA claims process, which she calls “difficult.”

“I keep tight to my faith in God,” she tells me. “I move forward for these two. I can’t stop.”

If getting water to people at the shelter is challenging, it’s been nearly impossible in the more remote mountain communities outside of Lares. Back up in Cerrote outside of the town’s main center, Ruíz, at the Colmada La Nueva Parada, says that in her area, the local, state, and federal governments have not begun distributing water or other essentials. Area residents have gone to distribution points in other towns, which for some means navigating tight mountain roads that almost every day are getting covered in mud and other debris from ongoing landslides. Ruíz says that one day the town’s mayor did show up in a water truck with a few other men, but distributed no water and left after buying a few Cokes.

“He didn’t even ask if people up here needed water, or how we were doing,” she says.

It’s been raining hard the last few days on the island, and the weather forecast says the bad weather will continue. That’s a problem for many who lost their roofs during the storm, including the Fígaro family, who were able to find enough metal sheets to at least cover up their bedroom. They’ve secured a tarp to the top of the house above part of what was once the living room, but it hasn’t made much difference.

“This is like living in a boat with a hole in it, and we’re constantly using buckets to get the water out,” says Pedro Fígaro, Adela’s husband.

Adela says she went to talk to a FEMA representative at the town center in Las Marias, but the representative told her they have no idea when they’ll be up to survey the damage to her home, so they are doing the repairs themselves.

“I don’t expect them to come,” she says. “If they want to come help, that’s great. But if not, we’ll have to keep going.”

The family is burning burlap sacks in hopes that the smoke will keep the mosquitos away, but they’ve had only limited success. Getting to Ruíz’s store about a mile away for provisions has become more difficult with the daily rains that have made the already dangerous roads still more treacherous.

Adela still knows what is most important.

“Nothing that bad has happened here,” she says, smiling. “We’re all still alive in the end. That’s what matters.”

What else do you want to know about the crisis in Puerto Rico? Our reporters are taking your questions. Submit them here.