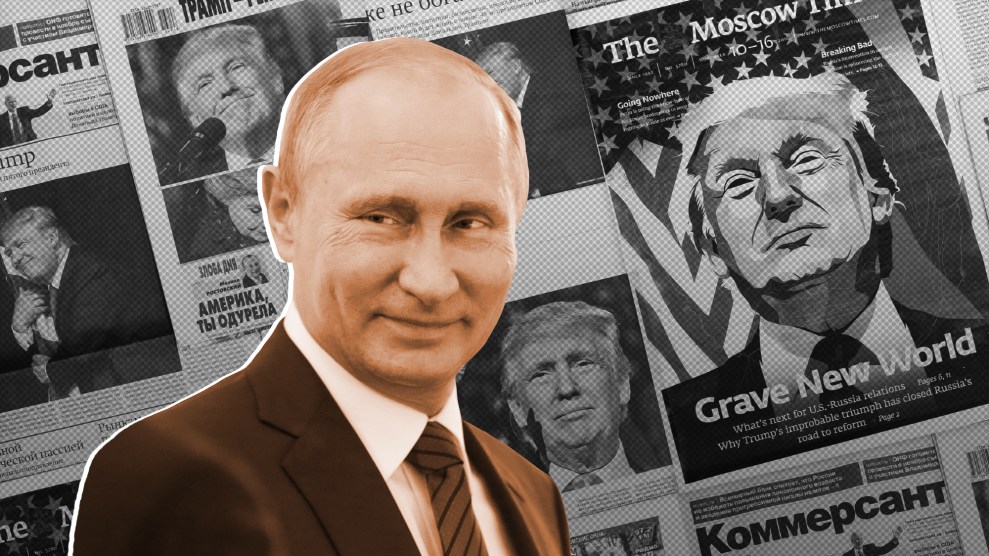 On Wednesday September 20, the Washington Post published yet another evening bombshell about the Trump-Russia investigation. The Post found that while serving as Donald Trump’s campaign chairman, Paul Manafort offered to provide regular “private briefings” on the presidential campaign to Oleg Deripaska, a Russian billionaire who is closely linked to Vladimir Putin. Manafort’s offer was a critical detail for investigators on the Trump-Russia case, the Post reported, because it pointed to possible collusion. The exchanges “created a potential opening for Russian interests at the highest level of a US presidential campaign.”

Within the next 24 hours, the Post‘s findings made news around the world—splashed across screens during evening newscasts on CNN, MSNBC, and other American networks, along with major networks in the UK, Australia, and more. “This is obviously incredibly significant,” said CNN host Erin Burnett when introducing the story on her show that night.

But in the mainstream press in Russia—TV, print, and radio outlets like Channel 1 or NTV that are fully or partially state-funded—the news of Deripaska’s communications with the Trump campaign brought…crickets. Typically, Deripaska is a regular figure in the Russian press. The newspaper RIA Novosti, for instance, covered Deripaska’s attendance at a meeting between Putin and business leaders the day after the Post published its story, and several days earlier RIA had written about a nationwide competition for the best school directors funded by Deripaska’s foundation. Yet the magnate’s ties to a massive intelligence investigation in the US didn’t rise to the level of coverage. Among the three most-watched TV channels—all state-owned—no segments about the story aired at all.

That’s not because the Russian press isn’t interested in the Trump-Russia investigation writ large. The day before the Deripaska news broke, actor Morgan Freeman appeared in a dramatic two-minute YouTube video announcing the launch of the Committee to Investigate Russia. Set to an ominous soundtrack, Freeman declared “We are at war” because democracy is “under attack by the Russian government” and Putin, a “true KGB spy.” Unlike the news of Manafort’s emails to a Kremlin-linked billionaire, the actor’s video—by most accounts a flashy PR stunt—blew up.

Putin’s press secretary issued a statement calling the video “groundless and of an exclusively emotional character” and said that the 80-year-old Freeman had become a “victim of emotional strain.” Every state-funded TV channel covered the video in depth. State TV channel Rossiya 24 devoted a segment to evaluating Freeman’s mental state. One newscaster attributed Freeman’s participation in the video to marijuana use, while a psychologist posited it was due to “megalomania” Freeman developed after playing both god and the president in several Hollywood blockbusters.

“It was immediately all over the government press, and it was interpreted as ‘Americans have lost their minds,'” says Vasily Gatov, a visiting fellow and Russian media researcher at the University of Southern California’s Annenberg Center on Communication Leadership and Policy.

“The idea of US bias towards Russia has been sort of a Russian media constant.”

Over the past year, Russian print, TV, and radio outlets with ties to the state have vacillated between virtually ignoring big events reported by US media—seeming to shy away from stories that may implicate those close to power in Moscow—while playing up the stories that lend themselves to the type of anti-American foreign policy coverage typically appreciated by Russia’s powers that be. “The main state-influenced media—either they don’t cover this investigation at all, or if they cover it, they deliver it as an exemplification of Russophobia,” says Gatov. “They cherry pick the issues where they can say something productive, from their point of view, for domestic discourse.”

This selective coverage is not hard to spot. In late May, for instance, the New York Times reported that investigators are looking into Jared Kushner’s December 2016 meeting with Sergei Gorkov, the chief of Vnesheconombank, Russia’s state-owned development bank and a close ally of Putin’s. Much of the state-controlled press didn’t cover the news in March when the Times first reported the meeting, or in May when it became clear the meeting had piqued investigators’ interest. Just a few weeks later, however, Russian print and TV outlets devoted loads of airtime to the firing of three CNN journalists over a retracted article that had alleged a connection between Anthony Scaramucci, then Trump’s communications director, and a Russian investment fund.

One of the biggest news stories about the investigation dropped the next month when, after reporting by the New York Times outed some of the details of his June 2016 meeting with Russian lawyer Natalia Veselnitskaya, Donald Trump Jr. published a series of his emails on Twitter. The messages showed that Trump Jr., Manafort, and Kushner had all met with Veselnitskaya and several other Russians after being promised incriminating information about Hillary Clinton through a chain of communication that originated with Russia’s “crown prosecutor” as part of a Kremlin effort to assist Trump. The father-son Russian real estate moguls Aras and Emin Agalarov, who had been business partners of Trump, were the conduits through which the meeting was set up.

In Russia’s state-controlled press, the story was mostly covered through the lens of Veselnitskaya’s denials—nevermind the three high-profile Russians who’d been instrumental in orchestrating the meeting. First, numerous state-controlled outlets published stories quoting from Veselnitskaya’s NBC interview where she denied having any incriminating information, and claimed she had only come to the meeting to discuss US sanctions on Russia, specifically the Magnitsky Act. Across the next few weeks, she gave multiple interviews in which she alleged that financier Bill Browder—a key advocate for the Magnitsky Act sanctions Vesenlitskaya opposes—had surveilled her and her family, and that he had “orchestrated” the story of her meeting with Trump Jr. These various denials were widely covered. Meanwhile, the involvement of the Agalarovs —both of whom are regularly covered in the Russian press—received at best a passing mention in most stories. A Rossiya 24 program did mention the Agalarovs’ involvement, but in a piece headlined: “Scandal with Trump Jr. emails: much ado about nothing.”

Some outlets do try to remain neutral, publishing straightforward news stories about the investigation. And independent outlets like newspaper Novaya Gazeta or the TV station Dozhd publish stories that break news or flout the Kremlin line—Dozhd, for instance, regularly discusses developments in the Trump-Russia investigation. But the independent press’s audience numbers are relatively low: The print circulation, for Novaya Gazeta, considered Russia’s most prominent opposition paper, is about 48,500.

“The main state-influenced media—either they don’t cover this investigation at all, or if they cover it, they deliver it as an exemplification of Russophobia.”

But these are the exception. For the most part, Russians’ primary sources of news are state-influenced. TV is by far the most popular source of news, and the most tightly controlled, says Gatov, himself a former Russian print journalist and later analyst who worked and wrote for papers like Izvestia and Argumenti I Fakti but left the industry about a decade ago following concerns over increasing censorship.

Putin has made a point of consolidating state control of the media since coming to power in 2000, ramping up this effort in 2008, following the Georgian War. “It was like a cancer,” Gatov says. Since then, the three most-watched Russian TV channels—Channel One, VGTRK, and NTV—have all come to be directly or indirectly owned by the state, as have a number of large print outlets, like TASS. Meanwhile, other print publications—from Rossiya Segodnya to Lenta.ru—have faced “restructuring” involving the hiring of Kremlin loyalists into top editorial positions.

Now that it has a tight grip on the press, the Kremlin does do some explicit monitoring of the press. Putin’s first deputy chief of staff, Alexey Gromov, is considered the Kremlin’s liaison to the media, and he directs political coverage, sometimes through “strategy meetings” with top editors at Russia’s major media outlets.

But often, coverage is not explicitly dictated by the Kremlin. It doesn’t have to be. “It relies more on self-censorship and the creativity of the editors and how they choose to represent a particular subject,” Gatov says. “Because they are experienced in self-censorship, they kind of know what would be comfortable for Putin and be presented to him as a great achievement of propaganda or counter-messaging.”

When the government funds or otherwise controls a media outlet, it makes sense that in cases like the US investigation into possible collusion between Russia and Trump, Russian journalists would take pains to avoid criticism of those with potential Kremlin connections. “There is absolutely no incentive to mention these individuals, and there is a huge disincentive,” says Sarah Oates, a political communications professor at the University of Maryland. “If they are part of the powerful elite of Russia, it’s a lose-lose for the media to highlight these individuals.”

Politics aside, critical coverage of Russian elites is also just generally bad for business, since some of these Kremlin-linked billionaires are also major media advertisers. Deripaska, for instance, holds a stake in Ingosstrakh, one of Russia’s main insurance companies and a major media advertiser. “There are very few Russian media organizations that don’t have a relationship with him,” Gatov says of Deripaska.

But the Russian media’s selective coverage is also a response to the interests of their readers. There is a widespread skepticism among Russians towards this investigation, in part because many Russians have been desensitized to corruption, says Oates, but also because the state-controlled press has helped perpetuate the idea of a Russophobic American approach for years—far before Trump entered the political scene.

“The idea of US bias towards Russia has been sort of a Russian media constant,” says Cynthia Hooper, a professor of Russian studies at the College of the Holy Cross. “That’s clicked to a huge extent. So Russians don’t really take the Russia investigation seriously.”

The Russian press ramped up its finger-pointing at American Russophobia in 2014, on the heels of Russia’s annexation of Crimea, says Hooper. After the US imposed sanctions on Russia, the state media railed against the United States for trying to portray Russia in “unfair ways,” says Hooper, pointing out what they considered to be Americans’ blind acceptance of the Ukrainian government’s statements, or accusing the US of seeking to recast the conflict in Cold War terms.

This has helped create a climate in which it’s easy for the Russian press, and its readers, to dismiss the Russia investigation as the product of America’s anti-Russia bias—and maybe even to view its underlying allegations in a positive light. “There is a widespread popular sentiment that its time for Russia to stick up for itself and stick it to the US and show that it is an equal power,” Hooper says. “I don’t think any kind of popular outcry would result, even if it was proven the country interfered.” If anything, Hooper says, it might earn Putin accolades: “If it actually happened, they may feel like, ‘Well, go Putin.’ That just proves that we have a really smart leader.”