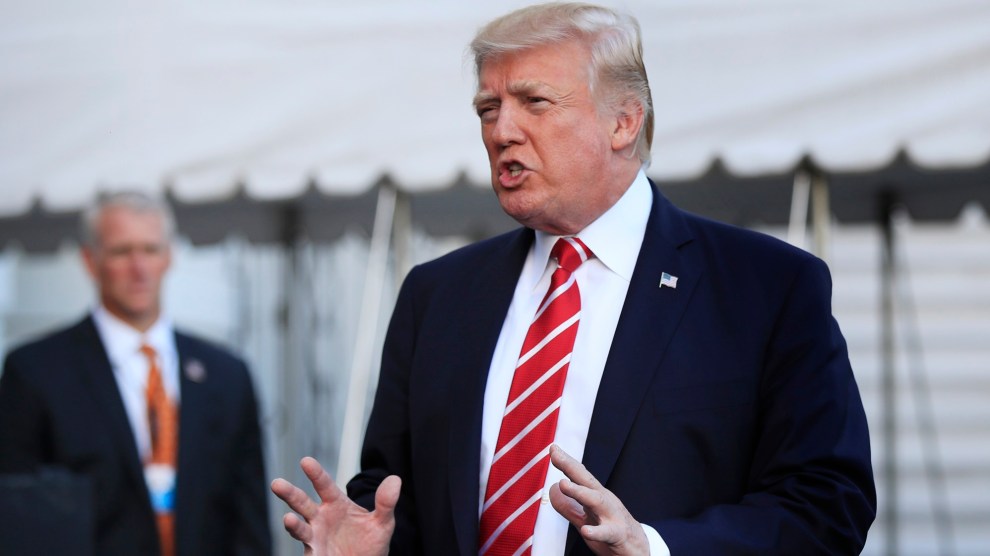 Many on the right were outraged last month when top congressional Democrats announced they’d struck a deal with President Donald Trump to protect nearly 700,000 undocumented immigrants, known as Dreamers, from deportation. The deal, the Democrats claimed, would include increased border security but no border wall. Steve Bannon’s Breitbart responded by labeling the president “Amnesty Don.” Trump has apparently gotten the message.

On Sunday evening, Trump sent Congress a sweeping list of hardline policy demands that he says “must be included” in any legislation to protect the Dreamers previously covered by Barack Obama’s Deferred Action for Childhood Arrivals program. Trump ended DACA in September, but he’s said that Congress should pass a bill to legalize Dreamers—who came to the United States as children—before March, when they’ll begin losing protections from deportation.

“When you make an offer you know the other side simply cannot agree to, it is evidence that you don’t actually want a deal.”

The documents released by the White House Sunday read like an anti-immigration wish list. They include funding for Trump’s border wall, drastically increased immigration enforcement, and even new restrictions on legal immigration. The proposal is widely seen as a non-starter for Democrats. That may be the point. Stephen Miller, Trump’s top immigration adviser and a longtime opponent of DACA, could be trying to stop a potential deal.

It’s hard to exaggerate just how lopsided the White House’s proposal is. Essentially, Trump is demanding Congress pass nationalist immigration reform in exchange for protecting Dreamers, who make up less than 10 percent of undocumented immigrants. On top of that, Dreamers would not even get citizenship if the administration gets it way.

The administration divided its proposals into three sections: border enforcement, enforcement within the United States, and merit-based immigration. Building the wall, just one bullet point in the border enforcement bucket, would be enough to derail a Dreamer deal with Democrats. Other Trump proposals include making it much easier to detain and deport unaccompanied children fleeing violence in Central America, hiring 10,000 Immigration and Customs Enforcement officers, and requiring employers to use E-Verify to check their workers’ immigration status.

The framework also calls for transforming legal immigration by implementing a points-based merit system for awarding green cards. That is a fundamental shift from today’s focus on family-based migration. The White House seems to be envisioning something along the lines of the RAISE Act, a conservative bill that would cut legal immigration by half—but the proposal does not mention it by name.

Not surprisingly, House Minority Leader Nancy Pelosi (D-Calif.) and Senate Minority Leader Chuck Schumer (D-N.Y.) aren’t happy. “The administration can’t be serious about compromise or helping the Dreamers if they begin with a list that is anathema to the Dreamers, to the immigrant community and to the vast majority of Americans,” they said on Sunday in a joint statement. They added that the proposal goes “far beyond what is reasonable” and “fails to represent any attempt at compromise.”

Immigrants’ rights advocates went further. Marielena Hincapié, the executive director of the National Immigration Law Center, wrote on Twitter, “When you make an offer you know the other side simply cannot agree to, it is evidence that you don’t actually want a deal.”

Frank Sharry, executive director of the pro-immigration America’s Voice Education Fund, said in a statement that the White House’s “poison pill measures” threaten to kill the chances of passing the Dream Act, a bipartisan bill that would give DACA-recipients and other young undocumented immigrants a path to citizenship.

David Leopold, a Cleveland-based immigration lawyer and the former president of the American Immigration Lawyers Association, tweeted that the list reflects a white supremacist agenda.

Trump’s untenable demands call into question his commitment to helping Dreamers. Two days after ending DACA, Trump told Dreamers that they have nothing to worry about.

For all of those (DACA) that are concerned about your status during the 6 month period, you have nothing to worry about – No action!

A week later he asked if anyone really wants to throw out to “throw out good, educated and accomplished young people who have jobs.”

But in a now familiar pattern on immigration, Trump has returned to his base. Rep. Luis Gutierrez (D-Ill.), Congress’ most vocal critic of the president’s immigration agenda, told the Washington Post that Pelosi and Schumer should have seen it coming. “I warned Democrats not to negotiate, to say that what we wanted was a clean Dream Act,” he said.

Trump “has never wavered from his xenophobic positions,” Gutierrez added. “I never understood—I just never got it, how you go from Charlottesville and white supremacists to reaching an agreement with him.”