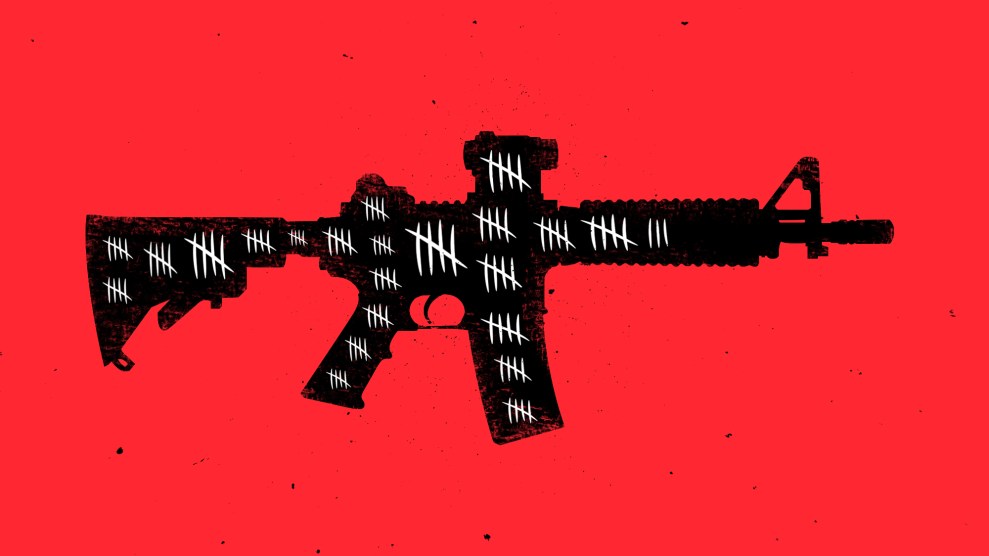 The day after the gun massacre at the First Baptist Church in Sutherland Springs, Texas, filmmaker Michael Moore—whose 2002 documentary “Bowling for Columbine” tackled that watershed mass shooting—took note of a particular fact. “As of yesterday,” he told his millions of Twitter followers, “Columbine is no longer one of the 10 worst mass shootings in US history.”

The Texas attack came just a month after the one at a country music festival on the Las Vegas Strip—widely declared “the worst mass shooting in modern US history,” which was true, by an order of magnitude, in terms of the overall number of people wounded and killed. An NBC News report on the church massacre opened by noting that it was “the worst mass murder in Texas history.” Other outlets observed that the crime committed by a former airman with a record of violent domestic abuse had finally outdone the infamous clock tower mass shooting at the University of Texas-Austin in 1966.

This was pointed, accurate news coverage, and it spoke to an all-too-familiar, soul-wearying sense of horror and exasperation about America’s mass killings.

But it’s time to stop emphasizing body counts. It adds nothing significant to the coverage—and it may actually exacerbate the problem.

I say this as a journalist who built the first open-source database of mass shootings and who has studied and reported in-depth on this phenomenon for the past five years. Along the way I’ve learned a lot about the problem—including what can help inspire potentially dangerous people to conceive, plan, and then carry out these heinous acts. One key factor is a fascination with high-profile mass shootings, and an explicit desire to top their death tolls. It’s part of a broader goal seen among many perpetrators: the desire for lasting infamy.

In August 2015, a disgruntled ex-TV journalist gunned down two former colleagues as they were doing a live broadcast in Virginia. Before he struck, Vester Flanagan had written about admiring the mass murderer at Virginia Tech in 2007—and how that shooter had outdone the two at Columbine: “I was influenced by Seung-Hui Cho,” Flanagan wrote. “That’s my boy right there. He got NEARLY double the amount that Eric Harris and Dylann Klebold got…just sayin.'”

Flanagan himself provoked a new kind of sensational media coverage by filming his attack and posting the footage on Twitter and Facebook as he fled the crime scene. (He killed himself shortly thereafter as police closed in.) The copycat cycle would soon continue. “So many people like him are all alone and unknown, yet when they spill a little blood, the whole world knows who they are,” wrote Christopher Harper-Mercer, who carried out a mass shooting five weeks later at Umpqua Community College in Roseburg, Oregon. “His face splashed across every screen, his name across the lips of every person on the planet, all in the course of one day. Seems the more people you kill, the more you’re in the limelight.”

The phenomenon goes back to the early age of television. In July of 1966, the rape and mass murder of eight women in Chicago commanded widespread news coverage. That August came the clock tower shooting in Austin, where 16 were killed, including a pregnant woman, and 31 others were injured. A young man who’d been riveted by news reports about that shooting walked into a beauty school in Arizona three months later and opened fire. Once in custody, he referenced both mass murder cases and described his ambition: “I wanted to kill about 40 people so I could make a name for myself. I wanted people to know who I was.”

News media “run the risk of essentially creating a national ranking,” says one expert, “which might lead subsequent perpetrators to kill even more people so that they can be ‘number one’ and go down in history.”

This problem is prevalent in another dataset I built in 2015 to research the “Columbine effect”—scores of cases in which mass shooters and would-be attackers have been influenced in various ways by the 1999 high school massacre. More than a dozen cases since then involved perpetrators specifically with ambitions to surpass Columbine’s body count.

Among them: An enraged man who threatened to attack a school in California, vowing “to make Columbine look like a fucking tea party.” Two brothers in Oklahoma who stabbed five of their family members to death and aimed to continue murdering enough other people to become “more famous” than the Columbine killers. A teenager who plotted to blow up his high school in Utah, who told police he was offended by being compared to the Columbine attackers because they “only completed one percent of their plan” and he was smart enough to do better. A young man who planned to bomb and shoot up a Florida high school, who wanted to “break the record” of Columbine and Virginia Tech.

“When the media highlights the magnitude of attacks as ‘the largest’ or as having the most victims, it is imbuing the perpetrator with what might be perceived as a status or power that others want to emulate,” psychologist Peter Langman, an expert on school shootings, told me. By dwelling on and comparing death tolls, he says, news media “run the risk of essentially creating a national ranking, which might lead subsequent perpetrators to kill even more people so that they can be ‘number one’ and go down in history.”

A fresh example of the potential danger followed the mass shootings in Las Vegas and Texas. On November 16, a man in Ohio was taken into custody by local and federal authorities after allegedly texting death threats to his estranged wife, vowing to shoot up the Las Vegas hotel and casino where she worked. Prior to sending the messages he’d cased the venue, according to court records. He also threatened to open fire at a church of about a 1,000 people they’d attended. He declared that his killing spree would be the “biggest in history.”

In October, the FBI released a cache of partially redacted investigative documents from the Sandy Hook Elementary massacre; among the details was an interview with a woman who’d interacted extensively with Adam Lanza online. The woman told investigators that Lanza conveyed his “respect and understanding” for school shooters and had obsessively researched mass murders, constructing a spreadsheet that meticulously documented hundreds of cases.

That chilling detail suggests a kind of Gordian knot with this problem: The data Lanza was collecting was primarily a reflection of what journalists had documented. (Moreover, it’s not uncommon for law enforcement agents and mental health experts to tap investigative journalists’ work as part of researching the complex process leading to these attacks.)

We should also cease playing up perpetrators’ rage-filled manifestos or self-styled tough-guy photos—which is precisely what many of them want.

Improvement, then, may also be partly the responsibility of journalists. We should step back from our fixation with death tolls; we should also cease playing up perpetrators’ rage-filled manifestos or self-styled tough-guy photos grabbed from social media—which is precisely what many of them want. To be clear, that doesn’t mean we shouldn’t report on those elements at all—just that we should think twice about how much and in what context we highlight them.

When Twitter timelines erupt with breaking news about the latest “active shooter,” the twin temptation of speed and sensationalism is powerful for journalists (and everyone else). Yet it might not have been prudent to immediately post a Facebook video, as many did, from the mass murderer in Hesston, Kansas, in which he showed off himself firing an AK-47 into an empty field a few months before he went on his rampage.

The accumulating forensic evidence from copycat killers strongly suggests that these choices matter. Consider how the Houston Chronicle‘s inadvertent emphasis on the toppling of a record in Sutherland Springs might resonate with the next aspiring killer: “The Columbine massacre remained among the top 10 deadliest shootings in modern U.S. history for 18 years.” But the Texas killer had finally bumped it off the list, and “the First Baptist Church shooting is now the fifth deadliest mass shooting in modern U.S. history.”

To see just how ingrained this kind of scorekeeping has become, look no further than the Wikipedia entry for the Texas church massacre (as of mid November), where the second paragraph draws from three news reports:

The grim ranking has even made its way into an update atop the page for the half-century-old University of Texas-Austin case: “As of November 2017, the attack is ranked as the eighth deadliest mass shooting in US history.”

It is in the public interest, of course, to report on who is injured and killed in mass shootings. With a case like Las Vegas, the extraordinary scope and tactics certainly warranted major attention and reporting. And it may well be worthwhile to consider that the more than 600 total victims injured and killed exceeded the next highest overall toll from a mass shooting by sixfold, whether in relation to disaster response, security measures, or gun regulations.

But as with the other guidelines I suggested in my 2015 investigation into how sensational media coverage can influence mass shooters, journalists can also do a better public service by describing death tolls as dispassionately as possible. It’s a relevant, sometimes important data point. But reporters and editors—including here at Mother Jones—also need to pause and think about how our coverage might resonate with the next disturbed individual who may be competitively tallying kills.

Mass shooting body counts are not a competition. We should treat them as sensational achievements no more.