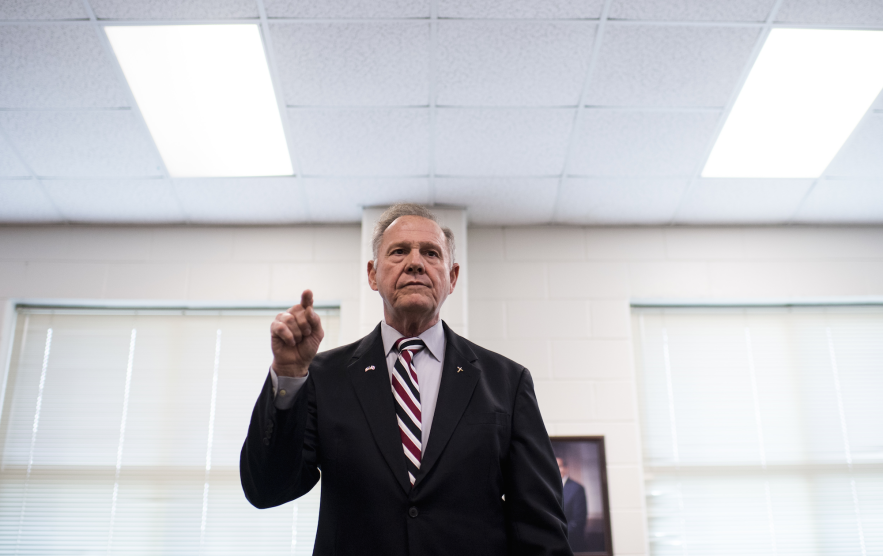 Nearly a dozen Republican senators, including majority leader Mitch McConnell, have called on Roy Moore to bow out of Alabama’s upcoming special election to fill Attorney General Jeff Sessions’ seat if the allegations detailed in a bombshell Washington Post report prove true. The Post reports that Moore, a religious conservative known for his extremist views, pursued relationships with teenage girls—one as young as 14—when he was in his 30s.

The statue of limitations has long since passed, so it’s unclear what further proof Republican senators would need beyond the on-the-record accounts of the four women who spoke to the Post about their experiences with Moore. Moore’s exit from the high profile race is unlikely because Alabama law prohibits candidates from withdrawing within 74 days of an election. With the special election scheduled for December 12, Moore’s name will remain on the ballot even if he does decide to drop out.

The former judge has vehemently denied the report, dismissing the allegations as a political attack. In a statement, Moore appeared to accuse the Post of plotting to sink his bid with the story because the paper endorsed his opponent, Democrat Doug Jones.

Moore has attracted national attention for his extremist conservative views, which include the frequent use of racial slurs, support for criminalizing homosexuality, and Islamophobia. In 2003, he was removed from his office of chief justice for refusing to remove a statue of the Ten Commandments from his courtroom.

Majority Leader Mitch McConnell, leaving the Senate chamber: "If these legations are true, Roy Moore should step aside for all the obvious reasons. Very disturbing allegations."

Sen. Jeff Flake says if allegations against Roy Moore prove true, he should withdraw from the race. @bethreinhard

Sen. Richard Shelby (R-AL) on Roy Moore: “If that’s true, he wouldn’t belong in the Senate.”

Tim Scott on Roy Moore: “If they’re accurate, he should step aside.”

Senate Republicans abandoning Roy Moore in droves. David Perdue to @tedbarrettcnn: “It’s devastating. If those allegations are true than he should step aside. I’m sorry but this is untenable, if they are true. I just saw the story but this is very serious.”

The allegations against Roy Moore are deeply disturbing and disqualifying. He should immediately step aside and allow the people of Alabama to elect a candidate they can be proud of.

Portman says Moore should drop out of the race if the Moore reports are true, says he has “no reason to doubt” @washingtonpost’s reporting. pic.twitter.com/PM4SoFmupn