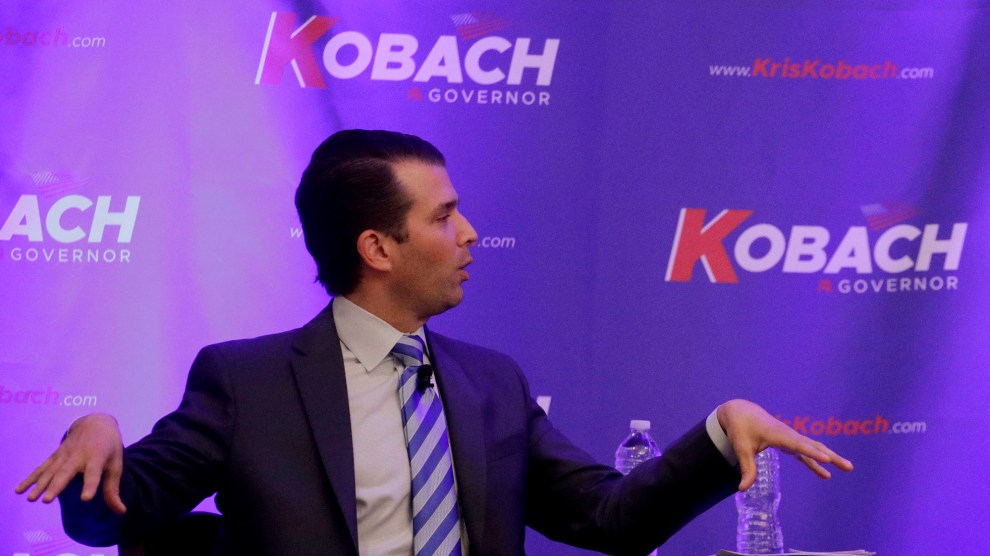 The June 2016 meeting at Trump Tower where Donald Trump Jr. hoped to obtain dirt on Hillary Clinton from a Russian lawyer drew follow-up emails from at least one participant at the gathering, despite Trump Jr.’s insistence that he cannot recall these interactions.

CNN reported Thursday that Rob Goldstone, a British publicist who helped set up the meeting, emailed Dan Scavino, who did communications work for the Trump campaign and is now the White House director of social media, after their meeting. Goldstone urged Scavino to ask then-presidential-candidate Donald Trump Sr. to create a page on a Russian social media site to connect with Russian Americans. Goldstone said that “Don and Paul” supported the idea, meaning Trump Jr. and Trump’s campaign chairman at the time, Paul Manafort, who also attended the meeting.

Goldstone, according to CNN, initially suggested the social media idea as the Trump Tower meeting was ending. There is no indication that the campaign acted on the suggestion. The report does not say when Goldstone contacted Scavino, and it is not clear if Goldstone emailed Scavino at Trump Jr.’s behest.

Trump Jr.,  Manafort, and Jared Kushner, President Trump’s son-in-law who also attended the June 9 meeting, have downplayed the gathering. None have spoken publicly about setting up a page on a Russian social media site. When asked about Goldstone’s email during a nearly eight-hour interview by the House intelligence committee on Wednesday, Trump Jr. said he did not recall the discussion, CNN reported. Goldstone and other participants in the meeting have turned over related emails to congressional investigators, including the House committee.

Goldstone is a lawyer for Emin Agalarov, an aspiring pop singer, whose father, Aras Agalarov, is a Russian real estate tycoon who is friendly with Russian President Vladimir Putin. Prior to the June 9 meeting, Goldstone famously told Trump Jr. in an email that the Russian attorney who attended, Natalia Veselnitskaya, could provide dirt on Hillary Clinton.

Goldstone also wrote another email following the meeting. On June 14, five days after the meeting, Goldstone forwarded an article to Emin Agalarov that reported Russia had hacked into the Democratic National Committee’s email accounts, according to CNN. Goldstone called the news “eerily weird” given the recent Trump Tower meeting discussion about dirt on Clinton.

Finally, the CNN report notes that the New York Times’ July 2017 report on the Trump Tower meeting prompted an email from the son of Ike Kaveladze, a US representative for the Agalarovs who also attended the Trump Tower meeting. George Kaveladze asked his father why Trump Jr. admitted to “collusion,” by posting his emails with Goldstone ahead of the Times report. It was not clear if that question was a joke.