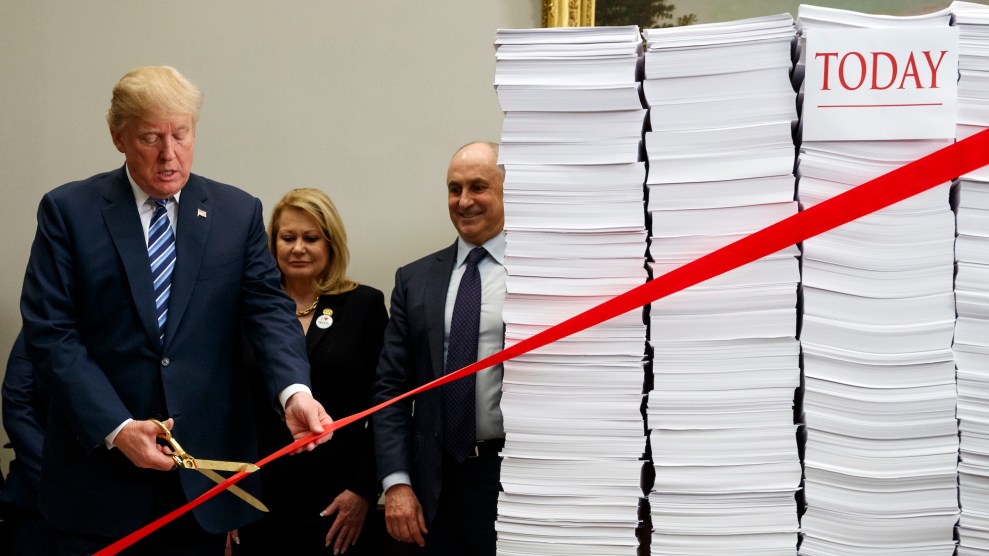 President Donald Trump cuts a ribbon during an event on federal regulations in the Roosevelt Room of the White House, Thursday, Dec. 14, 2017, in Washington.Evan Vucci/AP

At an event last Thursday to tout his administration’s efforts to rid the federal government of what he contends is burdensome red tape, President Donald Trump used oversized gold scissors to cut a piece of red ribbon strung between two stacks of paper.

In short order, he promised, his administration would excise some 165,000 of the more than 185,000 pages in the Code of Federal Regulations.

That’s no easy task. Changing federal regulatory laws can mean a congressional slog. And for federal agencies to rescind rules, they must engage in a time-consuming process that opens them to public scrutiny and potential legal challenges.

But there are ways to get around these impediments. Collectively, you might call them dark deregulation.

Here are five techniques being used by the Trump administration.

An agency can’t regulate blind. Deprive a regulator of information, and it can’t do much.

The Equal Employment Opportunity Commission enforces workplace discrimination laws. In September 2016, it announced that it would require certain larger employers to report wage and hour data by gender, ethnicity and race. “Collecting pay data is a significant step forward in addressing discriminatory pay practices,” Jenny Yang, who was the EEOC’s chair, said at the time.

This August, the White House budget office suspended the plan indefinitely while the office reviews it. The decision relied on an obscure law called the Paperwork Reduction Act. Passed in 1980, Congress intended it as a way to cut down on interminable compliance requirements. But from the beginning, opponents warned it would make it harder for agencies to do their jobs. In a letter to the EEOC, Neomi Rao—the administrator of the Office of Information and Regulatory Affairs—wrote that the EEOC’s plan to collect salary data “lack[ed] practical utility” and was “unnecessarily burdensome.”

Although the hold on collection of salary data is not permanent, equal-pay organizations read Rao’s letter as the death knell for the data collection effort, which they expect will hinder the government’s ability to bring discrimination cases against employers. Organizations representing employers have argued it won’t since the salary data was too generic to allow the EEOC to detect wage discrimination accurately anyway.

This use of the Paperwork Reduction Act may not be a one-off. Rao signaled recently that her staff was likely to continue to wield the law to limit agency initiatives to gather information.

Sometimes, just doing less adds up to deregulation, in a form that’s difficult to identify and even harder to challenge in court.

That pattern sets Clayton apart from two SEC chairs appointed by President Barack Obama, Mary Schapiro and Mary Jo White, Velikonja said. Data she shared with ProPublica show that the number of new enforcement actions remained roughly steady or rose in the months after Schapiro and White took office, in 2009 and 2013 respectively.

The 2017 data indicates that “something has changed,” Velikonja said. “Why it changed is a much more complicated narrative.”

At a conference earlier this fall, Steven Peikin, who co-directs the SEC’s Enforcement Division, suggested that the agency may start pursuing fewer cases, devoting resources only to those cases that “send a broader message.” (Peikin’s co-director, Stephanie Avakian has disputed claims that the SEC is giving Wall Street a pass.)

“What we’ve seen thus far is very surprising,” said Sara Gilley, a principal at Cornerstone. “We did not expect such a large drop-off.” But, she added, “it’s too early to tell if the change is because Clayton is going after big cases,” which would take time to build, or for some other reason, like the SEC simply cutting back on enforcement.

The White House’s decision to impose a so-called “regulatory budget” on government agencies is one of its more innovative moves to shrink the footprint of the federal bureaucracy. Each agency’s allotment creates a sort of deregulatory cap-and-trade system designed to force the agency to make it cheaper for the private sector to comply with rules.

The budget flows chiefly through the White House budget office—and, in particular, Rao’s regulatory affairs staff—often called the “gatekeeper” of the administrative state, which does such wonkish work that it draws little public attention or pushback. “We’re small but mighty,” Rao said of her staff at an October event at the Heritage Foundation, a conservative think tank in Washington.

The regulatory budget caps the costs an agency can impose on industry each year through rule-making. No matter the social benefit of the new rule, the agency has to offset the cost of complying with it by reducing what it costs to comply with at least two existing rules.

“A regulatory budget could have the most far-reaching impact of any executive branch regulatory reform” since the Ford administration, researchers at the Brookings Institution wrote in October.

The administration believes the regulatory budget is working. On Thursday, it reported that agencies across the federal government (excluding some independent agencies, like the SEC) had slashed annual compliance costs by $570 million for the 2017 fiscal year. For 2018, the White House announced, agencies collectively will have to cut annual compliance costs by more than $685 million.

The rush toward the end of the Obama administration to finalize lingering rules left many of them to go into effect after Jan. 20, when Trump took office. That left open a possibility the White House has embraced: delay.

It’s a lot easier to justify postponing a rule than it is to justify killing or revising it. While the agency decides the rule’s ultimate fate, the people and businesses affected are free to ignore the rule’s requirements.

After a spate of miner deaths between 2013 and 2015, the Mine Safety and Health Administration proposed a rule to protect miners at hard rock and other non-coal mines. The rule was simple. Mine operators would have to inspect work sites for hazards before a new shift of miners began work. Previously, operators could inspect the site after work had begun.

MSHA finalized the rule in January and gave mine operators four months to comply. Since then, the agency has repeatedly delayed the rule, maintaining that mine operators needed more time to come into compliance. How much time? Nearly a year and a half. The rule is now set to go into effect in June 2018.

The rationale for delay doesn’t make much sense to Joseph Main, who headed MSHA during the Obama administration. During his tenure, he said, it took only a few months to get mine operators up to speed on much more complicated regulatory changes.

“It was such a common-sense rule,” Main said. “It’s really simple. The time taken—the delay to train up the industry—I think is beyond belief here, to say the least.”

By September, another reason for the delay had emerged: MSHA has proposed relaxing the rule so mine operators could inspect work sites “as miners begin work.”

Many agency rules include exceptions to their requirements—when or where the rule applies, to whom it applies. Interpreting exceptions expansively or using them more aggressively are ways to cut back on a rule’s practical effect without revising it or taking it off the books.

Take the environmental reviews mandated by a 1970 law called the National Environmental Policy Act. NEPA requires agencies across the federal government to document the environmental impacts of major actions they plan to take. The process includes a chance for the public to comment on the government’s plans.

The Trump administration earlier this year announced plans to reduce “unnecessary burdens and delays” caused by NEPA reviews. To help achieve its goal, the administration has asked federal agencies to turn to “categorical exclusions.” Those are categories of government action that don’t require an environmental review. Examples include approving construction of short natural gas pipelines and laying a bike path.

Agencies are listening. Last month, for instance, a task force at the Department of Energy recommended that the agency consider granting more categorical exclusions. It singled out as an example geothermal energy projects on federal lands. (The recommendations remain under White House review.)

The NEPA process often takes months or years, and it is a longtime target of conservative groups, which say it needlessly delays energy and infrastructure projects and increases their cost. But environmental groups worry that an overeager turn to categorical exclusions will undermine NEPA’s core purpose.

“There are communities where, but for NEPA, nobody would know a highway is going to be built,” said Scott Slesinger, the legislative director for the Natural Resources Defense Council. “The idea is, when the government comes in to do something, they should look before they leap.”