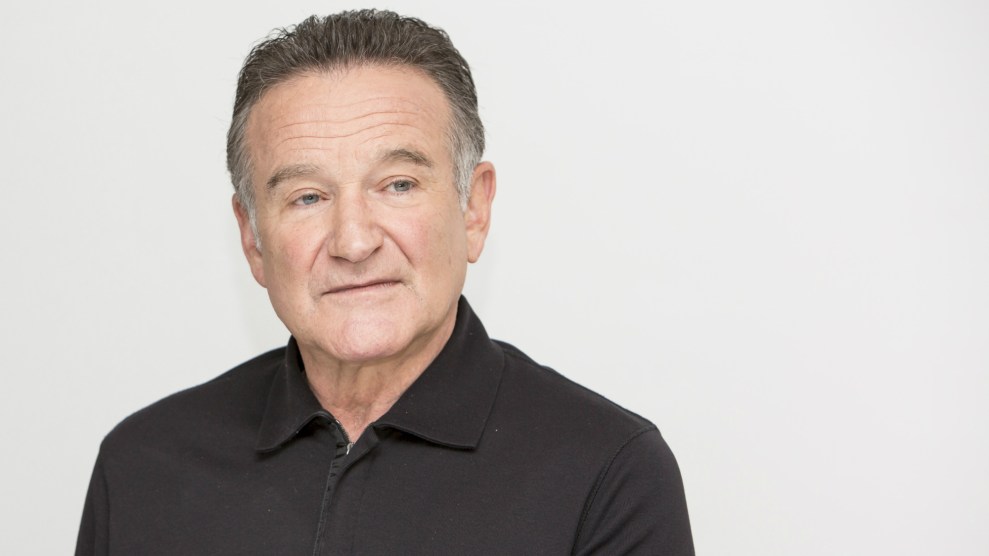 In August 2014, actor and comedian Robin Williams, famous for his roles in movies like Dead Poets Society, Good Will Hunting, and Mrs. Doubtfire, committed suicide at his home just north of San Francisco. He was 63 years old and, as the public would later find out, was struggling with depression and dementia. In the weeks after his death, headlines like, “Robin Williams hanged himself in bedroom with a belt, sheriff says” and “Robin Williams Committed Suicide by Hanging Himself, Police Say,” flooded newsstands and newsfeeds across the country.

Now, new research shows that such coverage might have contributed to a horrible and unintended consequence: a spike in suicides in the following months. A study published Wednesday in the journal PLOS ONE, and led by researchers from Columbia University’s Mailman School of Public Health, shows that the number of suicides in the US between August and December 2014 increased from expected numbers by about 10 percent, from an expected 16,849 cases to 18,690 cases. (The expected cases were determined using historic mortality data from the Centers for Disease Control for January 1999 to July 2014. The team then used a computer model to predict how many suicides were “expected” to happen during the given period, under regular seasonal conditions.)

“One of the unique things about this study is that you can see, in 2014, this very abrupt increase that happens in suicides over what you’d see in previous years,” David Fink, a PhD candidate at Columbia and lead author on the study, tells Mother Jones. “That large increase was the first piece of evidence that helped us know what’s going on.”

While suicides increased across all ages and genders in the months following Williams’ death, the researchers saw the largest increase in men and people between the ages of 30 and 44. The number of people committing suicide by suffocation, the same method as Williams, surged by about 30 percent over the five-month period, while all other methods increased by about three percent.

This rise in possible “copycat suicides,” the authors write, is likely an example of the “Werther effect,” a phenomenon coined by suicide researcher David Phillips. (He named the effect after the 1774 Goethe novel, The Sorrows of Young Werther, which tells the story of a man who shoots himself after a love interest falls for someone else—and is widely blamed for the flood of young European men killing themselves shortly after the book’s release.)

“Once they see somebody else that they relate to that is able to take that action, it becomes feasible in a way…That’s why it’s a similar age group, a similar sex, a similar method.”

“The belief is that you have someone that’s already contemplating [suicidal] behaviors, but they’re not capable of taking that action,” says Fink. “But once they see somebody else that they relate to that is able to take that action, it becomes feasible in a way…That’s why it’s a similar age group, a similar sex, a similar method.”

The researchers note that they can’t draw a direct link between Williams’ death and the rise in suicides over the following few months, but there is solid historic evidence to suggest that high-profile suicides can cause a rise suicides in the broader population. On average, in the weeks following a celebrity suicide, suicides increase by approximately 0.26 per 100,000 people (on a nation-wide scale, that adds up to thousands of people), according to prior research referenced in the study. For instance, in the month after Marilyn Monroe’s death in 1962 from an apparent suicide, the national suicide rate rose by 12 percent.

“There is some evidence for imitative suicidal behaviors occurring in response to the reporting of suicides in the media,” Mark Kaplan, a professor of social welfare at UCLA, tells Mother Jones. Though not involved with this study, Kaplan has studied suicides at the population level for about 25 years, and says the spike in suicides following Williams’ death is “consistent” with the literature.

In the months after Williams took his life, news coverage including the terms “suicide,” “dead,” and “Robin Williams,” also jumped, according to the new study, as did posts on Reddit’s “SuicideWatch” forum, a suicide support platform, according to a related 2015 study. This suggests, Fink and his co-authors write, “that media reporting possibly [induces] changes in suicidal ideation.”

To combat copycat suicides, the World Health Organization has issued a series of recommendations for reporting on suicide. For example, the WHO recommends against printing sensationalist headlines, the details of a person’s suicide, or pictures of grieving families. And when media guidelines are followed, says Fink, research shows it can have a positive effect. “Hopefully with more research, we can develop policies that reduce [suicide] rates in the future,” he says.

If you or a loved one are contemplating suicide, there is help. Call the National Suicide Prevention Hotline at 1-800-273-8255.