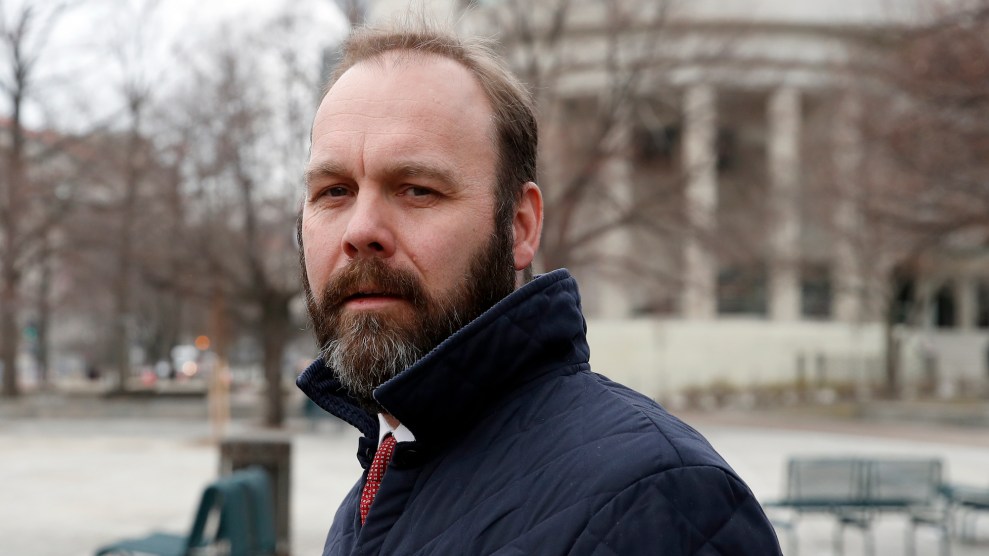 Rick Gates, the longtime business partner of former Trump campaign chairman Paul Manafort, has decided to plead guilty and cooperate with prosecutors, ending weeks of speculation about his fate and highlighting what has long remained true: Gates and Manafort are in deep trouble, and that is a big problem for President Donald Trump.

The New York Times reported Friday morning that Gates will plead guilty as soon as Friday afternoon. A criminal information document filed in Washington on Friday indicates Gates will divulge what he knows to Robert Mueller’s team. Gates, along with Manafort, was indicted in October on charges related to money laundering, fraud, and unregistered foreign lobbying. A superseding indictment unveiled Thursday added tax evasion and bank fraud charges.

There have been conflicting reports in recent days over whether Gates planned to make a deal with Mueller. But a letter Gates wrote to family and friends, reported by ABC News on Friday, explains his decision to plead guilty and suggests the cause of the confusion was Gates’ own vacillations.

“[D]espite my initial desire to vigorously defend myself, I have had a change of heart,” Gates wrote, according to the report. “The reality of how long this legal process will likely take, the cost, and the circus-like atmosphere of an anticipated trial are too much. I will better serve my family moving forward by exiting this process.”

A Gates plea bargain turns up the heat on Manafort, since Gates will potentially provide incriminating evidence against Manafort or other members of the Trump campaign.

Mueller’s case against Gates and Manafort has focused on their work for Ukrainian President Viktor Yanukovych, an ally of Russian President Vladimir Putin who was deposed in a 2014 uprising, and his pro-Russian political party. Prosecutors have alleged the pair laundered—and evaded taxes on—more than $75 million they received for their Ukrainian consulting work. That focus has led Trump and his supporters to assert the case is unrelated to allegations that the Trump campaign coordinated with Russia during the 2016 election. In a statement Thursday responding to the new indictment, a Manafort spokesman, Jason Maloni, said his client is innocent and confident of acquittal. “The new allegations against Mr. Manafort, once again, have nothing to do with Russia and 2016 election interference/collusion,” Maloni said.

But the new indictment alleges that both Manafort and Gates engaged in tax evasion and bank fraud even as they worked for the Trump campaign. It charges that Manafort, while he was running the Trump campaign, carried out a scheme with Gates’ assistance in which he used funds parked in offshore accounts to buy real estate and other goods, then exaggerated the value of those properties and overstated his income to obtain bank loans. The indictment notes that Manafort in 2016 owed $300,000 on one credit card. This suggests he was desperate for cash.

With Manafort’s finances in increasingly precarious shape, he made indirect overtures to Russia. He maintained email contact with Konstantin Kilimnik, his longtime business associate in Ukraine. Kilimnik, who reportedly has ties to Russian intelligence, purported to pass messages between Manafort and Oleg Deripaska, a Russian aluminum magnate close to Putin.

Manafort, who previously worked for Deripaska, reportedly owed the oligarch millions of dollars. In an email to Kilimnik first reported by the Washington Post, Manafort suggested he hoped to use his prominent position on the Trump campaign to “get whole” with Deripaska. He also offered to privately brief the oligarch on the campaign. Shortly after the Republican convention in July 2016, Kilimnik sought an in-person meeting with Manafort to convey “several important messages” to Manafort from a person the men referred to cryptically but who appears to be Deripaska. The messages from this contact, Kilimnik said, related to the “future of his country.” Manafort and Kilimnik met on August 2, 2016, at the Grand Havana Club, a Manhattan cigar bar. Manafort and Kilimnik have denied the meeting involved coordination between the Trump campaign and Russia. Deripaska through a spokesman denies conveying messages through Kilimnik.

But Gates might have more information for prosecutors about what Manafort and Kilimnik discussed. On Tuesday, Alex van der Zwaan, a London-based attorney, pleaded guilty in federal district court in Washington to lying to investigators about contacts he had with Gates. Prosecutors revealed that Gates, in September 2016, put Van der Zwaan in touch with a longtime Manafort business associate in Ukraine. The person is not named in the indictment, but the description matches Kilimnik. This suggests Gates, like Manafort, maintained contact with Kilimnik during the presidential race.

Gates’ account of those contacts could help fill in what transpired between the Trump campaign and Russia. Gates’ cooperation will also put intense pressure on Manafort, who faces the prospect of decades in prison, to do the same. That is sure to worry Trump.