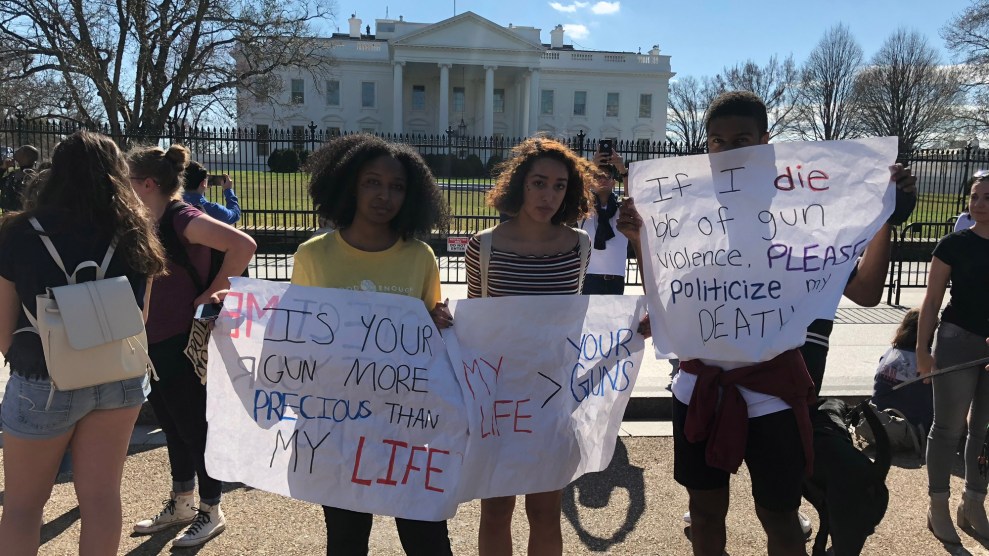 Busloads of teenagers arrived in Tallahassee overnight to continue their calls for gun control hundreds of miles from the site of a mass shooting that left 17 dead and 14 others injured at a Parkland, Fla. high school.

On Wednesday, students from Parkland traveled to the state Capitol to meet with lawmakers and rally for changes to the state’s lax gun laws a day after the Florida House rejected a motion along party lines to take up a bill to ban assault rifles. Despite the setback, some students remain optimistic.

Daniel Bishop, a student at Majory Stoneman Douglas High School, told the New York Times that he thinks the shooting at his school represents a different moment than previous school shootings. “Sandy Hook, they were elementary kids who couldn’t stand up for themselves,” Bishop said. “Virginia Tech was 2007, a different time. But this one, I just have a gut feeling—something is going to change.”

Over the next two weeks, the Republican-controlled legislature is expected to consider other proposals to bolster the state’s gun laws such as raising the minimum age to purchase an assault rifle to 21. Since the shooting last week, students have pressured lawmakers to act, led by members of “Never Again MSD,” a group of Stoneman Douglas students who say they will continue to call for expanded background checks and a ban on military-grade firearms. Florida Gov. Rick Scott is expected to meet with students at 5 p.m. today.

"I did not wait out an hour, fearing for my life, just to watch yesterday, the horror of an overwhelming vote against a life-saving bill," student says https://t.co/Nn2QjsRD5R pic.twitter.com/Sd5cqpli1L

"If we are going to protect our future, why are none of us protecting our children?" student says. "The AR-15 is a senseless weapon that by default can shoot out over 600 rounds. It does not take 600 rounds to stop an intruder in your home.” https://t.co/Nn2QjsRD5R pic.twitter.com/iZnLFv6UcQ

"We have had enough of thoughts and prayers. We have had enough of, we are in your consideration," student Delaney Tarr says. "We know that that is not true. If you supported us, you would've made a change long ago and you would be making change now.” https://t.co/Nn2QjsRD5R pic.twitter.com/TNkVzGGP1o

Alfonso Calderon, a Florida school shooting survivor: “Trust me, I understand. I was in a closet locked, for four hours…I understand what it’s like to text my parents, ‘goodbye, I might never ever get to see you again, I love you’” pic.twitter.com/UaooVSPNNA

Beyond Florida, teenagers have been marching across the country to advocate for stronger gun laws as part of a growing youth-led movement, nearly a week after the shooting in South Florida. High school students also rallied on Wednesday in Washington, DC chanting, “The NRA has got to go,” outside the White House. The day prior, a group of teenagers organized by Teens for Gun Reform was there to hold a “lie-in” with supporters.

On Tuesday, President Donald Trump instructed Justice Department officials to add regulations to ban bump stocks, devices used in the Las Vegas massacre to turn a semiautomatic weapon into an automatic one—a day after the president tweeted that he would be open to “strengthening background checks.” Nikolas Cruz, the 19-year-old suspect in the Parkland shooting, did not use bump stocks.

A huge crowd of teens exiting Union Station and heading to the Capitol to call for action on gun violence pic.twitter.com/5VVWGFTGij

At West Boca High School, hundreds of students walked out after a moment of silence and, despite calls from the school’s principal to return to school, marched 12 miles to Majory Stoneman Douglas High School with the aid of a police escort and volunteers who brought water.

These West Boca High School students left class and walked over 10 miles to the Parkland, Florida school where 17 people were killed.

My daughter, Marlee Mazor, at West Boca High. Her best friend was shot at Stoneman Douglas, she will recover. Leading a chant of “We Want Change!” at her high school before a walk out! They walked 12 miles to Douglas! #douglasstrong #neveragain #WeWantChange #msdstrong #enough! pic.twitter.com/To543n454r

WATCH: Students from Florida's West Boca High School have walked out of their classes, heading towards Marjory Stoneman Douglas High School, as part of a call-to-action by students in the area after the mass shooting last week that killed 17 people https://t.co/JoGj3r547e pic.twitter.com/yqeNwj9PVM

The demonstrations spread throughout the country, from Bakersfield, Calif., to Toms River, N.J., to Iowa City, Iowa, where more than 200 students left class to decry gun violence in front of the Old Capitol building. One rattled off the names of the deceased from the Parkland shooting. “We’re going to save not only our generation, Generation Z, but the generations after us,” Amanda Parsons, a student at West High School, told the Iowa Press Citizen. “We’re going to make the world a better place.”

Students in Iowa City, Iowa stage a walkout in protest against gun violence. “Not all of us can vote…not all of us do have that say, but we will eventually” #NeverAgain #BanMachineGuns pic.twitter.com/s6sFh97brj

“The NRA has got to go” pic.twitter.com/2mZZirwGUL

Students are now rolling up to the old Cap pic.twitter.com/VHTUchudXS

More walkouts are expected throughout the day, weeks before the first national walkout is planned for March 14. A second major march, known as March for Our Lives, is expected to take place in Washington, DC on March 24. In Chicago, students at several high schools said they planned to file out of school today to rally. “Our goal is not to stop students from walking out,” said Nathaniel Rouse, principal at Oak Park and River Forest High School, told faculty and staff. “They have a right to peacefully protest. Our goal is to ensure they are kept safe in the process.” Meanwhile, the head of Texas school district told parents in a letter that kids who decided to protest in the wake of the Florida shooting would face a three-day suspension, the Houston Chronicle reported. “Life is all about choices and every choice has a consequence whether it be positive or negative,” Curtis Rhodes, superintendent of the Needville Independent School District, wrote. “We will discipline no matter if it is one, 50, or 500 students involved.”