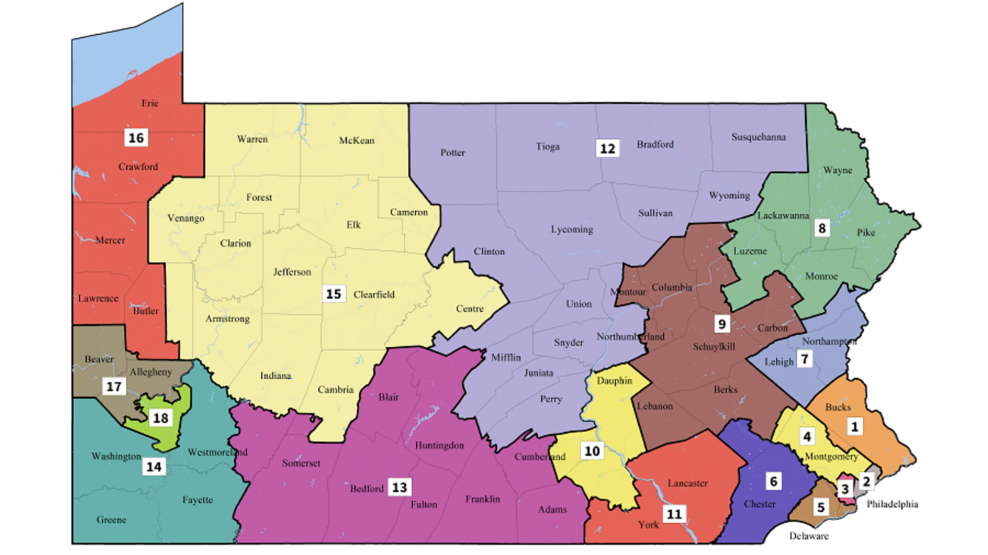 The Pennsylvania state supreme court adopted a new electoral map for the state on Monday that could help Democrats win several additional seats in Congress. The move attracted immediate opposition from state Republicans as well as President Donald Trump, who urged Republicans to challenge the new map at the US Supreme Court.

Last month, the state’s top court found that Pennsylvania’s congressional map, one of the most gerrymandered in the country, violated the state’s constitution. On Monday, the court implemented a map that it commissioned from a Stanford Law School gerrymandering expert, after the Republican-controlled legislature and Democratic governor failed to agree on a replacement map.

Hope Republicans in the Great State of Pennsylvania challenge the new “pushed” Congressional Map, all the way to the Supreme Court, if necessary. Your Original was correct! Don’t let the Dems take elections away from you so that they can raise taxes & waste money!

Since 2011, Republicans in Pennsylvania have consistently won 13 of the state’s 18 congressional seats, even though the state is split nearly evenly between Democrats and Republicans. The new court-imposed map comes closer to creating an even partisan balance. Trump received more votes than Hillary Clinton in 10 of the 18 new districts in 2016, but in a year that favors Democrats, the state would likely elect nine Democrats and nine Republicans to Congress.

Republicans plan to fight the new map in federal court. The Republican leaders in the state legislature who drew the old map, Senate President Pro Tempore Joe Scarnati and House Speaker Mike Turzai, intend to sue in federal court to block the new map from being implemented. They argue that the state supreme court does not have the power to overturn a map passed by the legislature. But Scarnati and Turzai already used that argument when they asked the US Supreme Court last month to block the state supreme court’s order, and they were unsuccessful. Justice Samuel Alito, a conservative, denied the appeal without even referring it to the other justices.

As election law expert Rick Hasen explained on his blog, Republicans have two options: Try again with Alito, who oversees appeals from Pennsylvania, or file a new federal case in district court. Both, Hasen concludes, are unlikely to succeed. The US Supreme Court, he predicts, is unlikely to change its mind, especially as primary elections draw near. A new federal case, he writes, would be a “super longshot” because federal courts generally decline to overturn state court decisions interpreting state constitutions. “[I]t is hard to see where Republicans go from here to successfully fight these maps,” he writes.

Still, Republicans, with the president’s support, appear willing to take their chances on a longshot, and intend to file a case this week.