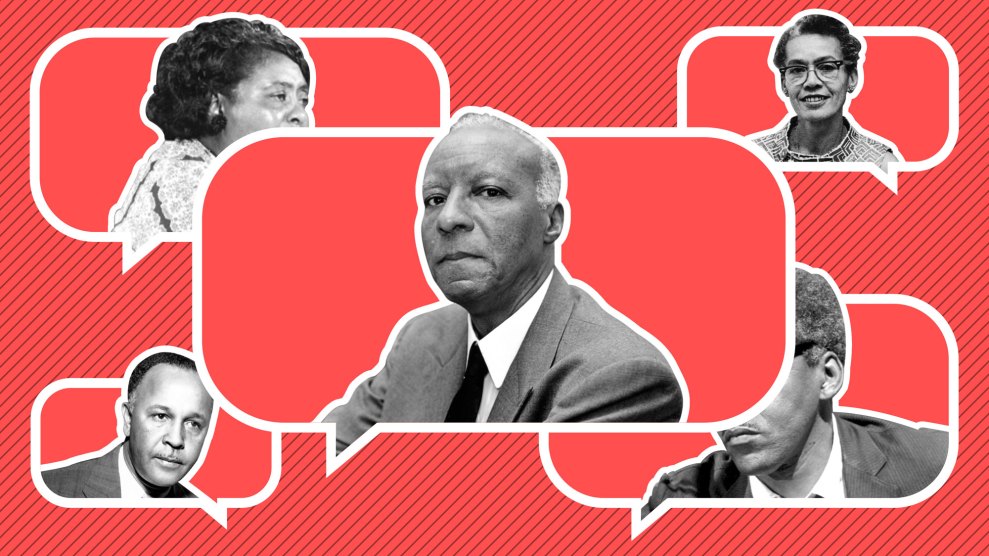 For Black History Month, we asked you about the figures you’ve been inspired by and to help us highlight important black Americans who have been left out our history books. One of our readers noted that “the list goes on forever” and named the civil rights activist Fannie Lou Hamer as someone under-appreciated in mainstream history.

Hamer became a leading civil rights activist in the deep south after getting involved with the Student Non-Violent Coordinating Committee and attempting to register to vote in 1962. She was blocked after failing a literacy test. These series of events also led to her being fired from her job and driven from her home—she lived on a plantation worked as a sharecropper. But Hamer didn’t give up, despite the hardships and threats to her life she retook the literacy test the following year and passed.

“First she liberated herself by registering to vote, and then she helped to liberate others by spreading that message and recruiting others to register to vote,” explains Carole Boston Weatherford, a New York Times bestselling author who writes about heroes and forgotten struggles for children. Her book Voice of Freedom: Fannie Lou Hamer: Spirit of the Civil Rights Movement, chronicles Hamer’s life through first-person poetry. Weatherford says Hamer’s story isn’t just black history, but American history, and teaching students about these historic figures is vital. “A book can show kids how other people live around the world, how others have struggled, and how others have overcome—and that helps them to develop empathy,” she explains.

Weatherford notes Hamer’s story—which includes continuing to fight for civil rights after being thrown in jail and beaten for sitting down at a lunch counter designated for white people and giving a speech that frightened President Lyndon B. Johnson—is that of an “unlikely hero” who demonstrates the “courage that we all can muster when we have a cause larger than ourselves.”

“I want kids, particularly children of color, to know that there are heroes and achievers who look like them…and if Fannie Lou Hamer can do what she did with an elementary school education, imagine what you can do with a high school diploma or a college degree, and more advantages than Fannie Lou Hamer could ever have dreamed of in her time,” Weatherford explains. But she worries children aren’t learning about figures like Hamer, and to her surprise and concern, during a book tour, she found out that many adults weren’t aware of the influential civil rights activist either. The children’s author tells Mother Jones that a change in her personal life is giving her a new sense of urgency about the work she does. “I’m expecting my first grandchild any day now, so I’m heavily invested in the issues I write about not just because I want to education kids in the classrooms, but because my next generation is on the way and we’ve got to do better.”

Patricia Bell-Scott, an author and professor of women’s studies at the University of Georgia, says she was similarly concerned when she realized how few people know about civil rights activist Pauli Murray after she wrote The Firebrand and the First Lady: Portrait of a Friendship: Pauli Murray, Eleanor Roosevelt, and the Struggle for Social Justice.

Bell-Scott explains Murray’s legal mind shaped some of the most important civil rights cases in the 20th century, and describes her as an “architect” of the Brown v. Board of Education decision. Murray’s final paper at Howard University School of Law argued segregation violated the Thirteenth and Fourteenth Amendments, after she made a bet with her teacher that Plessy v. Ferguson would be overturned within 25 years. That professor, Spottswood Robinson, worked with Thurgood Marshall, on the legal brief for Brown v. Board of Education, using the arguments Murray made in her paper. She also came up with the legal argument that women were protected under the 14th Amendment. Her writing formed the foundation of arguments on which Ruth Bader Ginsburg would successfully persuade the Supreme Court that women were a protected class under the Equal Protection Clause of the Constitution.

Murray also was arrested for refusing to move to the back of a bus 15 years before Rosa Parks and organized sit-ins in the nation’s capital 20 years before the Greensboro sit-ins.

Bell-Scott tells Mother Jones, Murray not only had a profound impact on history, but her personally. In the mid 1980s, Murray wrote a letter to the scholar. “This letter was a letter of encouragement about the work that I was doing,” Patricia-Bell recalls. “I was starting a new journal on black women, I was involved in a curriculum development project in women’s studies, and she, unbeknownst to me, was following that work. She sent me and my coworkers a letter of encouragement. In that letter, she said to me, you need to know the veterans on whose shoulders you stand.” That note compelled her to seek out Murray’s archives many years later and find the letters between the activist and First Lady Eleanor Roosevelt that led to her book.”Her life has just been an example in terms of her persistence of issues of social justice,” Bell-Scott says. “It has encouraged me to take my own work as a writer more seriously and to see it as a kind of activism.”

Bell-Scott explains one reason Murray may not get the attention she deserves in our history is because she was “woman-loving and gender non-conforming.” Homophobia also helps explains why the lead organizer of the March on Washington, a gay man named Bayard Rustin, who one of our readers flagged as an under-appreciated black figure from American History, isn’t part of our mainstream historical narrative.

As Nikki Lane, a professor who teaches about race and sexuality at universities in the Washington D.C. area explains, not telling these stories perpetuates “the illusion that African American people are and have always been heterosexual, which is unfortunate given the diversity of black people’s experiences.”

Lane says in addition to being pushed to the side in our historic narratives because of their sexuality, there are many people we’ll never know weren’t straight because they kept that part of their life private. She explains that the way our culture treats black people’s sexuality plays a major role in that. “African American people’s bodies have been used as the exemplar as what it means to be non heteronormative,” Lane explains further by pointing at the way black people’s bodies are depicted in mainstream culture, for instance how black women are often overly sexualized. She says black LGBT people “understand that our bodies are already treated as outside of the norm sexually.”

Telling these stories, she says “allows us to see these lies people have told about black people’s bodies are not true and…allows us to tell that richer and fuller story about black life in the United States.”

You can read more responses from our readers below. They have been lightly edited for length and clarity.

“There are a number of scholars that are based in the Bay area that do amazing work around all the common disciplines but focus on it from an African centered perspective. The folks that were most impactful for me over the years are the following, and they all deserve their due:

To answer the initial question though…. Assata Shakure’s story and hip-hop music are the genesis of me wanting to learn more about American history from a Afrocentric perspective. There are so many people and events that I am forgetting, per usual.” – Max Gerhardt, 29, Oakland, California

“My story is not about a big historical figure but rather two African-American co-workers from when I began my working life with the federal government in 1974: Ms. Avis Henderson and Ms. Frankie Green. I was a young girl from the white suburbs of Chicago with a newly minted college degree. Ms. Henderson was my supervisor, and I will never forget when she taught HER boss some manners. She was speaking about work with me and at least one other person when her boss, a white man, approached and interrupted. She turned to him and calmly said, “I’m talking to my staff and I will come talk to you when I am finished.” That taught me a lot about a manager who respected the people who worked for her. I related that story time and again throughout my career as an example of a great manager. Once I got older, I realized that she, a black woman, might have been taking a big risk talking to a white manager like that. Ms. Frankie Green, whose face I can still see today, was my first real African-American friend, even though I was 23 and she was in her 50s. She was a wonderful human being, and I enjoyed her company so much.”– Mary O’Brien, 66, Santa Rosa, California

“My contribution would be Henry Ossian Flipper. According to Wikipedia, ‘Henry Ossian Flipper (March 21, 1856 – April 26, 1940) was an American soldier, former slave, and the first African American to graduate from the United States Military Academy at West Point in 1877, earning a commission as a 2nd lieutenant in the US Army…Eventually, he was court-martialed and dismissed from the US Army.’

I used to write about Kern County History for a local newspaper. I was always looking for interesting stories to write about. Flipper was court-martialed by Col. William Rufus Shafter, who later commanded the U.S. Army during the Spanish American War, and then retired to Kern County, California. The town of Shafter, California bears his name, another town, McKittrick, California, is named after one of his friends, Capt. William McKittrick. So Flipper has a Kern County connection and would have made for an interesting Black History Month column. I’ve never written about Flipper, but I have always been impressed by his courage and dignity despite his probably unjust dismissal from the U.S. Army.” – Jamie Jacks, 63, Bakersfield, California

“I would like you to acknowledge the accomplishments of Percy Julian a PHD chemist accredited with the discovery of industrial large-scale chemical synthesis of the human hormones progesterone and testosterone from plant sterols such as stigmasterol and sitosterol.

He could not work at the major chemical companies at the time because of being born black.

He later started his own company to synthesize steroid intermediates from the wild Mexican yam. His work helped greatly reduce the cost of steroid intermediates to large multinational pharmaceutical companies, helping to significantly expand the use of several important drugs.” – Anonymous