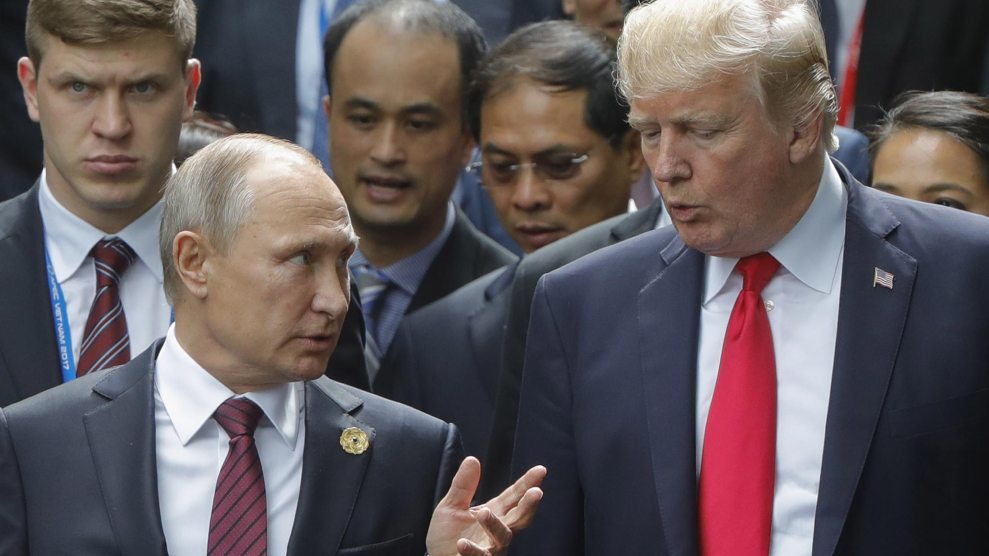 The Trump administration announced a new round of sanctions targeting Russian entities and individuals on Thursday.

The Treasury Department unveiled new sanctions against five entities and 19 individuals. Most of the people have ties to the Internet Research Agency, the “troll farm” that was indicted last month by Special Counsel Robert Mueller as part of his investigation into Russian interference in the 2016 elections. Thirteen of the IRA-linked individuals on Treasury’s list were indicted by Mueller, whose indictment described the IRA as the nexus of a large-scale Russian effort to influence the election via social media. The IRA itself is also on the sanctions list, as is Russia’s main intelligence agency and several individuals who work there. The sanctions will prevent the named entities from entering the US, and will freeze any assets they have on American soil.

“The Administration is confronting and countering malign Russian cyber activity, including their attempted interference in US elections, destructive cyber-attacks, and intrusions targeting critical infrastructure,” Treasury Secretary Steve Mnuchin said in a statement. “These targeted sanctions are a part of a broader effort to address the ongoing nefarious attacks emanating from Russia.”

Some of the measures announced Thursday were the result of a Russian sanctions bill which Trump begrudgingly signed into law last August after it nearly unanimously passed both houses of Congress.

That bill required the Trump administration to identify companies and individuals that do business with Russia’s defense and intelligence sectors by October, and impose sanctions on appropriate entities by the end of January 2018. The administration, however, missed both of these deadlines, meeting the first requirement almost a month late and only after public scolding by lawmakers.

With Thursday’s announcement, the administration appears to have finally met the January deadline, if a month and a half late. The State Department had previously denied that it had missed a deadline, offering a different interpretation of the law, which Congressional Democrats roundly rejected.

“I’m fed up waiting for this Administration to protect our country and our elections,” said Rep. Eliot Engel (D-N.Y.), the top Democrat on the House Foreign Affairs Committee, at the time.