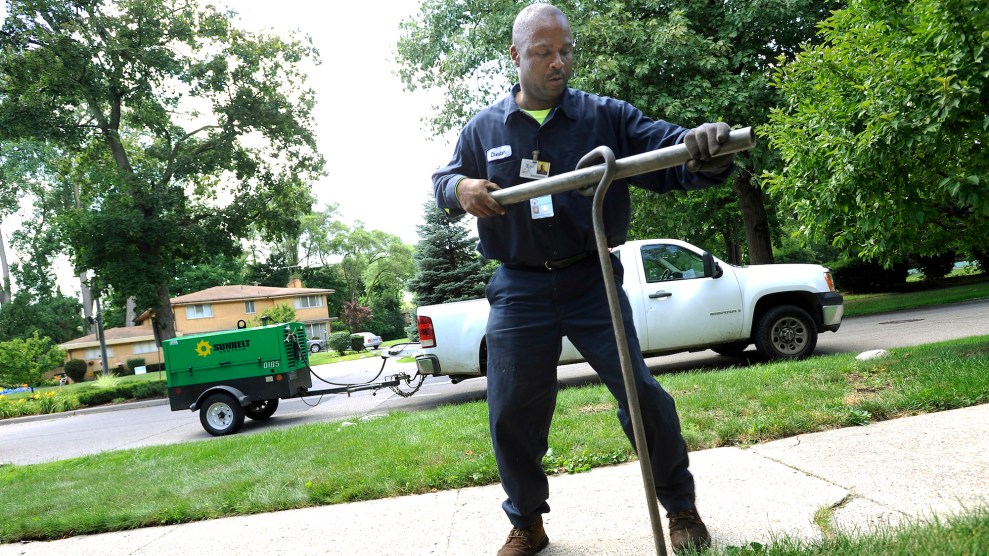 A water shut-off technician for the city of Detroit shuts off the water at a home in the city's Palmer Woods neighborhood in 2014.Elizabeth Conley/AP Photo/The Detroit News

In the next few weeks, Detroit is set to start shutting off water to thousands of residents with unpaid bills. Since the shutoffs began four years ago, tens of thousands of Detroiters have had their water cut off, drawing sharp criticism from local anti-poverty activists as well as the United Nations.

Households are slated for shutoff once their water bill is 60 days or $150 past due. While more than 17,000 households are at risk, Gary Brown, director of the Detroit Water and Sewage Department, told the Detroit Free Press that roughly 2,000 will actually be shut off as more residents enroll in repayment and assistance plans. The city’s Water Residential Assistance Program (WRAP), for instance, offers up to $1,000 a year to help customers catch up on their accounts.

According to Brown, the average home slated for shutoff this year is $663 past due, and most water connections are restored within 48 hours of being turned off. City records obtained by Bridge Magazine show that the number of yearly shutoffs went from 33,000 in 2014 to 17,500 last year. Overall, there have been more than 101,000 shutoffs in the past four years.

In late March, Mayor Mike Duggan’s office touted the $7 million that has been spent in the last two years to help Detroiters facing shutoffs. Just the week before, the city council approved a $7.8 million contract to Homrich Wrecking for conducting water shutoffs.

Advocates who work with the poor black and brown Detroiters who are most vulnerable to losing their water say the city’s financial assistance programs are inadequate. They are little more than “a marketing plan being framed as a compassionate solution,” says Monica Lewis Patrick, president and CEO of We the People of Detroit, a grassroots group fighting the water shutoffs. Many Detroiters who enroll in payment plans are at risk of falling back into cycles of nonpayment, says Mark Fancher, staff attorney for the Racial Justice Project of the ACLU of Michigan. “Not because they’re lazy or just choosing to be poor,” but because “there are a whole lot of reasons why people are poor and there are lots of poor people in Detroit.”

“You can’t convince me that while you’re smiling at me and shutting my water off that this is good for me and you represent my interests.”

Brown told the Free Press that the tricky part of conducting shutoffs is “separating the truly needy from those who are just not paying.” That line of thinking, says Fancher, presumes that those who aren’t paying are “deadbeats that have the money, but have chosen not to pay. This is completely contrary to the reality of most people who are dealing with these shutoffs.”

In a city that’s 80 percent black, more than 35 percent of residents live in poverty, the highest rate among the nation’s 20 largest cities. Unemployment hovers around 9 percent and the median income is around $28,000. Yet water rates have climbed as much as 400 percent in the last 20 years.

Large-scale water shutoffs began in 2014, just as the city was crawling out from the wreckage of the country’s largest-ever municipal bankruptcy, pegged at $18 billion. The shutoffs have been advertised as an unavoidable, if painful, treatment for restoring the city’s fiscal health. In 2014, the office of then-Emergency Manager Kevin Orr referred to the shutoffs as “a necessary part of Detroit’s restructuring.” Patrick isn’t buying it: “You can’t convince me that while you’re smiling at me and shutting my water off that this is good for me and you represent my interests. As my grandmother would say, ‘You can’t piss on me and tell me it’s raining.’”

In 2014, two United Nations special rapporteurs declared the shutoff policy a “violation of the most basic human rights.” “I heard testimonies from poor African American residents of Detroit who were forced to make impossible choices—to pay the water bill or to pay their rent,” Catarina de Albuquerque, the special rapporteur on the human right to water and sanitation, said after visiting the city. Among the findings she recounted:

Ms. de Albuquerque cited the case of a woman whose water had been cut and whose teenage daughters had to wash themselves with a bottle of water during menstruation. In other instances, she continued, she heard mothers who feared losing their children because their water was shut off; heads of household who feared losing access to water without any prior notice; others who feared receiving unaffordable and arbitrary water bills.

Activists and researchers have pointed out that the Detroit Water and Sewage Department’s financial woes can’t be blamed entirely on the city, since it stretches far beyond the city itself, serving 40 percent of Michigan’s population. The progressive think tank Demos has described the decision to include the department’s $6 billon debt in the city’s bankruptcy filing as an accounting trick used to negotiate more favorable terms with lenders.

We the People of Detroit and other grassroots groups have been organizing to not only stop the shutoffs, but make water more affordable. Cities like Philadelphia are experimenting with tying residents’ water bills to their incomes to ensure that families don’t become trapped in a cycle of missed payments. We the People recommends that no family living at or below 200 percent of the federal poverty line ($25,100 for a family of four) pays more than roughly 3 percent of their income for water, the rate considered affordable under UN guidelines. (The Environmental Protection Agency pegs affordability at 4.5 percent of median household income.) In 2017, Michigan State University researchers found that the median household spends about $1,620 on water bills annually, roughly 6.5 percent of a poverty-line income. More alarmingly, they found that by 2022, water rates would climb to unaffordable levels for 35 percent of households nationally.

However, the city has refused to alter water rates, insisting that its hands are tied by a state constitutional amendment that requires new taxes to be approved by voters. An affordability fee, Fancher argues, would not legally be a tax. The constitutional argument, he says, has been “a convenient excuse for not doing something that makes a whole lot of sense.”

Some water rights activists see the city’s intransigence as more evidence of a quiet campaign to push poor people of color out of the city. In a recent study, We the People found that many home foreclosures concentrated in Detroit’s black communities were driven in part by overdue water bills. “It’s about using water to displace residents in order bring in a younger, whiter population to dilute black political power in Detroit,” Patrick says. They are “weaponizing water as a tool of gentrification.”