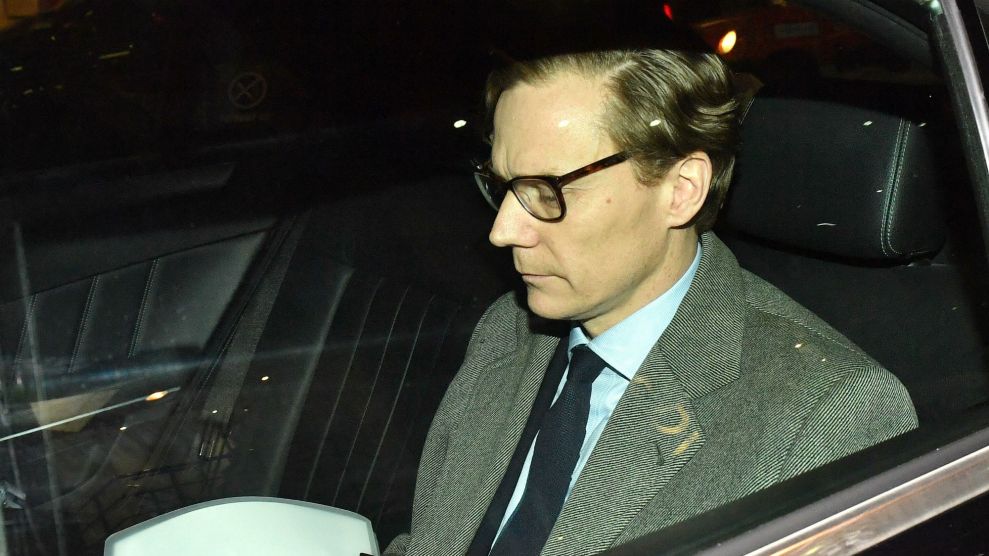 A Moldovan-born American academic named Dr. Aleksandr Kogan made a defiant appearance before the UK Parliament last week to accuse Facebook of using him as a scapegoat in the scandal surrounding the pro-Trump data firm Cambridge Analytica. It was Kogan who in 2014 harvested data from tens of millions of Facebook users and supplied that information to Cambridge Analytica in order to build its supposedly vaunted models that targeted millions of Americans during the last presidential election. Facebook has said Kogan committed a “scam” and “fraud,” and the platform has suspended his account. Kogan, for his part, recently told 60 Minutes that he “never heard a word” from Facebook while also apologizing for his role in obtaining users’ data.

But the most noteworthy piece of news to come out Kogan’s recent appearances wasn’t anything he actually said. It was Cambridge Analytica’s response.

The embattled company fired back at Kogan with a lengthy statement and a press conference using a novel line of defense: Kogan’s data, Cambridge says, was useless. The firm claims it used “conventional” and “standard off-the-shelf” data modeling—the typical mix of demographic, consumer, and voting information—when it worked for the 2016 presidential campaigns of Ted Cruz and Donald Trump. Despite previous boasts about how its “revolutionary approach” played an “integral” role in influencing US voters and electing Trump, Cambridge now wants you to believe it wasn’t all that special. This is a pretty stunning line of defense.

The focal point of Cambridge’s pitch to prospective political clients and investors—like the alt-right-backing Mercer family—has long been that it would combine big data and social psychology to win the hearts and minds of voters. Think of it this way: The average political consultant mostly uses demographic (race, income, geography), consumer (shopping history, magazine subscriptions), and voting data to target voters. Cambridge, however, said it would take all that traditional data and combine it with psychological research and “cutting-edge data science” to organize US voters by personality traits—whether they were leaders or followers, outgoing or introverted, resistant to change or embracing of it. Cambridge would then target those people with ads and other methods of persuasion specifically tailored to their personalities.

“Your behavior is driven by your personality and actually the more you can understand about people’s personality as psychological drivers, the more you can actually start to really tap in to why and how they make their decisions,” Alexander Nix, Cambridge’s then-CEO, told Bloomberg in 2015. “We call this behavioral microtargeting and this is really our secret sauce, if you like. This is what we’re bringing to America.”

When Cambridge got up and running in 2013 and 2014, however, it didn’t have much of a clue about how to actually do this. According to Chris Wylie, the former contractor for Cambridge who in March blew the whistle on the firm’s practices, Cambridge eventually enlisted Kogan, then working at the University of Cambridge, to make its big-data-fueled vision a reality. “Facebook data and the acquisition (of it), using Aleksandr Kogan’s app, was the foundational dataset of the company,” Wylie told Parliament in March. “That is how the algorithms were developed.”

But now, Cambridge says Kogan’s data wasn’t any good. The firm says it tested the personality models created with Kogan’s data against conventional advertising models “by comparing the number of clicks for every dollar spent.” Those tests showed the personality-based ads were less effective than “standard off-the-shelf demographic” data.

This is puzzling for several reasons. According to a former staffer for the Cruz campaign, which was Cambridge’s marquee political client until he dropped out of the presidential race, the company pitched Cruz on having voter models built atop Facebook data. But Cambridge, the staffer said, refused to give the campaign access to the underlying personality information used to build those models or to let Cruz staffers conduct randomized controlled trials to test the personality models. At any rate, if Cambridge’s personality data for Cruz was faulty, the company never bothered to tell the Cruz campaign. Rather, it charged the Cruz operation a premium for its supposedly cutting-edge data and targeting.

Cambridge also says in its statement that it used a clicks-per-dollar approach to test Kogan’s data. But counting how many times someone clicks on an ad doesn’t tell you anything useful about whether you’ve persuaded that person to, say, support Ted Cruz. “Cost-per-click analysis does not represent a viable method to measure the persuasion effect of an ad campaign or the underlying data,” says Mark Jablonowski, a partner and chief technology officer of DSPolitical, a technology consulting firm in Washington, DC. In this case, Cambridge’s defense—our tests showed the data wasn’t any good, so don’t criticize us—raises more questions than it answers. (A spokesman for Cambridge wrote in an email that “click-through rates and cost-per-click are rough metrics that are commonly used, however we also use more nuanced techniques” to measure persuasion.)

It gets more baffling. Cambridge goes on to say in its statement:

As a consequence, instead of using such personality-based targeting on the Ted Cruz campaign in 2015, Cambridge Analytica provided more conventional data modeling for donors, persuasion, and turnout.

The claim that Cambridge did not use personality-based targeting for Cruz just doesn’t make sense. I’ve read internal Cambridge Analytica documents that placed Republican voters into personality groupings—”timid traditionalists,” “relaxed leaders,” and so on—and advised the Cruz campaign on how to influence those voters based on their personality traits. I’ve seen the online ads and physical mailers produced for the Cruz campaign in 2015 that a former Cruz staffer says resulted from Cambridge’s personality models and psychological research. “No idea how they can say ‘instead of’ here,” the former staffer told me. “We used the personality shit in the first four states.”

What’s more, Cambridge’s latest comments contradict practically everything Cambridge and Nix have ever said about what Cambridge did for Cruz. (Nix stepped aside as CEO in March after undercover footage by the UK’s Channel 4 News showed him musing about entrapping a potential client’s political opponent and sending hypothetical “very beautiful” Ukrainian women to a politician’s home, among other boasts.)

Before the scandal broke, Nix couldn’t say enough about how Cambridge’s mind-bending tactics boosted Cruz. In a Fox News appearance that credited Cambridge with playing a decisive role in Cruz’s 2016 Iowa caucus victory, Nix touted his firm’s data on the “core personality traits” of voters that “allows us to really understand people’s underlying drivers.” In September 2016, after Cruz had finished second to Trump in the nomination fight, Nix appeared at a conference in New York City where he said that psychographics and Cambridge’s “behavioral insights” informed almost every facet of the campaign’s operations. In Nix’s telling, Cambridge’s psychological tactics helped elevate Cruz from an also-ran candidate to “the only credible threat to the phenomenon Donald Trump.”

In response to questions from Mother Jones, a Cambridge spokesman claimed that “there is no discrepancy” between its recent statements and Nix’s previous comments. The spokesman did not respond to follow-up questions seeking clarification. (It’s worth noting that Cambridge spokesman Clarence Mitchell last week repeatedly declined to defend or speak on behalf of Nix. Mitchell said Nix was still suspended from the company.)

Looming over each new development in the Cambridge Analytica saga is a larger question: Did the firm do what it claimed, or was it more salesmanship and bravado than actual substance? The consensus among American political operatives I’ve spoken with points to the latter. “Bullshit,” “political malpractice,” and “internal Ponzi scheme” were responses I heard when I interviewed operatives who’d worked with Cambridge. Even Brad Parscale, Trump’s 2016 digital director and the campaign manager of the president’s 2020 bid, scoffed at Cambridge’s tactics: “I just don’t think it works.” The confusion now surrounding what Cambridge did—and didn’t do—during the 2016 campaign adds to the pile of evidence suggesting the company wasn’t what it claimed to be.