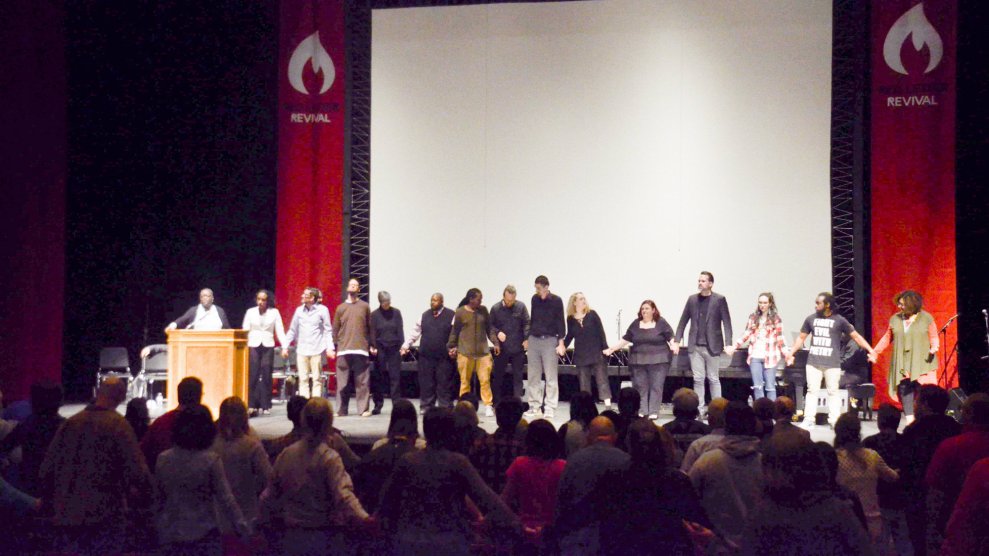 Say the word “evangelical,” and images of diversity or progressive politics are not likely to come to mind. But at the E.C. Glass High School auditorium in Lynchburg, Virginia, that’s exactly what was on display in April at the first Red Letter revival. A mix of pop and contemporary Christian music plays from the speakers as trendy young people, white-haired couples, and black, white, biracial, and Latino evangelicals greet friends and find their seats for the first day of a weekend-long religious revival.

The Red Letter Christians are an organization that intends to offer evangelical Christians an alternative to the old, white, predominantly male, and politically conservative evangelicalism that they believe has led the movement to lose its way. A great political and generational divide has driven a wedge in evangelical Christianity since Trump’s election. More than 80 percent of white evangelicals voted for him, causing many Christians, especially those who are young, to move away from even identifying themselves as evangelicals. Red Letter Christians are committed to combating racism, gun violence, and the death penalty while supporting immigrants and the LGBTQ community. They describe themselves on their website as “taking the words of Jesus seriously.”

“Young evangelicals love Jesus,” explains Shane Claiborne, one of the founders of the Red Letter Christians, “but they’re deeply grieved by white evangelicalism.” The willingness of the prominent leadership to do the bidding of Trump is “one more sign that the old guard evangelicals have really lost sight of what is actually important to evangelicals.” Instead, he believes, the evangelical movement should be organized around the question emblazoned on the T-shirts of the volunteers registering participants at the revival: “What If Jesus Actually Meant The Stuff He Said?”

Claiborne sits behind a podium at the revival chatting with other speakers. The Tennessee native is hard to miss: tall, almost gangly, very thin, in his early 40s, dressed as if he threw on some comfortable clothes that just happened to be there. Claiborne’s laugh is big and contagious, and sometimes it’s possible to make it out over he noise of the crowd. Soon, the lights dim, and preachers, poets, musicians, and writers take to the stage. They talk about LGBTQ rights, feeding the hungry, caring for immigrants, being responsible for poor people, and the state of politics. The crowd becomes more and more engaged, shouting “Amen” and cheering their approval.

After another prayer, Micah Bournes, a poet and hip-hop artist from Long Beach, California, who describes himself on his website as “a creative man of faith” who “often speaks and teaches on creative writing, pursuing justice, and the way of Jesus,” makes his way to the center of the stage. Tall with a neatly-trimmed beard, he reads a powerful poem about militarism and violence while holding the Bible. “Live by the sword, die by the sword,” he says, alluding to the Gospel of Matthew. “Say you want peace, but forever make war.” At these words, Claiborne jumps out of his seat and pumps his fist in the air.

Claiborne is an author and one of the public faces of a new, young, progressive evangelical movement. He and his wife live in a religious community in North Philadelphia called the “Simple Way,” where believers live, eat, and pray together while partnering with a local food bank and helping neighbors in need. He has written more than a dozen books; his most recent one is Still Evangelical?, a collection of essays by Christians that takes a look at the state of the evangelical movement during the age of Trump. But Claiborne, who grew up in Maryville, Tennessee, in a religious family, attended Eastern University near Philadelphia, and majored in sociology and youth ministry, is mostly on the road, speaking at college campuses and other religious events. He has also traveled to several countries, including India and Iraq, to pray with the poor.

“The places that following Jesus has led Shane are not exactly the comfortable suburban environs that many evangelical Christians inhabit today,” Jim Wallis, the founder and editor of the Sojourners, another organization and publication that focuses on peace and social justice, wrote in the foreword to Claiborne’s 2006 book, Irresistible Revolution: Living as an Ordinary Radical. “Worst of all, his notions of fidelity to the gospel seem to directly counter the political loyalties that many conservative on the religious right have made into an almost doctrinal litmus test of faith.”

“His notions of fidelity to the gospel seem to directly counter the political loyalties that many conservative on the religious right have made into an almost doctrinal litmus test of faith.”

Claiborne’s version of evangelical Christianity is at odds with the type at Liberty University, which flourishes just a few miles away from the E.C. Glass High School. With 110,000 students, it’s the largest evangelical Christian university in the United States and was founded in 1971 by the Rev. Jerry Falwell, who has a parkway named after him in town. Today, his son Jerry Falwell, Jr. is president of the university and one of Trump’s biggest supporters. Not letting allegations of sexual abuse and infidelity dampen his enthusiasm, Falwell told Fox News last year, “I think evangelicals have found their dream president.”

Choosing to hold the revival in Falwell’s backyard was no accident. Last year, after a bill to defeat Obamacare failed in the Senate, Falwell tweeted his disappointment in the three Republican senators whose votes ensured that it didn’t pass.

How do Sens Collins, Murkowski, McCain and other RINOs sleep at night running as Repubs only to deceive their conservative constituents?

Honestly I've wondered how you sleep at night. Would you have a public conversation with me about whether or not Jesus would support Trump? https://t.co/2eF2YgWqP2

Falwell ignored Claiborne’s request, so the Red Letter Christians decided to hold a religious revival in Lynchburg and planned to hold prayer meetings on campus with students, faculty, and anyone who wanted to join. Falwell’s adulation of the twice-divorced, foul-mouthed millionaire during the campaign made some students on campus uneasy with Liberty’s embrace of Trump.  “I made our intentions very clear,” Claiborne explains. This was by no means going to be a protest. They simply wanted to pray—something Liberty students do regularly.

But a few days before the revival was set to begin in April, Claiborne received a letter from the Liberty University Police Department informing him that he was barred from setting foot on campus or in the Thomas Road Baptist Church. If he did, he would be fined or arrested. “I’ve been arrested plenty of times in direct actions and protests and such,” Claiborne says. “I’ve been banned from places, but I’ve never been banned from a church.”

The rejection by Liberty University is unusual for Claiborne. On Christian college campuses all over the country, “he’s basically a rock star,” says Randall Balmer, a religious historian from Dartmouth and a member of Red Letter Christians.

The group was founded in 2007 by Tony Campolo—a writer, sociologist, and minister to President Bill Clinton—and Claiborne. During an interview between Sojourners‘ Wallis and a country music DJ, the DJ said he had read some of the Bible, and while he didn’t always like what it said, he always agreed with the words in red. Some Bibles often print the words of Jesus in red, and the DJ thought a good name for the group would be “Red Letter Christians.” His suggestion stuck.

At the revival, after hearing from a gay pastor and a Native American woman, Claiborne takes the spotlight and tells a story. Before leaving Philadelphia to head to Lynchburg, a journalist asked him, “What are you all going down there to protest?” Claiborne replied, “We’re not going to protest, we’re going to pro-testify!” he exclaimed with the soaring delivery of a pastor getting fired up during a sermon. “We’re going to proclaim Jesus!” The crowd explodes in applause and “Amens.”

Claiborne stressed that evangelicals with a megaphone aren’t the best representation of Christianity. “Some of the loudest voices haven’t been the most beautiful,” he says. He could be referring to Robert Jeffress, the pastor of First Dallas Baptist, a Southern Baptist megachurch and perhaps one of Trump’s most ardent clergy supporters who has always managed to find a way to explain away the misbehavior of the Commander-in-Chief. On the allegations that he had an affair with Stormy Daniels, an adult actress, Jeffress said “we are all sinners.” To that, Claiborne responds, “The Bible doesn’t say much about homosexuality,” about which Jeffress is outspokenly hostile, “but it does talk about divorce and infidelity.”

When Trump called Haiti and African countries shitholes, Jeffress said the only issue was the vocabulary he used to describe immigrants. And when the infamous tape of Trump describing sexually assault women was released before the election, Jeffress said the comments were indefensible…but he’d be voting for Trump anyway. “The 2016 election revealed the moral bankruptcy of the white evangelical movement,” Balmer says. In fact, he explains, historically, evangelical Christians supported women’s rights and workers’ rights and were some of the country’s leading abolitionists.  But then it went off the rails.

After the revival, Claiborne talks about the future of the evangelical movement. “The old guard is fading out,” Claiborne says. “White churches are hemorrhaging and struggling. But the church is flourishing in ethnic communities and immigrant communities.”  But he doesn’t need to waste time in battles over the soul of the evangelical movement. “We want to stay focused on Jesus and want to stay focused on justice,” he says.  What’s important to him is what was important to Jesus in the Bible when he reached out to help the poor, the sick, and the marginalized. “We’ve used our faith as our ticket to heaven,” he says, as opposed to using faith to help others. “We’ve promised people life after death when people are asking if there is life before death.”