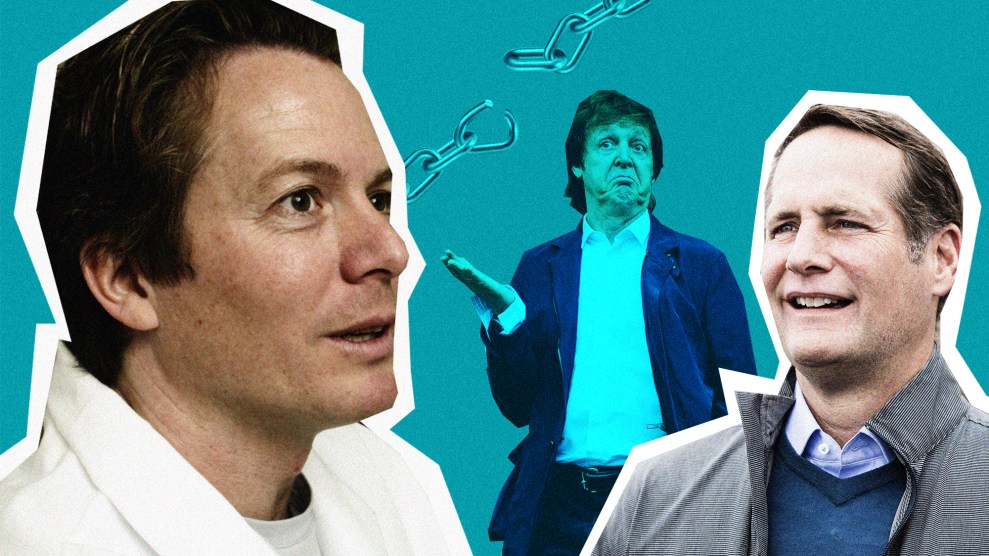 The race for veteran Republican Rep. Dana Rohrabacher’s Southern California seat is getting nastier as the June 5 primary nears. There’s already bad blood between the two Democratic frontrunners, Hans Keirstead, a stem cell researcher who landed the California Democratic Party’s endorsement in February, and Harley Rouda, a businessman who recently got the backing of the Democratic Congressional Campaign Committee (DCCC). The two have been publicly attacking each other for months, and Keirstead says he believes his opponent is behind a “whisper campaign” that’s dogged his campaign since late last year.

Those whispers suddenly got louder last week when the politics blog Down with Tyranny published a two-page selection from an anonymous whistleblower complaint filed against Keirstead at the University of California, Irvine in 2009. It accused Keirstead of having affairs with members of his staff and graduate students when he was an associate professor of anatomy and neurobiology and codirector of UCI’s stem cell research center. The complaint also alleged that on a night in 2008, Keirstead punched one of his female students “in the face with such force that both she and another woman…were knocked to the ground.” Keirstead was eventually cleared of any wrongdoing.

A closer read of the entire 14-page complaint, along with related court documents, reveals a bizarre story that involves a $6 million lawsuit, a piece of rock’n’roll art, a fictional prison escape, music legend Paul McCartney, and a man with a serious grudge against Keirstead.

It’s unclear who dropped the oppo research at the center of this saga. Keirstead says Rouda’s campaign has been circulating the UCI complaint behind the scenes for months. Rouda’s campaign manager, Michael McLaughlin, denies this. “Hans should be more concerned about explaining his negligent behavior to voters and less concerned about who found out first about his questionable past,” he says. Down with Tyranny blogger Howie Klein claims to have received the document from someone inside the DCCC. Yet Meredith Kelly, the DCCC’s communications director, says, “No one at the DCCC gave Howie Klein that document.”

The document’s appearance three weeks before the primary highlights the stakes in this race. California’s 48th district, located Orange County, is one of seven battleground seats in California Democrats need to flip if they are going to take back the House in November. The party already faces a disadvantage in the traditionally conservative district, and it’s also vulnerable to California’s nonpartisan “jungle primary,” which moves the top two vote-getters onto the November ballot. There are 12 candidates actively campaigning in the race, including five Democrats. If they split the Democratic vote without a clear winner, they could send Rohrabacher and his Republican challenger, Scott Baugh, to the general election.

A woman involved in what Keirstead calls an episode of “drunken stupidity” now works for his campaign.

The anonymous whistleblower complaint filed with UCI in July 2009 alleged that Keirstead had engaged in inappropriate relationships with members of his staff and graduate students at his stem cell lab. It also claimed that Keirstead had rented a vodka-stocked limo for his graduate students and staff to go to a concert in Los Angeles in July 2008. That night, two women—his current and former “mistresses,” according to the whistleblower—got into “a fist fight” outside a night club before Keirstead allegedly ended the brawl with a punch.

The allegations sparked an investigation by Janis Wallace, a senior investigator at UCI’s Office of Equal Opportunity and Diversity. In September 2009, she found all of the allegations against Keirstead to be “unfounded” and “lacking in evidence.” She noted that the then-unnamed whistleblower admitted that he had “no first-hand knowledge of [the] events” he had detailed in his complaint.

UCI officially exonerated Keirstead. Yet some people interviewed by the investigator described an atmosphere in Keirstead’s lab in which rumors ran rampant and one student accused another of “fucking the boss.” However, no one said they had witnessed any inappropriate behavior between Keirstead and his students or staff. Several people referred to him as a “rock star,” and that his lab could be “a cesspool for rumors.”

Keirstead, who denied the whistleblower’s allegations, described his lab’s atmosphere as a “tight fun team,” but acknowledged some “cliquish” behavior. He confirmed that two of his students got in a fight during a social trip to Los Angeles. He said that when he tried to split them up, one tried to punch him in the face and he caught the swing with his arms in self-defense. He chalked up the incident to “drunken stupidity.” Other people who were present backed up Keirstead’s account or claimed to have not to have witnessed the fight.

The woman whom Keirstead allegedly hit told the investigator that Keirstead had pushed her and said, “Do you have a problem?” Thinking he was “playing,” she replied, “yeah,” and pushed him back. According to the report, she said that Keirstead then “shoved her back and she was hit in the face, possibly with his fist.”

Asked now why this woman would make such a claim if it hadn’t happened, Keirstead responds, “I was shocked at seeing that and I don’t know why she would have said that. In no way shape or form did I hit that person.” He adds that this student continued to work in his lab for years and is currently assisting with his campaign. Yet Keirstead says the woman will not speak about the incident. “I wish she would, but she won’t,” he says.

It eventually came out that the author of the whistleblower complaint was a businessman named Keith Roizman, who’d had a dramatic falling out with Keirstead in 2009. Roizman, the former president of a company called Ziraffa Inc., had attempted to claim a proprietary interest in some of Keirstead’s scientific developments, but was rebuffed by the university. He submitted a complaint with UCI accusing Keirstead of conflicts of interest, misappropriating funds, accepting an illegal kickback, and receiving funding “under false pretenses.” The university launched an investigation and found Roizman’s claims “unfounded.” (Roizman could not be reached for comment.)

Around the same time, Roizman sent Keirstead a draft complaint of a lawsuit that accused him of fraud and breach of contract stemming from an unrelated business deal involving an artwork made by Keirstead’s brother. Roizman, Keirstead later said in a deposition, would go on to make several “threats of lawsuits and defamation” against him. Three days after UCI cleared Keirstead of the allegations of improper behavior with his students and staff, Roizman left a message on a former business partner’s answering machine, saying, “What I did with Keirstead is near child’s play, and I’m not letting up on Keirstead one fucking bit. You have no idea.” (A transcript of the message was submitted as evidence in the lawsuit.)

Roizman claimed that Keirstead told him the original drawing sold to Paul McCartney for “millions of dollars.”

Keirstead and Roizman had once been friends. According to Keirstead and court documents, the two met in October 2007 when he was in the early stages of researching a retinal technology that he hoped would help restore vision in people with impaired sight. Roizman, who has a degenerative eye disease, helped raise funds for Keirstead’s research, resulting a $1 million annual grant from a philanthropic foundation. The men began seeing each other socially, and at one point, Roizman saw a copy of “The Jam 1,” a pen-and-ink portrait of dozens of classic rock musicians by Keirstead’s brother Michael. They drafted an agreement giving Roizman’s company, Ziraffa, exclusive rights to market and sell the image outside of Canada.

Things started to fall apart when Roizman asked Keirstead to patent the retinal technology and then license the patent to him so he could build a company based on the innovation. “I told him, ‘I’m sorry, but there is no patent and it is not patentable,’” Keirstead says. “Keith became very disgruntled and threatened that if I didn’t patent it and license it to him for his company. He was desperate. He became ugly.”

In 2011, Roizman sued Keirstead, accusing him of “false promises,” “intentional misrepresentations,” and “intent to defraud and deceive,” among other charges related to the “Jam 1” print. He sought more than $6 million in damages and expenses, claiming that Keirstead had told him the original drawing had sold to Paul McCartney for “millions of dollars.” “Not only did Sir Paul McCartney not pay millions of dollars for the original Jam 1 drawing, he never purchased it at all,” Roizman’s lawsuit stated. In court filings, Keirstead claimed he had never said McCartney purchased the original drawing. (McCartney did not respond to a request for comment.)

Roizman’s suit also alleged that Keirstead’s brother was a “convicted violent felon” and had participated in a prison escape attempt that left a guard dead. Keirstead’s filings lambasted Roizman for misrepresenting his brother’s criminal record. “My brother stole a six-pack of beer when he was 17 and went to a juvenile detention center for three months—that’s it,” he says.

In a mediation brief, Keirstead’s lawyers detailed Roizman’s lengthy “smear campaign” to peg Keirstead as “a drug and woman abuser” because he had been shut out of Keirstead’s research. One deposition in the case was closed after Keirstead answered a question about Roizman’s threats and Roizman muttered, “What a fucking liar.”

In court, Keirstead’s legal team played recordings from messages left by Roizman on his former business partner’s phone, telling him he was implicated in the “charges I’m filing against Keirstead and UCI.” He declared: “I am now ratcheting this up to a level that there will be no way out of it…I’m taking you all fucking down.” In 2013, the lawsuit was thrown out.

While the university found no misbehavior by Keirstead and the lawsuit mostly revealed his falling out with Roizman, their disclosure hints that more dirt may be dug up in the final weeks before the closely-watched primary. Is there is anything else that might come to light that Keirstead would like to address now? “Frankly, it’s a whisper campaign, and now it’s bubbling up because we’re getting so close,” he says. “And to be clear with you: No. I have never had any Me Too-type offense in my life.”