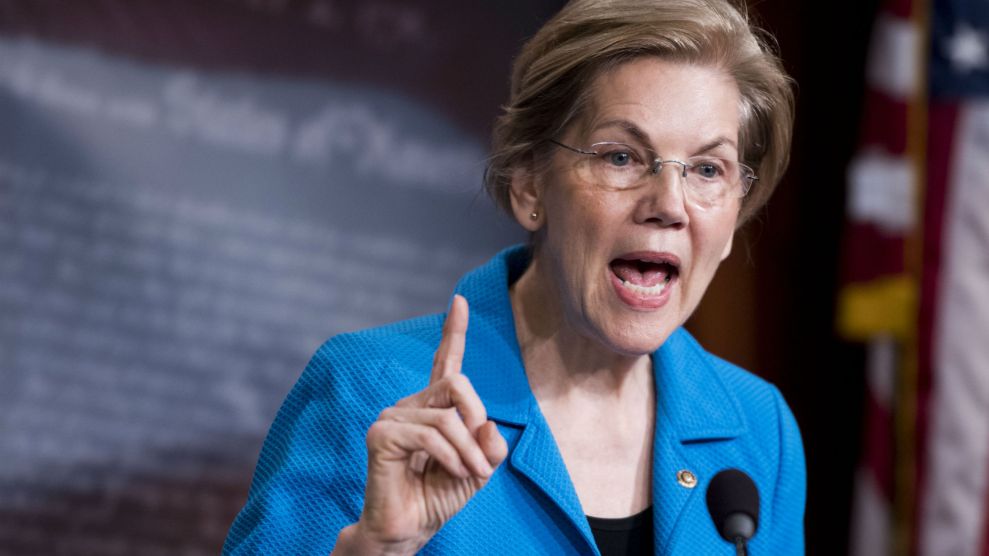 Sen. Elizabeth Warren (D-Mass.) had harsh words on Thursday for Kathy Kraninger, Trump’s nominee to lead the primary federal agency tasked to be a watchdog for consumers against Wall Street excess. Ever since Warren proposed the Consumer Financial Protection Bureau and helped create that agency following the 2008 financial crisis, the Massachusetts senator has crusaded for its existence and independence, in the face of mounting Republican opposition.

So while questioning Kraninger—who has no consumer finance background—during a two and a half hour confirmation hearing Thursday, Warren did not mince words, as she and her Democratic colleagues on the Senate banking committee peppered Kraninger about her alleged involvement in the Trump administration’s family separations policy, the botched Hurricane Maria response in Puerto Rico, Kraninger’s management experience, and her lack of experience in the world of consumer protection.

Warren called Kraninger’s involvement in family separations “a moral stain that will follow you for the rest of your life.”

Kraninger has worked a long career in the federal government, much of it spent working on homeland security. Kraninger began working at the Department of Homeland Security after its creation in response to 9/11, and served on several homeland security appropriations subcommittees in Congress before joining the Trump administration’s Office of Management and Budget in March 2017 to serve as a program associate director—a senior position that involves managing policy implementation at a slew of government agencies. The Trump administration has touted this management background as Kraninger’s main qualification to head the Consumer Financial Protection Bureau.

But during Thursday’s hearing, Kraninger persistently avoided giving clear answers to simple questions about this management experience. Her reticence to talk about the basic details of her work on major Trump administration policies led to exasperation among a number of Democratic senators. Sen. Brian Schatz (D-Hawaii) called questioning her “maddening.” Sen. Jon Tester (D-Mont.) told Kraninger that while she promised in her opening statement to bring “transparency” to the CFPB, “your answers did not reflect those values at all.”

Warren was especially vocal about her frustration: The senator issued a scathing rebuke of Kraninger for the OMB staffer’s likely role in family separations while advising the federal agencies working on the border, and for her persistent evasion in admitting it.

“These are innocent children who might be scarred forever because of this policy. It’s fundamentally immoral—and you, you, were a part of it, Ms. Kraninger,” Warren said. She continued, “and if the Senate votes to give you a big promotion, then it is a stain on the senators who do so.” At the end of her speaking time, a visibly frustrated Warren pushed away her microphone.

“These are innocent children who might be scarred forever because of this policy. It’s fundamentally immoral—and you, you, were a part of it, Ms. Kraninger.”

In her current OMB job, Kraninger, oversees Homeland Security and the Justice Department, which issued the “zero-tolerance” policy that led to the separation of thousands of children from their parents at the border. Kraninger’s oversight of these agencies has led Democrats on the committee, led by Sens. Sherrod Brown (D-Ohio) and Warren, to repeatedly ask for clarification of Kraninger’s work on developing and implementing the family separations policy. They sent a letter to the Office of Management and Budget requesting as much a month ago, and received no response.

Earlier this week, the two senators signed on to a letter from the committee’s Democrats asking the chairman, Sen. Mike Crapo (R-Idaho), to postpone the hearing until the information is turned over. Crapo declined to do so, and during Thursday’s hearing, Kraninger still refused to give clear answers on family separations. She repeatedly said that she had no role in “setting” the family separations policy—a reference to the fact that Attorney General Jeff Sessions was the original architect.

But when asked about development and implementation, Kraninger repeatedly spoke in vague terms, explaining that meetings about the policy were had, but she could not characterize the nature of discussions she may have been part of, or advice she had given. Warren called her answers “lawyerly” and contradictory. “You said you have no role in ‘setting’ the policy, but you also can’t describe the advice you gave on the policy,” Warren said. “Which means it raises the question, which is it? You had no role, or you had a role and you can’t describe it?” You can watch the full exchange below:

🚨 VIDEO ALERT 🚨@SenWarren asks @CFPB nominee @KathyKraninger if Trump's immigrant child separation policy is immoral and Kraninger WON'T ANSWER. Warren goes on to say, Kraninger's involvement "is a moral stain that will follow you for the rest of your life." #ProtectConsumers pic.twitter.com/j4ucrQuB8m

Later, Sen. Warren returned to grill Kraninger about her lack of consumer finance experience. Warren pointed out that one of Kraninger’s only direct experiences with consumer finance came this past year, when she was tasked with drafting a 2019 budget proposal for the CFPB. In that proposal, Kraninger suggested cutting 23 percent of the agency’s total budget—about $147 million. Warren wanted to get into the specifics of what spending Kraninger would like to cut. But through one question after another, Kraninger refused to say whether she’d cut back on the bureau’s two biggest expenditures: civil servant salaries or outside contracts, including cybersecurity. She did offer that she’d consider cutting back on travel costs, which usually pay for agency examiners to supervise big corporations for compliance on the ground. Again, Warren accused Kraninger of dodging her questions.

“The only thing you can come up with is, well, maybe you’ll cut travel,” Warren said. “I know that will make bank lenders happy, payday lenders happy, but it doesn’t reflect any knowledge of the CFPB or any commitment to the CFPB’s central mission of trying to protect consumers and level the playing field.”