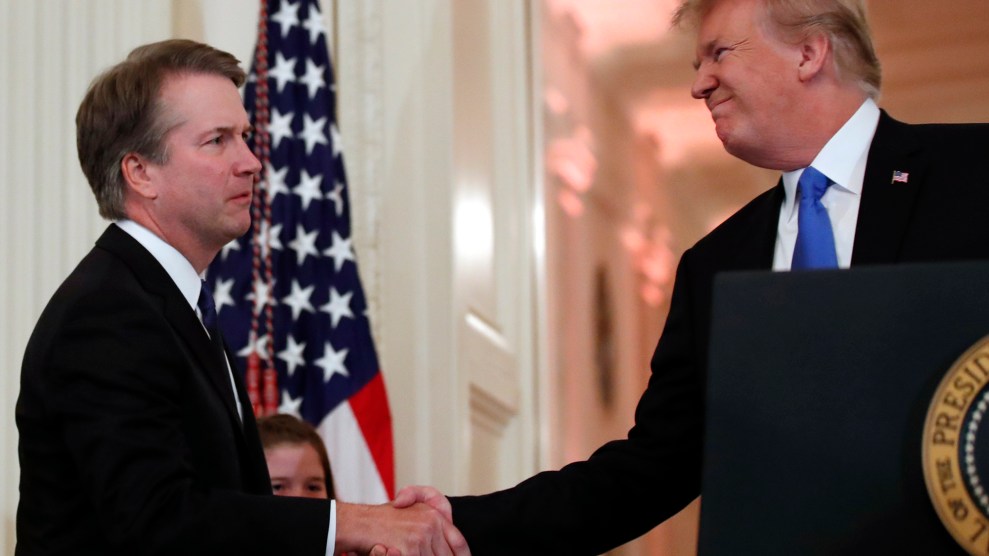 Donald Trump’s new Supreme Court nominee, Brett Kavanaugh, could determine how the court rules on cases that shape the future of voting rights in the United States. And if his track record is any indication, many Americans could be disenfranchised as a result.

As a judge on the DC Circuit Court of Appeals, Kavanaugh voted in 2012 to uphold a South Carolina voter ID law that the Obama administration said would disenfranchise tens of thousands of minority citizens. The Justice Department blocked the law, which required government-issued photo identification to vote, in late 2011 for violating the Voting Rights Act.

“The absolute number of minority citizens whose exercise of the franchise could be adversely affected by the proposed requirements runs into the tens of thousands,” wrote Tom Perez, who was then assistant attorney general for civil rights and now leads the Democratic National Committee. The Justice Department found that more than 80,000 minority registered voters in South Carolina did not have DMV-issued identification, with African Americans 20 percent more likely than whites to lack such ID.

But when South Carolina then sought approval for its law from a three-judge court panel in Washington, DC, Kavanaugh wrote the opinion upholding it. He found that the controversial law “does not have a discriminatory retrogressive effect” and “was not enacted for a discriminatory purpose.” He pointed to a Supreme Court decision upholding Indiana’s voter ID law in 2008. “The Supreme Court’s affirmation of the general legitimacy of the purpose behind a voter ID law is consistent with the fact that many States—particularly in the wake of the voting system problems exposed during the 2000 elections—have enacted stronger voter ID laws, among various other recent changes to voting laws.”

From 2011 to 2012, 19 states controlled by Republicans passed laws restricting access to the ballot. These included voter ID laws, cutbacks to early voting, and restrictions on voter registration that disproportionately targeted Democratic constituencies, like voters of color.

South Carolina didn’t present any cases of voter fraud to justify its law, but Kavanaugh wrote that such laws were constitutional despite an absence of evidence of fraud. “We conclude that South Carolina’s goals of preventing voter fraud and increasing electoral confidence are legitimate; those interests cannot be deemed pretextual merely because of an absence of recorded incidents of in-person voter fraud in South Carolina,” he wrote.

Kavanaugh’s opinion suggests that when it comes to voting rights, he would reliably side with the Supreme Court’s conservative majority, which in 2013 gutted the Voting Rights Act, ruling that states with a long history of voting discrimination no longer needed federal government approval for election changes. This year, the court’s conservatives also upheld voter purging in Ohio and racial gerrymandering in Texas.

Kavanaugh downplayed the racially charged origins of South Carolina’s voter ID law and its impact on voters of color. Members of the South Carolina Legislative Black Caucus walked out of the Legislature when the bill was first considered. After the law passed, Ed Koziol, a Republican supporter of the law, wrote an email to the bill’s author, Rep. Alan Clemmons of Myrtle Beach, saying that if African Americans were offered a $100 award for obtaining voter ID, “you would see how fast they got voter ID cards with their picture. It would be like a swarm of bees going after a watermelon.”

“Amen, Ed,” Clemmons responded. “Thank you for your support of voter ID.”

Though Kavanaugh said he was “troubled” by that racist email, he wrote that “one legislator’s failure to immediately denounce those views in his responsive email, as he later testified he should have done—do not speak for the two Houses of the South Carolina Legislature, or the South Carolina Governor.”

Voter disenfranchisement could get worse if Kavanaugh is confirmed to the court. Kavanuagh would replace Justice Anthony Kennedy, the court’s frequent swing justice. Chief Justice John Roberts would likely become the new swing justice, and he has tried to weaken the Voting Rights Act since his days as a young lawyer in Ronald Reagan’s Justice Department. With Kavanaugh on the court, the five-member conservative majority will likely uphold new voting restrictions passed by Republican states and could kill the remaining sections of the Voting Rights Act. The days when minority voters could look to the nation’s highest court for protection seem to be over.