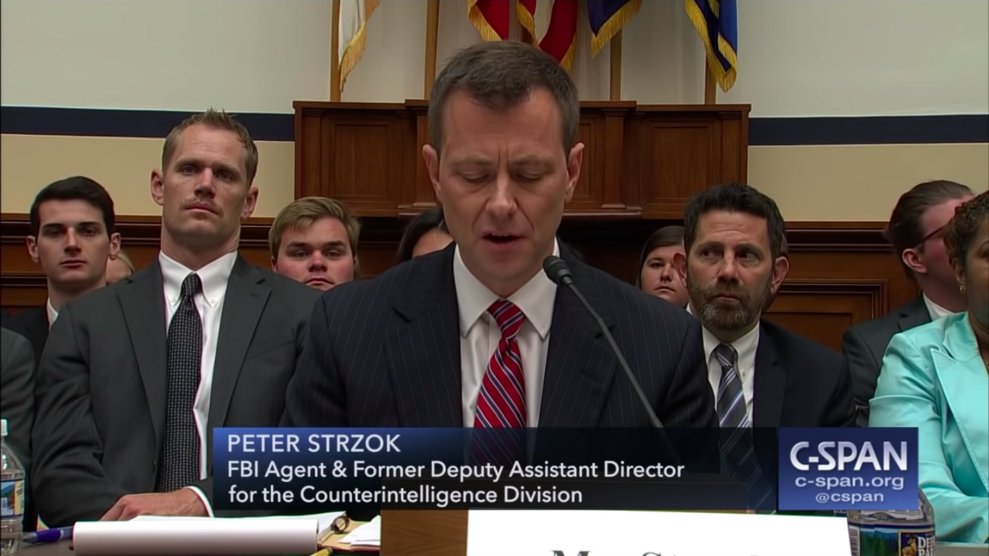 A defiant Peter Strzok lashed out at his Republican critics during a tense hearing Thursday that devolved, at times, into over-the-top squabbling between lawmakers and heated exchanges with the controversial FBI agent.

Strzok, a former counterintelligence agent, led the probe into Hillary Clinton’s email server and had been involved in the early days of the investigation into the Trump campaign’s ties to Russia. But as just about everyone now knows, he was removed from Special Counsel Robert Mueller’s team last summer after an internal investigation uncovered evidence that he had ridiculed Trump and predicted an easy Clinton electoral victory in text messages exchanged before the election with Lisa Page, an FBI lawyer. The texts quickly turned into ammunition for Trump’s public war against Mueller’s investigation. The president went on to accuse Strzok of treason and mocked him in a series of tweets for text messages Trump called “hate filled” and “totally biased.”

In a report analyzing Justice Department and FBI actions prior to the 2016 election, the DOJ Inspector General’s office wrote that Strzok’s messages, which were exchanged on FBI devices, “raised concerns that political bias may have impacted investigative decisions,” even though the report concluded that FBI leadership was not, in fact, motivated by any such bias.

The hearing Thursday was Strzok’s first opportunity to defend his conduct publicly. Here are seven key, and sometimes absurd, moments:

Gowdy and Strzok square off

Rep. Trey Gowdy (R-SC), the chairman of the House Oversight and Government Reform committee, was the first lawmaker to question Strzok. In a blistering exchange that was frequently interrupted by objections from Democratic members, Gowdy criticized Strzok for claiming that the “appearance” of bias, not bias itself, led to his ouster from Mueller’s team.

“It is not my understanding that he kicked me off because of any bias,” Strzok told him. “It was done because of the appearance. If you want to represent what you said accurately, then I’m happy to answer that question, but I don’t appreciate what was originally said being changed.”

“I don’t give a damn what you appreciate, Agent Strzok,” Gowdy snapped back. “I don’t appreciate having an FBI agent with an unprecedented level of animus working on two major investigations during 2016.”

Strzok reveals the context for his anti-Trump text messages

At the end of Gowdy’s questioning, Strzok took the opportunity to explain one of the most controversial texts he sent Page: a message from August 2016 that said Trump would not be elected because “we’ll stop” him.

He argued that “we” referred to the American population at large and he did not mean to imply there would be some shady FBI operation to defeat Trump, because there wasn’t one. Strzok said he wrote the message in light of the critical statements Trump made about Khizr and Ghazala Khan, the parents of a slain Muslim American soldier.

“My presumption, based on that horrible, disgusting behavior, [was] that the American population would not elect someone demonstrating that behavior to be president of the United States,” he said. “It was in no way, unequivocally, any suggestion that me, the FBI, would take any action whatsoever to improperly impact the electoral process—for any candidate. ”

After Strzok declined to answer Gowdy’s question about the number of people he interviewed early in the Russia investigation, Republican lawmakers threatened to hold him in contempt of Congress. “You are under subpoena and are required to answer the question,” said Bob Goodlatte (R-VA), chairman of the Judiciary Committee. Strzok responded that he had attended the hearing voluntarily, and he again refused to answer Gowdy’s specific question.

Democrats cried foul over the threat; Rep. Eric Swalwell (D-Calif.) pointed out that former Trump adviser Steve Bannon was not held in contempt for refusing to answer many questions in front of the House Intelligence Committee in February.

GOP lawmakers are growing frustrated with Peter Strzok's refusal to share details on the Russia investigation at his House Judiciary and Oversight Committees hearing.

Strzok, the FBI agent who sent anti-Trump texts, also noted that he was there voluntarily and not by subpoena. pic.twitter.com/AjqaSfyTQu

There are so, so many points of order and parliamentary inquiries

Fans of Robert’s Rules of Order probably had a field day watching Democrats flood Goodlatte with points of order and parliamentary inquiries at some of the hearing’s most raucous moments. The initial flare-up occurred after Strzok declined to answer Gowdy’s first question about the early days of the Russia investigation. Goodlatte took control in an attempt to extract an answer from Strzok, but he could barely get a sentence out amid the deluge of parliamentary maneuvers. Here’s one illustrative exchange between Goodlatte and Jerry Nadler (D-NY), the Judiciary Committee’s ranking member:

Goodlatte: The question is directed to the witness.

Nadler: And I have a point of order before he answers the question.

Goodlatte: The point of order is not well taken.

Nadler: You don’t know what the point of order is. You can’t say if it’s well taken.

Goodlatte: The witness will answer the question.

Nadler: Mr. Chairman, I raised my point of order and I insist on it.

On and on the inquiries went, resulting, at one point, in a member-by-member vote over whether to appeal Goodlatte’s decision to not subpoena Bannon.

A Republican lawmaker makes a dig at Strzok for his infidelity

“I’ve talked to FBI agents around the country,” Rep. Louie Gohmert (R-TX) told Strzok. “You’ve embarrassed them, you’ve embarrassed yourself, and I can’t help but wonder, when I see you looking there with a little smirk, how many times did you look so innocent into your wife’s eye and lie to her about Lisa Page.”

"This is intolerable harassment of a witness!"

In a chaotic moment at House Judiciary hearing, Rep. Louie Gohmert asks FBI Agent Peter Strzok how many times he lied to his wife. The question drew cries of outrage from Democratic members. https://t.co/M3YsVmNmn5 pic.twitter.com/f0nEkO5ewO

“This is intolerable harassment of a witness!” one member exclaimed. And in one of the hearings most outrageous moments, Rep. Bonnie Watson Coleman (D-NJ) told Gohmert, “You need your medication!”

A Democratic lawmaker suggests Strzok should receive a Purple Heart

If Gohmert thought Strzok was a “disgrace” to the justice system, Rep. Steve Cohen (D-Tenn.) felt the exact opposite. In his opening remarks, Cohen went further than any of his Democratic colleagues in not only defending Strzok, but in lavishing extravagant praise upon him.

“If I could give you a Purple Heart, I would. You deserve one,” Cohen said.

Democrats troll the Republican leadership by holding up provocative signs

Rep. Elijah Cummings (D-MD), the ranking member on the Oversight Committee, taunted Republicans with the early results of Mueller’s probe. Staffers held up signs with the faces of former Trump national security adviser Michael Flynn, former Trump campaign adviser George Papadopoulos, and other people in the president’s orbit who have pleaded guilty so far to charges in the special counsel’s investigation.

Rep. Cummings causes momentary stir with signs of those who have pleaded guilty, to date, in the Mueller probe — which he insists must be given the independence and resources to continue its work, and must not be undermined pic.twitter.com/dcqmF4KD4F

Goodlatte attempted to stop them, but District of Columbia delegate Eleanor Holmes Norton, a nonvoting member of the Oversight Committee, asked him to “cite the rule” that prevented this from happening, according to the Washington Post. He gave in.