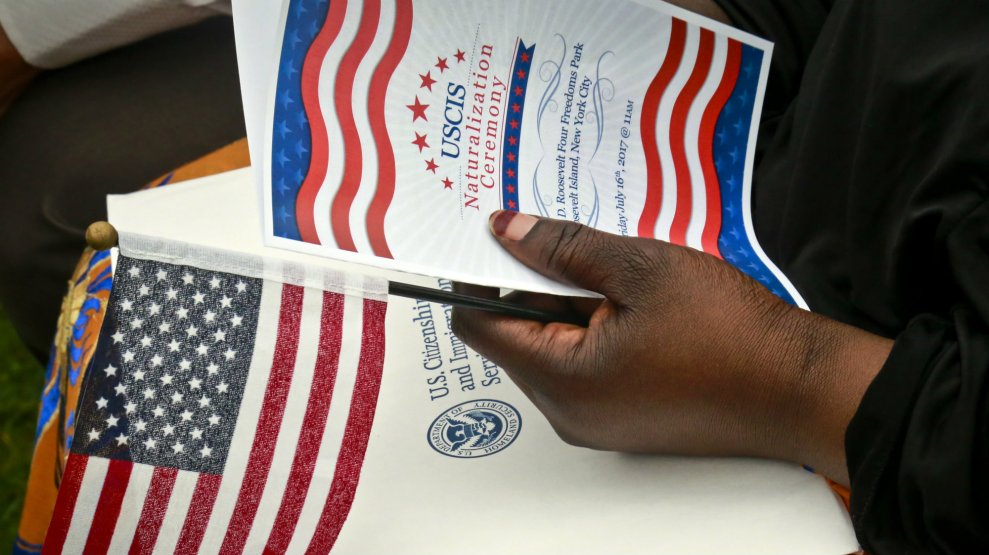 A woman holds a program and flag during a US Citizen and Immigration Services citizenship ceremony. Bebeto Matthews/AP

Earlier this month, as outrage continued over the Trump administration’s family separation policies, another immigration agency quietly introduced several changes that could threaten even more immigrants, many of them here legally, with deportation.

In a memo made public July 5, US Citizenship and Immigration Services, the agency tasked with handling immigration benefits—think work and student visas, green cards, and naturalization ceremonies—said it would now refer immigrants for deportation in a wider range of cases. USCIS has always had some deportation powers, which it can exercise by issuing a Notice to Appear, a document that begins removal proceedings and directs immigrants to appear before a judge. But typically, USCIS only issued these NTAs in a restricted number of circumstances, such as when someone is found to have committed substantial fraud. It referred most cases to Immigration and Customs Enforcement, which would then investigate and issue the NTA.

Now, the new memo gives USCIS officials the power to directly issue an NTA in a broader range of circumstances, including if they find evidence of a criminal offense or fraud in an applicant’s history, or if a case is denied and the applicant is found to be unlawfully present in the United States—a scenario that alarms many immigration advocates.

“These two memos work in tandem and are effectively a one-two punch that will render our adjudication processes even less fair and even more harsh.”

Further complicating this evolving landscape is a subsequent memo, issued July 13, that gives USCIS discretion to immediately deny any application without giving individuals the opportunity to submit further evidence or without having to notify them of the agency’s intent to deny the case. This would apply in cases where an applicant initially failed to submit required documents or failed to establish eligibility. The NTA memo went into effect the day it was issued; the second memo will go into effect in September.

While seemingly small changes, these policies could have widespread implications, potentially sending far more immigrants into removal proceedings and increasing the number of cases in an already backlogged immigration court system, according to experts who spoke to Mother Jones.

The NTA guidance alone could threaten the tens of thousands of immigrants who apply for benefits each year, such as work visas or green cards. Previously, if their application for a benefit was denied, immigrants would have the chance to appeal the decision, try again, or voluntarily depart the country if they no longer had a valid immigration status. Now, if an application is denied and the applicant loses their immigration status in the process, they could be considered “unlawfully present” and placed into removal proceedings. The changes would affect both undocumented immigrants and those who are already legally in the country.

“These two memos work in tandem and are effectively a one-two punch that will render our adjudication processes even less fair and even more harsh for people that are applying for their families, for workers to be able to come here, for students who want to stay here or change their status,” says Greg Chen, director of government relations at the American Immigration Lawyers Association (AILA). “Businesses, universities, families, and communities are going to be hurt tremendously.”

USCIS touted its NTA guidance as one that would help align its practices with the Department of Homeland Security’s enforcement priorities. “For too long, USCIS officers uncovering instances of fraudulent or criminal activity have been limited in their ability to help ensure U.S. immigration laws are faithfully executed,” USCIS director Lee Francis Cissna wrote in a statement. The new policy “equips USCIS officers with clear guidance they need and deserve to support the enforcement priorities established by the president, keep our communities safe, and protect the integrity of our immigration system from those seeking to exploit it.”

“Even people who are fully qualified, who have nothing in their past, might feel that it’s too big of a risk to go ahead and apply for that green card or apply for naturalization.”

The agency told Mother Jones that it would issue NTAs to all foreign nationals who were “removable,” or here unlawfully, but noted it would largely focus on those who had been charged with crimes or had committed fraud. Of course, how that plays out remains to be seen—and it’s unclear how USCIS would be able to prioritize one type of applicant over another. (The new NTA policy will not apply to recipients of Deferred Action for Childhood Arrivals, known as DACA, or those with Temporary Protected Status.)

The NTA guidance marks the latest step in USCIS’s ongoing crackdown on immigrants already in the country, including those who are here legally. Back in May, it updated its policies on how it would determine unlawful presence for students and exchange visitors, which could lead to harsher punishments for visa overstays. And last year, the agency introduced a slew of changes that tightened rules for work visa applications.

These moves have been paired with a ramp-up in the scrutiny of immigration applications, which makes the NTA policy all the more troubling, says Jennifer Minear, an immigration attorney based in Richmond, Virginia, who specializes in work visas and other employment-based applications. “We had already been seeing upticks in challenges by the government to legitimate petitions, denial of legitimate petitions, and crazy interpretations of the laws,” says Minear. “We’re going to see a lot of people that are being denied that shouldn’t be—it’s the fear and threat of that that’s going to intimidate people from wanting to risk the process at all.”

This new NTA memo means that “a lot of people will be too afraid to apply for benefits for which they’re eligible,” says Julia Gelatt, a senior policy analyst at the Migration Policy Institute, a Washington, DC-based think tank that studies immigration policy. She adds, “Even people who are fully qualified, who have nothing in their past, might feel that it’s too big of a risk to go ahead and apply for that green card or apply for naturalization.”

Immigration advocates are particularly alarmed by the new NTA policy because the immigration landscape is already incredibly difficult to navigate, and the guidance puts increased pressure on foreign nationals to follow the exact letter of the law, no matter how complicated that may be in practice. Diane Rish, the associate director of government relations at AILA, notes how difficult this could be for students. Those on a student visa, for instance, aren’t allowed to work beyond a certain number of hours on campus per week, and working even an hour beyond that limit could be considered a status violation. “Any small blip could be a status violation,” she says. If the student were to apply for a new visa later and officials determined the student violated their status, they could be considered unlawfully present from the day of that violation and potentially denied their application and deported.

Rish is also worried about instances in which someone’s status simply expires while waiting for a case to be decided. Immigrants on the H-1B temporary work visa, for example, can only apply to renew their visa six months before their status expires. But if a case takes longer than expected to be decided and their status expires while they’re waiting, they could now be subject to deportation if their application is denied.

Immigrants applying for visas will have to make sure they do everything possible to maintain their status and have a “super squeaky clean” record, says Minear. But, she notes, immigration law is so complicated that “honestly, there’s not any way for an average foreign national to understand they might be in violation of their status, especially when a status violation could be applied retroactively.”

While it’s still unclear how strictly USCIS will implement these new procedures, the implications are troubling, says Rish. The NTA policy “now makes USCIS, rather than just an adjudicator, an enforcement tool of the Trump administration’s deportation machine in a way that we haven’t seen before,” she says. “It’s yet another message to immigrants, ‘You are not welcome here. We’re going to make it harder for you to live and work in the United States.'”